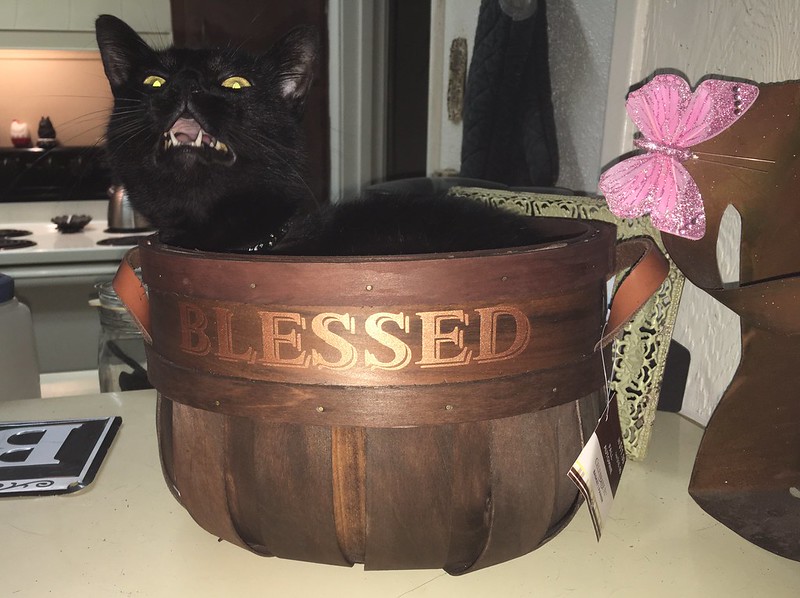 The Recipe
by Jeffrey Fischer

Look, going into this I knew it would be the worst thing I ate, worse than the time Frankie double-dared me into eating a live cockroach, worse than the spoiled milk that came out in chunks on my cereal, worse than the sheep’s intestines used in the off-brand haggis. Still, the rewards promised to be worth it.

The eye of newt wasn’t so bad, and I could choke down the gall of goat. Tongue of dog wasn’t great, and I had a hell of a time getting the liver of blaspheming Jew. I would have called it off at the finger of birth-strangled babe but Lady Macbeth insisted I follow through with it.

“Oh my God, that is awful. I’m not eating it.” I put my fork down and crossed my arms.

“Liver and onions? It smells horrible. It tastes disgusting. It’s the worst thing I ever ate.”

“Look, Mom, what can I say? You set high standards for horrible meals.” She sent me to bed without supper. It turns out liver and onions was the worst thing I never ate.

Un Accident Delicieux
It’s so fresh this chicken they sold me,
I covered it in flour, the recipe told me.
I should’ve known something was amiss,
My chicken was hairy and started to hiss.
I smacked my lips turning on the heat, looking forward to this delicious treat
I left it cooking to feed Mittens,
he was my joy, the cutest of kittens.
I couldn’t find him, no paw or hair,
So I took out the dish and ate good leg
But saw poultry on the counter, still in the bag.
I looked in the dish beside my pie of key lime,
I’d not eaten chicken, but my friendly feline.

What was the worst thing I ate?

Good question, because I’ve eaten some crazy things in my time, although to be quite honest, I’ve enjoyed most of them.

Everything from grilled snake to deep fried insects – it’s surprising just how tasty some of the more unpalatable sounding dishes can be.

But the worst thing ever was at my wedding….

You know the bit. It goes: ‘To have and to hold, for richer for poorer, in sickness and in health, till death do us part’

And she’s made me eat my words ever since.

You wonder what was the worst thing I ate?

What you have to remember is that what would be repulsive to you, is of little consequence to me. Cannibalism is, by its very nature the ‘worst thing’… But to me, it’s no different to burger and fries.
There was one occasion though I was physically sick.

That time I ate someone’s liver, with some fava beans and a nice Chianti.

I have to say that the liver was perfect: Nicely caramelised on the outside, and just the right amount of pink on the inside.

But, those fava beans… Disgusting!

I can write this because of my mother’s limited internet ability, for it’s her idea of meatloaf that is the subject of this challenge, for it is truly the worst thing I have ever eaten. Before anyone chimes in with: “I know a great recipe for meatloaf”, let me stated I’m way beyond Operant conditioning, scared beyond salvation. You see my mom’s meatloaf was stuffed with bread crumbs, not just any bread crumbs, bread crumbs left in wax paper to mature, well actually in the humidity of Chicago, to mold and selective rot. It only saving grace was the Ergot

Conversation over Dinner
By Christopher Munroe

There are different ways to interpret the word “Worst.”

It could refer to something disgusting, a flavor you didn’t enjoy, a meal you found personally unpleasant…

Alternately, it could mean “Worst” from a moral perspective, an endangered species, human flesh, something that, having learned you’d eaten it, even by accident, you could never live with the shame of…

However, at the end of the day, I’d suggest that the “Worst” meal would have to be the meal served by a poisoner, which eventually kills you.

So: What’s the worst thing you ever ate?

The Fairy Children had a dismayed expression on their sparkly faces.
“This is a healthy veggie soup,” said the Fairy Mother.
The children looked disgusted. The mysterious objects floating in the thick liquid looked rather suspicious.
“Taste it.”
As soon as the most adventurous of them swallowed some soup, he turned brown.
The suffering of their sibling was hilarious. The other kids laughed.
After holding his tummy with both arms for a few minutes, he finally threw up.
Alarmed, the mother threw the soup away.
The child winked.
And that was the end of healthy food for the Fairy Family.

A Vengeful Conversation
by Spate

You can push and scrape it around on your plate. Or you can take pretend
forkfuls followed by fake chews. Or you can try to hide it under the mashed
potatoes. But never, never even think about feeding it to the dog.

This is yours to eat.

Yes, served cold! What did you expect?! You left it dangling in the air
between us until all that was left is this dark icy shriveled empty skin of
what was.

And it’s on your plate for you.

And you are not going to leave this table until you eat every last word!

As a new missionary in the Republic of South Africa I had my room and board in the Kraaifontein Hotel, near Cape Town.
I always said I would eat anything once, and most things twice, until they brought us curried tripe and trotters. I chewed and chewed on the stomach lining but never got it down. The pigs feet stayed on the plate.
I vowed to never eat curry again.
A year later I was working in the Indian townships where every family we visited insisted on feeding us dinner. The curry was incredibly spicy at times, but always delicious.

What was the worst thing you ate?
———
On the menu of every Michelin-starred restaurant there is one item that insiders call the “dead donkey”. It is an imaginary dish, such as “allegrette des viandes”, or “cassioletta au chevalloise” and it marks anyone who orders it as an ignoramus. Of course, the chef will prepare something that this oaf will think delicious, but the waiters will all be smirking behind his back.

I must admit that in my naïve youth, I once had the misfortune to order the dead donkey. One of my wiser dining companions later explained the matter to me in private, but oh! the embarrassment!