This is Weekly Challenge, where I post a topic and then challenge you to come up with a 100 word story based on that topic: MESS

The next 100 word stories weekly challenge is on the topic of IF YOU’RE HAPPY AND YOU KNOW IT… Scroll up and click on Weekly Challenge to learn how to join us! 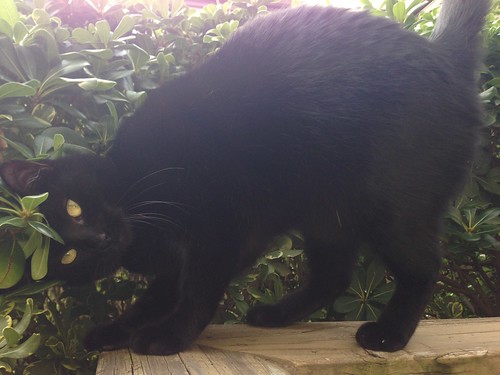 To Felix, a mess is a big deal, the biggest. He can’t relax in a room until it’s tidy.
Most people’s nightmares are about being chased by wild animals, falling off a cliff, or the like; real legit danger.
His nightmares have to do with a mess. For example he lives in a house that’s a mess, or his hair’s all messed up, that sort of thing.
Felix was ashamed it was some sort of sex phobia. Felix’s psychiatrist clarified; “That’s a dirt thing, you have order issues, see; it’s control really.”
Felix is still tidy but finally at peace.

…another fine mess you’ve gotten us into.

I suppose you expect me to bail you out ?

Fine. Bring the bone saw, fetch a rug. I’ll dismember the corpse and we can dispose of it at the quarry before coming back to scrub blood out of carpet and walls.

Make sure nobody sees you, there’s no reason for us to be here, so if no trace is found no one will suspect and in a few hours we’ll be home, enjoying a scotch.

But seriously, this is the last time I’m doing this.

I can’t clean up your messes forever…

“Another Nice Mess”
by Jeffrey Fischer

Stan Laurel and Oliver Hardy found themselves lost in the Iraqi desert. After walking for miles, they saw tents in the distance – at last, civilization! They crawled under a barbed-wire fence, where the portly Hardy lost his bowler hat, and peeked into the first tent they came to. The pair was surprised to see a military kitchen, with dozens of spotless cooking instruments, from stainless steel pots to ladles of all sizes.

Startled by the click of automatic weapons, they turned to face a half-dozen machine gun barrels. Laurel said to Hardy, “Well, this is another nice mess you’ve gotten us into.”

“Why I Tore Up the Adoption Papers”
by Jeffrey Fischer

I open the pantry door to see a carton of milk I placed there by mistake. One sniff is enough for me to know I hadn’t done so recently. Wondering what took the place of the milk, I open the refrigerator. Sure enough, there’s a pair of dirty socks. The washing machine turns out to be where I’ve placed a library book. The book’s spot in the den has a box of dog biscuits in it, which confuses me until I recall I agreed to dog-sit for a neighbor. Say, where is the dog, anyway? I peer into the dog’s crate, which contains nothing but a thawed bag of once-frozen corn. Uh-oh.

Faced with an unresponsive companion, George was forced to concede that there was little else to do other than wait, although what for, he had no idea.

As the minutes stretched out, he found himself asking how on earth he’d managed to get into such a mess. His memories prior to waking at the hospital were still patchy, at best, and as for the circumstances leading up to that turning point in his life, other than the words ‘car accident’ gleaned from the hospital notes, he couldn’t even surmise about what had occurred.

The crowning glory of my dinner party was the desert – my stunning coup de grace: Eton Mess.

A wonderful concoction of whipped cream, strawberries and crumbled meringue, lovingly folded together harmoniously to form a gloriously beguiling and deliciously wicked finale to the evening’s culinary pleasures.

It went down an absolute treat – impressing everyone.

As I closed the door behind the last departing diner, I breathed a sigh of relief and reflected on the evening’s proceedings.

Shame about the pavlova, I thought… but scooped off the floor and served with a flourish, nobody even noticed.

Don Foyer headed into the hotel shower.
He carefully placed his towel on the hook, taking extra care not to let it touch anything. He left his slippers on because he wouldn’t dare touch the floor. He couldn’t, no wouldn’t allow the germs to touch him! How vile! Disgusting!

On the other side of the city one man squeezed through the door that only opened slightly, he re-emerged gaging and shaking his head. The other men pushed through to find a mess of garbage, the stench insufferable; maggots crawled on the mail piled at the door.

Josh hardly knew her, but she declared her love anyway.
What was her obsession with him?
First time, he saw her in the car outside his job, then the store, the bar and finally, under the darkness of his living room.
“Say you want me too!”
Josh heard the crazed sound in her voice. He moved quickly towards his gun in the basket above the TV!
She took her aim in the darkness and pulled the trigger!
Shots rang out!

Ouch… the burning…
His side was hurting. He looked over, she wasn’t moving.
“How did I get into this mess?”

When he woke up, the TV was on and he saw his face splattered all over the news. The previous night was a total blur and the woman slumped on the couch of this unfamiliar living-room remained eerily silent. He wore nothing but a black t-shirt. Slightly embarrassed for being half naked, he mumbled an apology and dashed for the door, holding his pants. Don’t worry, he heard. But it wasn’t the woman’s voice. Her head rolled to a halt by his feet. At least, I got rid of one of them, he thought. Yes, one voice at a time.

Crime scene, accident, or just a simple corpse mouldering in an empty house… until the neighbours notice the smell.

Things like that leave one hell of a mess, and somebody has to clean it up… and that’s where I come in.

Blood, fluids, bones, hair and rotting organs are my stock in trade – I bag them up, scrub away the stains and you’d never know anything had occurred.

From unholy mess to pristine clean – I take pride in my job.

And as for all those bits I take away…

What do you think is inside your microwave lasagne?

Talking about my generation

Each generation strives to create its own unique lexiconic tool box. Emboldened a group of words with hype context. Those of the Mod Gen were rather fond of the word [mess]. It was used as a non-specific sum as in “I have a mess of comic books. And with the modifier [stuff] having even less specificness as in “I got a mess of stuff for Christmas.” It severed to note aimless non-productive enterprise as “ We were just messing around.” Yet in the proper setting it described critical interact as in “Don’t mess with me.” Or “Man, your messed up.”

Le Cid removed the paper and handed it to Timmy. Unconsciously Master Parsons said “Who is Laura Lin Parker?” The Dealer immediately started writing the following.

Le Cid chuckled “ Seems JFK got popped for messing with the wrong Texas Deb.” “That was disappointing,” said Tim. “Try something really hard,” prodded the bandit. “Why did my father have to die,” The Dealer’s face changed from serene to puzzled to sad, wrote the following

The noise was the first thing I notice: Entering the mess hall, there’s silverware clanging, laughter and conversation, news feeds blaring, boots stomping on the planking. The din is overwhelming me, so recently released from isolation training. 60 days alone in some netherworld sub-basement quarters at NASA.

Someone is standing by me, but I am having a tough time focusing…

“ I asked, how do you feel about your upcoming mission? Isn’t it a bit controversial, searching for life forms in outer space? What does your wife…”

I mutter, I can’t wait to leave all this behind.

Now finally we have them by their slippery golf balls! In a mess of their
own making and by their own admission: nobody of importance was sent!

Bigger than Benghazi! Stickier than some kid’s lemonade stand being targeted
by the IRS!

Why not go to Paris? I’m sure the Secret Service was up for a trip to the
‘City of Love’.

The prophet Mess Mass Abush was a humble man. He taught his people to live lives of compassion and service for all people; believers and unbeliever alike. As an example of his humility he insisted that no representation of his image should ever be made.
Unfortunately, the alphabet of his people was hieroglyphic. As a result, his name was represented as a blank square.
Over the centuries the meaning of the blank square was lost. Ultimately, disciples of the Nameless Prophet interpreted the empty space to mean, “Anyone to name the prophet should be smashed beneath a giant stone block”.

Mess
——–
We pwned the Hanover Messe this year, the largest trade show in the world. Their registrations ran on bog-standard Windows, so we hacked ourselves a free booth for a fake company. Then we brought in crateloads of wired and wireless sniffers, cracking hardware, and storage.

By the end, we’d downloaded the entire contents of 85% of the mobile phones that passed through (including Angela Merkel’s), and had access to almost everything with a computer inside. We could have wrecked the industrial robots, but we only use our powers for good.

Yes, that was another fine Messe we got ourselves into.

Thank goodness for their neighbor, Luigi. He made a mess of spaghetti and meatballs and garlic bread, and called everyone over for a feast.

They had a great dinner together, and had a good time.

Until Grampa got drunk, and talked about the war.