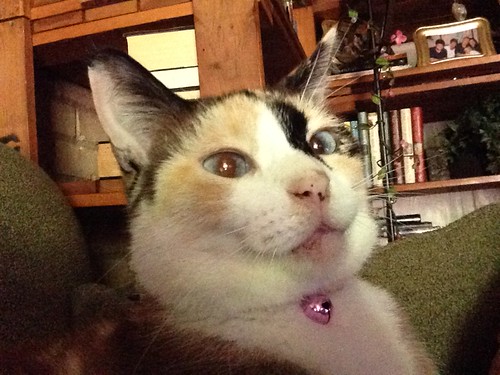 The Kid had no time for the simple courtesys of gangster etiquette. He did have a wicked sense of humor. He always asked if the mark had any last words, perhaps a short pray or maybe they had a reasonable counter offer. When the mark got the first word out of his mouth he would pop him in the eye. After word got out no one was willing to give the Kid the satisfaction of one last laugh on them. This when the Kid started doing hour long eulogies. Must guys would yell: Fuck You, at some point, then the pop.

Playing with the kids

In ancient Greece, for fun, boys would grasp the neck of a goat, occluding their carotids, and making the goat pass out. Sort of a dark choice for fun. “Carotid” is derived from the Greek word for “drowsiness” and stems from this mischievous practice. Death by strangulation is inaccurately depicted by Hollywood; suffocation takes minutes but ceasing blood flow to the brain takes a mere 10 seconds. The original Star Trek series was more medically accurate. Spock’s Vulcan death grip where a single carotid was compressed relates to a nerve reflex in the neck which pauses the heart, in seconds.

Sound Stage 2 was a kid-free zone. The director hated children.
When he realized his main actress was pregnant, he started paying alimony but fired her.
Years later, a kid asked to talk to him. He refused.
The director was then forced to work on a show for children, go figure. Yes, the kid was 14 but he was the owner of the studio.
One day the director went crazy; he abhorred kids and he would have plenty of time to dwell on that, right after the trial ended.
The studio had become a kid-free zone again, that’s for sure.

On the Job Learning
by Jeffrey Fischer

“Hey, Roger, what are you doing for ‘Bring Your Kid to Work’ Day?” Harvey asked.

“Hadn’t thought about it.”

“You have a kid, don’t you? Bring the little guy in, show him what a working stiff does for a living.”

“I’m not sure anyone would call us working stiffs, but… I don’t know. My kid isn’t all that well-behaved.”

“All the more reason – he can trash the office and make me think I’m back in the frat.”

“Well… okay. But I gotta check Metro regulations first. I can only bring him if they allow goats on the subway.”

The Joker
by Jeffrey Fischer

My colleague Steve was a joker who never owned up to his cruelty. “Hey, big guy,” he’d say “I see your folks killed the fatted calf for you.” Pause. “But you didn’t have to eat it all by yourself! Just kidding.” Or: “I slept with your mom last night. She told me I was so much better than your dad. Kidding!”

I complained and asked him to stop, but he fell back on the cliche about sticks and stones. Words couldn’t hurt, eh?

The next time Steve went on vacation, he mentioned he was flying to Cancun. I called the TSA anonymously and said that Steve had baggies of coke in his rectum. Totally untrue, but it took the TSA guys hours to reach that conclusion. My words must have hurt for a month.

Script for a departure [or, It’s not plagiarism, it’s art!]

“What if is there is no tomorrow? We should seize the day! Don’t you want to take a leap of faith? Or become an old man, filled with regret, waiting to die alone!”

“Don’t cry, Shopgirl. Don’t cry. “I know now why you cry. But it’s something I can never do. Goodbye.”

“In case I don’t see ya, good afternoon, good evening, and good night!”

[The dubious honours go to:

“The Kid” was the consummate simpleton…attributed to a flaw in his genes, or his mother’s drinking and drug use while she carried him. He was pleasant and behaved, but very gullible and trusting. The perfect playmate, as his playmates succeeded in convincing him to take the blame for all the trouble and mischief that the gang managed to conceive and generate. As he grew older, he entered politics at the local level and did very well until the scandal put him in a federal prison for twenty years. Turns out, The Kid took the rap, intoxicated by all the attention.

His dad told him to treat his girlfriends with kid gloves. Donald bought some fine, kid leather, gloves, and wore them his first day of school. The school was private, and sensitive to special needs students, so no one ever mentioned his gloves, believing they concealed some skin condition or disfigurement. Young Donald T. was very popular with the girls. They loved it when he stroked their neck or legs with his gloved hands. His pals thought it was creepy, but they were jealous of the admiration he got from the girls, and because of his wealthy and influential family.

He kidded around with mates and teachers. He believed that his humor was a bit twisted, and anyone that gave his pranks time to sink in would realize that he was being very clever and ironic. Humor gone unappreciated or acknowledged is sad, and it eventually gnaws away at the psyche of the jokester or punster…as it was in Leslie’s case. Maybe his jokes and pranks were NOT funny at all. Maybe he was under the illusion that he was clever and funny. Maybe his friends played along with him because he was prickish and they feared or pitied him.

Soft and warm: they really are the best ever.

For as long as I can remember, I’ve wanted to own a pair of proper kid gloves, but they’ve always been too expensive. Which is why I decided to make my own – although I never expected to end up running my own business off the back of them.

Business is booming, but I worry my raw materials won’t keep pace with demand.

So, I’m looking for a new school… And a fresh supply of kids.

I mean, for example, surely a gunfighter nickname involving “Kid” in any form must be something said gunfighter would inevitably grow out of, yes?

And yes, those ARE fighting words.

Thanks for the ride partner. Before you ask about the eyepatch which I wish it was in celebration of Talk Like a Pirate Day, the sad truth is I got in a scrap with a certain Billy the Kid. Billy had become addicted to old school Lucky Strikes. The day I ran out and gave him a Marlboro Red Billy spit the filter right into my eye. I’m go to the doctor to see if I can take off the patch then to look for a job without goats or at least a place that doesn’t use cigarettes as dewormer.

These gloves are nice, but won’t work for me. I have this terrible condition – I am hyperallergic to almost everything. Even lotion residue on people makes me break out in hives. It is truly awful.

Well, well! You should have mentioned this sooner. Try these here on for size. They are expensive, and I only have a few pairs left. They’re vintage; my uncle Gacy made them in the 70’s.

Wow, they’re great, like a second skin! What did you say they were made of?

Genuine kid. A pity, Uncle never taught me the secrets to making his signature gloves :(

Several people circled around Bufford and Agent Aphasia who held the open container.
The crazy haired woman rearranged her tinfoil hat and said, “Give me the ghost reservoir.”
“Ghost reservoir?” Bufford asked. “It’s a dark matter containment cylinder.”
“Bring in Gnocchi,” the old woman called.
“No one here is hungry, you old bat,” Aphasia growled.
A boy wearing a purple robe with silver embroidered stars walked into the room, his arms folded across his chest.
“Kid Gnocchi is our most powerful medium,” the old woman sneered.
The boy raised his hand for silence and said, “I feel a strong presence…”

Kid
———
Good old Mr. Johnson, always the joker. He’d stand on someone’s foot and yell at them to get off his foot. Or he’d pour ketchup down someone’s back. Then he’d say, “Just kidding!” His grin would get tighter and his eyes would go hard and people would back off.

Eventually it came out he was keeping three women prisoner in his basement and living on their benefit payments. In court, all he said was, “I was just kidding! Can’t they take a joke?”

They were the perfect couple.
Well, sort of.
She wanted kids. He didn’t.
At that point, they were going to be the imperfect couple or the imperfect family.
A counselor suggested a cybernetic child.
He didn’t want kids of any kind.
She didn’t want a pet, whether animal or robotic.
She wanted a child.
So, they broke up, and found others to marry.
She had a kid. He and his new wife didn’t.
The counselor didn’t get the commission on the robot child lease.
Eventually, the program was scrapped.
And replaced with kid gladiators.
They get awesome ratings on television.