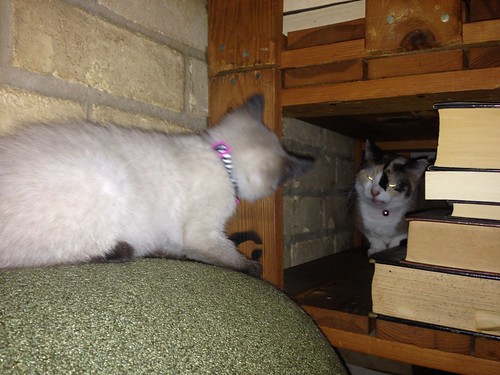 Predicting the Near Future

I am a devotee of Faith Popcorn the muse of the future perfect. I am the future. I embrace the deeper currents in Vox populi. It’s a level above seeing around corners. You see around corner that haven’t been built yet. Not an easy job letting your feet lower into the void counting on the bridge being completed as you arrive. When you Fire, Ready, Aim the world isn’t just malleable it’s damn Quantum. I’m seeing musical theater as the next Zeitgeist. To that end I am embarking on a visionary production. A music version of the move SAW.

The “event” was that day of the year when the black house demanded feeding. They tried small animals and big animals; these always came back unharmed. As revenge, the house would draw people in. They would simply disappear, only to be spit out in pieces throughout the next days. The town learned. They started with the “As”, moving on to the “Bs” the following year. It was terrifying for everyone; for everyone except for 101010010. His parents wanted to choose a name starting with an “R”. They couldn’t figure out which, so… He was extremely fond of his robot name.

I’d rather cut my own foot off than watch the movie Saw.

I’d crawl through broken glass, have my body torn in two by elaborate spring-loaded apparatus, wake up chained to the wall and helplessly watch time tick away as everyone I’ve ever loved is killed to avoid it.

I don’t want to watch that movie, is what I’m saying.

It’s the worst movie I ever “Saw.”

See what I did there? Do you get it?

It’s important to me that you get it.

But seriously, fuck that film.

At least it’s not fake found-footage…

“For my final feat, I shall saw this lady in half!” cried the magician. Rural audiences were fickle, but the “cut the lady in two” trick always brought down the house.

The trick went as planned, the magician’s assistant appeared to be divided, but the audience was oddly quiet. Finally, one old codger stood and shouted, “You didn’t saw the lady – that’s wrong!”

A second stood and agreed. “You *seen* the lady. Get it right, Mr. Magician.”

The first turned to the second. “Naw, that ain’t right, neither. He *done seen* the lady.” As they squabbled, the magician resolved never again to take a gig with a local chapter of the Pedants Club.

The Scientific Method
by Jeffrey Fischer

I’d heard the old saw that you can catch more flies with honey than with vinegar, so I suggested testing the proposition for my seventh grade science project. I placed a bowl of honey in one room of the house, placed a bowl of vinegar in another room, opened all the doors to the outside, and waited to see what would happen.

Every hour I would visit both rooms and carefully note the number of flies in each. In the first hour, I found two in each. Hour two: still two for vinegar, 27 for honey. Hour three: eight for vinegar, though I suspected several wandered from the honey room, 294 for honey, plus or minus a dozen on account of my forgetting my counting a couple of times. Hour four: maybe 15 in the vinegar room, thousands upon countless thousands in the honey room, and a painful spanking for me from my dad when he came home from work to a house full of flies.

I saw what I wanted to see, and when I wanted to see it. When ready, I chose to open the visor and view what was before me. I could hear ambient sounds, filtered to an extent, and with focused receivers. I could navigate my environment using the sound alone. Last Saturday, there was a ruckus outside my front door. Some folks were arguing, swearing, and shaking their fists. I watched for two seconds, then closed the visor. I shut off the sound, turned on the display, and watched a cartoon, while people raged outside my door for two hours.

My favorite old saw, one Jack Douglas coined, is to never trust a naked bus driver. I always volunteer this when anyone asks me for advice, regarding me as an “adult”, and a potential reservoir of wisdom. If you have any favorite old maxims, please post them here, or Tweet them. Folks will fall for anything, as attested to by the grunts and drivel of Hollywood flimflam artists, politicians, and people from England with lots of initials after their name. Another old saw is the worm drive, side-winder I have in the shop. I built a cedar shed with it.

The old saw mill was perfect – abandoned, forgotten and away from prying eyes.

Although it did present some difficulties – I’m no expert, and it’s taken me a while to get everything running again. I hope you appreciate the effort I’ve made: It’s taken over a month just to sharpen the big circular saw… you wouldn’t want it blunt, would you?

You won’t feel a thing – I’ve thought of that too. Plenty of local anaesthetic, and you won’t even know when I remove your limbs.

There won’t be any pain. But, afterwards, you may feel a little sore!

“I saw you sister this morning and I think she might be irritated with me.” zack informed his wife.

“Well she came over for Miter Box I borrowed then I gave your niece cookies for breakfast.”

“No, because the cereal vampyers drank the milk. Also because your sister is doing that whole natural foods thing and doesn’t want her daughter eating anything she can not pronounce. She could say oatmeal, flour, sugar, and eggs. I would have liked to have made her some hot oatmeal but it turns out she couldn’t say Dihydrogen Monoxide”

“I am sure I have cereal vampyres. What else would explain the disappearance of my milk right from my cereal bowl? Twice this week. I thought it might be the cat but it also happened when I used almond milk. I considered trying quinoa milk but remembered how it tastes with cereal then I feared that the vampyres wouldn’t show up that day. I told my wife I installed the mirror in the dining room to make the room look bigger. The cereal vampyers will think I can’t see the kitchen but I’ll be watching for them in the mirror.

Robert hated his job as an alchemist. All the bitter failures. So what, if diet cola (with it’s new, better tasting formula) was not the elixir of life. Nothing ventured, nothing gained…

Last week Rob’s niece was visiting, and wouldn’t stop singing “Make new friends, but keep the old, some are silver, the other gold.” Hmmmm, Maybe it wasn’t base metals that should be turned to gold, but base people!

Tonight, his eyes glittered expectantly in the neon lights of the Dew Drop Inn. Rob pondered the old and new friends he was going to make… and designed new experiments…

John plodded along on his old typewriter.
By far, the most challenging format for writers is the short story and of those; the “Drabble”; exactly 100 words.
Achieve that, and be the recipient of the prized Golden Monkey award. Deadline pressures stymied him at times into writer’s cramp only worsening the needed mindset to be creative. The weeks and months floated by, the image of the revered Monkey kept him going.
He had lost count so, one by one, he counted up his fruits of labor. Could it be? Yes, this is number one hundred- the Monkey was finally his.

Rocky the squirrel saw it happen.
Natasha lured Bullwinkle out with a donut and Boris blew him up with a round, black bomb.
Social media judged the incident as reprehensible and flooded Yelp with one star reviews of the Russian Consulate. They plastered posters on the consulate’s gate that said, “Send them to Siberia” and “Die in the Salt Mines”.
Their vigilante cries for mob justice fell on deaf ears.
Boris said, “He was just moose and I am diplomat.”
The Russian couple mounted Bullwinkle’s head in their trophy room next to a small empty plaque that said, “Flying Squirrel”.

I saw the Devil
———
I went out to the woods one night
No goblins or bogeys can me affright
I looked for my cronies by the big oak tree
Then I saw the Devil and the Devil saw me.

“Yer mates have fled to their own front door”
says the Devil, “they’ll never have sleep no more”
So I spits in his eye and I says to he,
“You can scare off my mates but you won’t scare me.”

He showed me the tortures of hell fire to come
But I just laughed and the Devil was dumb
For the Devil looked within me and saw worse than he
When I saw the Devil and the Devil saw me.

The prosecution’s case rested on a single eyewitness.
However, the defendant arranged to have a hit put out on that witness.
The witness survived, but they were blinded.
So, yes, the prosecution opened up with “Tell the court what you saw.” and everyone on the jury winced.
When the defense attorney began with “Is the prosecution seriously asking us to believe the eyewitness testimony of a blind person” the witness asked for them to speak a little louder.
“Why?” said the attorney. “You’re not deaf, too, are you?”
“It’ll help me aim,” they said.
And they shot the defense attorney.