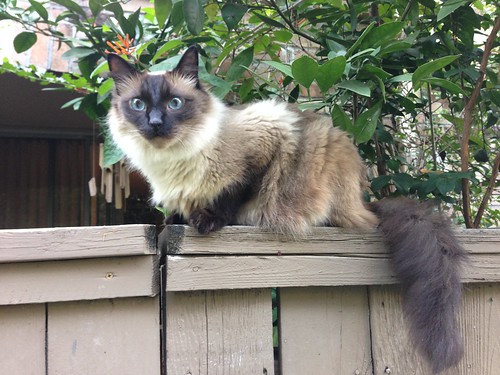 It was a beautiful night, and I figured “What the hell?”

I’m a pretty big dude, and while it was late and the neighborhood isn’t the best, I wanted an adventure walk, headphones in, and figured there’d be no harm.

Little did I know.

From the alley he leapt, and I was too taken aback even to think of defending myself as he grabbed his cheeks, stuck out his tongue, contorted his face and, as quickly as he’d come, dashed into the night, leaving me shocked, confused and tremendously vulnerable…

His mug shot was a frightening sight to everyone, including Wayne himself: unruly hair, bloodshot and unfocused eyes, assorted cuts and developing bruises, and a snarl that explained the restraints that were just out of range of the camera.

The next morning, in the harsh fluorescent light of the interrogation room, Wayne held his aching head in his hands. He was sober now, and scared. The cop on the other side of the table kept asking Wayne what he recalled about the previous night and Wayne truthfully replied he had no memory past about nine p.m. What scared Wayne the most was that the cop refused to answer when Wayne asked if he had hurt anyone. He strongly suspected the answer was yes.

Eventually the police would charge Wayne, at which point he would call his lawyer. Until then, it was just Wayne, the cop, the lights, and one hell of a headache.

Morrison was the kind of guy who made friends easily. People instinctively liked him, and he had a way of putting others at ease. He would often bring home these new friends for dinner. His wife couldn’t convince him that this was both a bad idea and inconvenienced her.

This time he could see in her face that she wasn’t pleased with his latest acquisition. “Kathleen, meet Tony. Tony and I met because I left work a little late, and took a shortcut through that alley – you know, the one that you said was so dark that anyone could be lurking in there. Sure enough, Tony was lurking. After he mugged me, we got to talking, and, well, here we are!” Morrison and Tony both smiled a little sheepishly at Kathleen. “Oh, by the way, do you have a twenty Tony could have? My wallet was a little short when he demanded my cash.”

My favorite was the white, ceramic mug I used in the service. In over three years on the base, it was never washed. It was dressed in a patina of dark roast, and the incidental coating served as insulation. I could carry a steaming cup of coffee from the lounge to my desk — with the temperature remaining stable, even on colder winter days in New Jersey. It served me well, and was disgusting enough to get a rise out of the buttoned-up, knife sharp, creased Commanders. The more they groaned and grimaced, the more I treasured my precious mug.

An obvious tale that refers to, or based on, MUG, would include mug shot. The best mug shots are the before and after shots of meth addicts. A female addict can age twenty years in two years of heavy use. Dentists won’t treat an addict because of the condition of their mouth…even the Dentists that do volunteer work in mobile clinics. I am moaning now about a loose, bottom incisor. There is some discomfort when I gnash down on something like a macadamia nut, but I can’t imagine the horror of a whole mouth full of dead or dying teeth.

Mugging was a pastime in my area of town. I was buzzed, having stopped at the diner for chili and beer. It was dark, and I started walking home, pausing for two guys hanging out near the entrance to an alley. One of them jammed a pistol into my chest. I reacted, having trained in Krav Magna with some older friends. I pushed the slide back on the pistol, preventing firing, and kicked the guy’s knee. I heard a crack. I had the pistol now, and forearmed the second guy in the throat. Both were down when the police arrived.

Limbo Laggins was most unhappy – “Hobbits”, he stated to nobody in particular, “are not cut out for quests and adventures. Ewww!”

Gingerly, he inspected what he had just stepped in – dragon poop – making him acutely aware of two important facts:

Firstly – he should have worn his boots.

A huge roar, up ahead, sent him scuttling for cover. Cursing the wizard, he realised he stood no chance of finding the Chalice of Eternal Power.

Rooting through his satchel, he pulled out his mug… Maybe, in the dark, it might just pass?

Years ago, my neighbor Ronan bought an 18th century hand-painted mug for a handsome amount. “It’s an investment,” the seller had told him.
After losing his job and struggling for years, Ronan tried to sell the mug back to the same seller. The man sneered.
“But… I paid you a fortune,” said Ronan.

Yesterday, I went to the store. Ronan was behind the counter.
“Are you the owner now?!”
He nodded.
“Where’s the other guy?”
“I don’t know,” he sneered, while taking a beautiful long-knife from my hands. “Don’t buy this, it’s a fake.”
Yes, Ronan is a good man.

Everybody in work knows not to touch my mug – it’s a special mug, with sentimental value.

It’s been with me since day one: Seeing me through three promotions, numerous job changes and one disciplinary.

It’s been my constant companion throughout countless meetings, focus groups, late finishes and early starts – that mug has outlasted many of my colleagues and has been more reliable than anybody I’ve worked with.

Best of all – it’s the perfect size for my coffee.

So, when the new guy broke it, I had no choice, I killed him.

I have to go now… Time for my mugshots.

Clara’s Sister-in-law confided that she hated her husband’s big ugly mug. Clara hated it too. One day her brother had been splitting wood. Clara saw his big ugly mug and she picked up the splitting maul then accidentally hit the big ugly mug roughly forty times. “Oh no, that mug was a gift from his mother.” cried her brother’s wife. Clara put away the maul then calmly explained that her mother gave it to him because it was ugly, her husband hated it too but wouldn’t give away a gift and how this accident that made everyone happy was unavoidable.

I was fortunate to attend a seriously well-to-do high school. Just one of those random rolls of good fortune on my parents’ part. Not only did we have art classes, we had a master potter in residence. Before a student was allowed to throw on the wheel they had to master the Zen of Coil Pot Construction. The coiled form I made was a six inch mug with walls 3/4 of an inch thick. I was a miracle it didn’t explore in the first firing. After the second firing my teacher ask for it to put in the school’s permanent collection

We used to live in a zero lot-line house. In the backyards there were small portions where the were no house walls and were filled in with a six foot high walls for privacy.
Neighbor’s cats used to scale them to get into our yard and poop in the grass.
I found that putting baby oil along the top of the wall kept the cats off.
I’ve always wondered, how many babies does it take to make one bottle of baby oil? Do they render down a burlap sack of them, or do they just collect their drippings in mugs?

Mug
———
There’s a fad in geek circles recently for drinking your food. A complete food replacement in a bottle, it saves all that irksome chewing and swallowing, not to mention the drudgery of cooking. Soylent was the first, then Joylent and Purelent. The latest is called Queal.

These people certainly have a way with words. Purulent queal! I’ll have a steaming, suppurating mug of that! Freshly expressed mucus from the nether parts of hand-reared Komodo dragons, fermented with rotting mussels, mixed with live tadpoles and bottled. At least, that’s what the name suggests to me.

When I was a kid, my mother used to make soup in a pot on the stove, and we’d eat it from bowls.

Then, when we moved into a house with a microwave oven, she still used the pot on the stove. But I’d use a casserole dish with a lid in the microwave. Still ate it from a bowl.

When I was on my own, I’d use an oversized coffee mug in the microwave. Only had to wash the mug and the spoon.

And the microwave, too. Because I keep forgetting to use a small saucer as a lid.