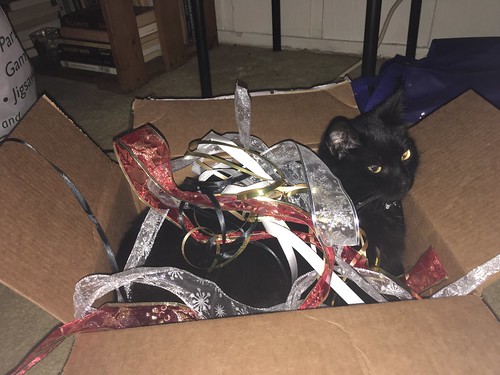 In the new year, I’m going to like me.

I’ll look upon myself, upon my works, and strive to honestly like what I see, to take pride in those aspects of myself that I deserve pride in, to see those aspects clearly, rather than depending on the validation of others.

I’ll self-validate, because I’ll know my own approval is the only approval I’ve ever needed. And, in doing so, I’ll finally allow myself to be happy.

Obviously, this won’t happen. My self-loathing is far too internalized by this point.

Still, I will try.

Honestly, I don’t believe in resolutions. If you feel the need to change something for your health, business, home, etc., it shouldn’t wait until the New Year. Resolutions are broken inside of a month. Fat people say they won’t stuff their face, will walk two or three more miles a day, and this lasts until the weekend when they find themselves saying fukit and cramming a bag of chips or cookies in their face. Adulterers swear that the last jump of the bones will put an end to their affair. Bollocks. A good resolution would be to stop making resolutions.

I hope to dream more in the New Year–more dreams of spirit animals, like wolves and owls. I will write down the dreams when I awake and train myself in lucid dreaming so I can more easily control my place in the dreams, what I can do, who I see, and what I can reveal. I strongly vow that if I pull my pistol in the New Year, I will be using lethal rounds and aim for main mass rather than a knee or foot. Also, lastly, I plan to expand my swordsman’s skills in and about the county.

In 2016, I resolve to eat better. You look a little skeptical, so I’d better explain. I don’t mean I want to eat a *healthier* diet – heavens no. I want to upgrade the *quality* of what I ingest. Foie gras instead of pate with the taste and consistency of cat food. Single malt Scotch aged until it’s old enough to drink, and not bottom-shelf rotgut whose age statement is measured in days. No gristly hamburger, only Kobe beef, preferably using cows that Mr. Bryant himself massages.

Of course, affording this lifestyle change could be a challenge, which brings me to our meeting today. Hand over your valuables – this is a stickup.

Passing the Time
by Jeffrey Fischer

“The worst part is, he thinks it looks good.”

“Well, he’s wrong. Hey, how about the chick in the maxi dress? Those colors are ghastly.”

“Nice look if she’s a hippie in 1969.” John and Melanie were on the Metro, on their way to a New Year’s Eve party, playing their game of “spot the fashion disaster.” It was a target-rich environment.

“Wait a sec, John. Didn’t we resolve to be nicer to other people in 2016? We decided the snarky comments had to go.”

“Right, absolutely. No more snark….Technically, though, it’s still 2015 for a few more hours. I say let’s not hold back.”

“Oh, good! See the guy with the cheap fur hat? Looks like a rodent landed awkwardly on his head…”

I can’t say my schooldays were pleasant. I was frequently the butt of jokes because I had one of those faces only a mother could love: Huge sticky-out ears, and a massive nose earned me the nickname ‘elephant Man’; whilst buck teeth, pebble glasses and shock of ginger hair did little to improve things.

After leaving school, I resolved to change my fortunes. Hair dye solved one problem, corrective surgery and laser treatment sorted out my eyesight and nose, whilst a small fortune in dental treatment fixed my teeth.

True to form Bernie dutifully made out his resolutions for the coming year. There was the usually ones concerning weight and health. The social ones about keeping in touch with friends and family. All pretty pedestrian, until he got to resolution 15: Raise an evil army for global domination. His girlfriend Ruth helpfully pointed out he had misspelled domination. “Thanks Honey. That most assuredly would have raised serious doubts among my minions.” “You might want to rethink that “minions thing” that term has been co-opted to the cute. How about Spawn of Darkness?” Bernie gave her two thumbs up.

A Letter on Believing

“Sometimes, there are things in life that make us struggle, that turn each day into an uphill battle.
Then, sometimes, someone shows up and asks “are you okay?”
Sometimes, a question as simple as this is all it takes. The world seems to change, to shift just a tiny bit. Sometimes, that is the difference between struggling to stay afloat and moving on.
I don’t really have to tell you that I’m not ok. You know.
And you encourage me, you encourage me to believe.
Believing that life can be ok again is a good start, isn’t it?
Thank you.”

Nobu was a brave samurai warrior, his loyalty unwavering. He had served Lord Yamamoto well and was held in high regard by him and all who knew him. After two years away from home, Nobu was eager to see his wife and infant son, but before he could return to his family Yamamoto fell in battle and his army was defeated. Nobu survived but he could not avenge his master’s death. The bushido code demanded that he take his own life in seppuku.

As he drew his short-sword he hesitated. Who will take care of his family? How could he abandon them? Yet honor demanded that he do so. Should he drop the sword or drop to his knees and end his life? Nobu closed his eyes and said “Gomenasai.”

When it came, it was unexpected, vicious, bloody and brutal.

The mercenaries I’d secretly trained proved to be a force to be reckoned with, overwhelming defences and rapidly taking control throughout the country. Any opposition was met – on my instructions – with ruthless and swift retribution. Many lives were lost and much blood was spilled.

January the first: A new dawn, and a new regime in power, with me at the helm.

Unfortunately, the whole thing was a misunderstanding – a terrible mistake, arising from my poor understanding of English.

It should have been resolution… Not New Year’s revolution!

“I will lose weight, become better educated, get a higher paying or most socially prestigious job, do more work around the house, and keep my car clean. I will buy fast food with younger son twice a week and buy him really cool Transformers collector toys to give as special occasion gifts. I will buy elder son’s girlfriend San Jose Sharks gear next Christmas. Sorry family, none of these work. I plan to keep with tradition of not making promises I might not keep. If I ever change my mind, I will definitely write my own New Year’s resolution list.

Henry the red tailed hawk pigeon had no fear of competition from his old friends and family. They were as normal and ordinary as any pigeon could be–no goals for self improvement, no changes in diet and excersize, no new years resolutions.

While Henry had chosen to rise above his lot in life and join the ranks of the raptors, his former companions had done more than only declined thier chance at self improvement, they had designated themselves as his prey.

Henry’s new years resolution would be to show his former friends and family he was serious about his transformation.

At the beginning of the millenium, I made some New Era Resolutions.

On Talk Like a Pirate Day, I made some New Yarrr! Resolutions.

When I went a bit deaf, I made a New Ear Resolution and got a hearing aid.

Last year I went wildebeest hunting. It was my Gnu Year Resolution.

Working in the civil service, every year I’d make a New Year Regulation. But as a card-carrying anarchist, I was actually working in secret for a New Year Revolution.

This year, I’m going to take up craft brewing. It’s my New Beer Resolution. Let’s drink to that!

“The name ‘United Nations’ is oxymoronic,” said the outgoing ambassador to his replacement. “The only way you’ll make a difference is to prevent others from pushing a their barbaric agenda in the name of peace. And every time you try to solve a problem or fix an injustice, someone else blocks your efforts and claims that they’re doing the same.”

The ambassador handed over the keys to the office and a folder of draft resolutions. “It’s your problem now.”

He then headed to the airport so he could spend New Year’s at home.

Does it really matter?