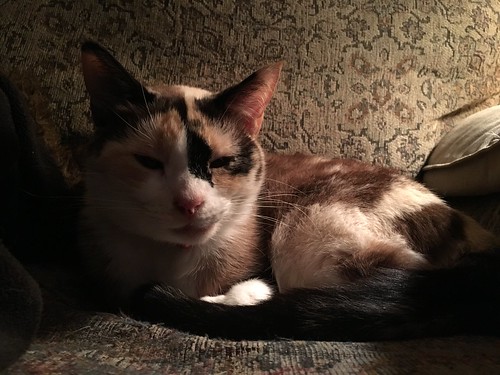 It’s been said that ,Fact is stranger than fiction.

There is a South America bat that lives in Andean caves that can neither see nor hear. It navigates by its acute sense of smell and actually lures its prey to it by imitating insect pheromones in the gas that it passes.

There is a six toed, brown, tree sloth that is so fat and moves so slowly that they have been captured and used as throw pillows without having to kill and skin them.

In retrospect, since I made up these examples, maybe fiction is stranger than fact.

There Will Be Hell to Pay

Nearly all hope way gone when the stranger road into the valley. Mary Ann
was the first to see him, and like wild fire that sighting ran through the
town. He didn’t say a word as he tied the pale horse to the front of the
dry goods store. He whisper in the ear of Old Ezra, who sent Young Ezra to
the backroom for the case of silver bullets. The stranger carefully loaded
seven colts and made his way to the sheriff’s office. Propped in a chair
outside the jail he waited for dusk. When darkness fell, they came.

People are strange, when you’re a stranger.

Faces look ugly, when you are ugly.

Women seem wicked, when you are wicked.

Streets are an evil place, when you’re evil.

When you’re strange, faces come out and are strange.

Or something like that. I’ll admit, I’ve never paid close attention to the song.

I did enough drugs in high school to believe Pink Floyd were the greatest band in history, but I didn’t, and will never, do enough drugs to believe that Jim Morrison was a poet…

The stranger ambled into the village. His eyes shifted left, then right, but he saw no one. This was the first habitation he had found in days, and he was hoping to restock his food and water with the little cash that remained.

He opened the door to the general store and was assailed by the smell of death. A woman, presumably the proprietress, lay on the floor in a state of decay. He bent over her, trying to discover whether her death was from natural causes. Pustules on her face suggested some kind of pox. It wasn’t a stretch to think the rest of the village shared her fate.

With no wasted movements, he took the supplies he needed and set off. The next few days would show whether he also brought anything unwanted with him.

Stranger than Fiction
by Jeffrey Fischer

Robert Heinlein was a towering figure in the Golden Age of science fiction. He wrote for children as well as adults. He wrote space opera tales of rockets and colonization of the Moon and wars with aliens, but he also wrote on more serious themes in his “future history” series, and in later novels such as “Stranger in a Strange Land” and “Time Enough for Love.” Many teenaged boys were fascinated with the themes in these books, perhaps not least that of removal of restraints on sexual behavior. An endless parade of hot, willing women seemed like a good idea to the mind of the teenaged male. Unfortunately, as they were to learn, that particular conceit might have been the biggest fiction of all.

My shaman was a total stranger when he first started teaching me how to get high without drugs. He sold cars, but he accumulated some money, and had a nice house in the hills. His method used crystals and stones. When placed on various chakras, including The Kundalini, my shaman would wait until the stones absorbed the forces, then he would pick the largest stone and make a tea out of it, drinking it down quickly while it was still full of all the essential juices. Those of us in the class thought he was a bit of a perv.

When I was in kindergarten, Mum admonished me about talking to strangers. She described Stranger Danger saying I was destined to get accosted, kidnapped, beaten, killed, then gang raped if I talked to any strangers. She put the fear in me early on, as I was wary of speaking to anyone at all if I were out alone, or if I got separated from either parent when shopping or out for a walk. After school today, I was at the corner and a white van pulled alongside. The driver motioned to me to get inside. I never uttered a word.

She grew stranger and stranger as the years passed and as she continued smoking crack. She lost things as she moved through the aisles at Walmart, and by the time she was at the check stand, she started screaming and babbling that someone stole her baby, her dog, her purse, and her coat. She would curl into a tight ball, tuck in her legs, curl up on the floor, and bawl until the manager and assistant manager put her in a shopping cart and took her to the parking lot. Crazy Daisey was never locked up or ordered into rehab.

Bart bragged about getting a bit of strange when he was in England. He went to a dance in Hoddesdon, and met a pert young lady. When he approached her and asked her for a dance, she told him to fuck off. He busted out in laughter and I suppose she was so shocked by his reaction, her defenses were dropped, so they danced for the rest of the night. He slipped her a couple of Roofies he always carried in a little, metal pill box he wore around his neck, and it was straight to the snooch in minutes.

After the many trials he’d endured so far, the hobbit was no stranger to danger, but this was by far the closest he, or his companions had come to death.

Hurriedly, Boggins started stuffing his pockets with gold, only to find, with a sinking heart, that the weight made it impossible to run.

Another roar, this time closer, filled the forest and, suddenly, his travelling companions appeared, fleeing for their lives.

“Do something!” they cried, tearing past.

Then the dragon was upon him!

Flinging handfuls of gold as far as he could, the hobbit shouted: “Fetch!” before diving for cover!

I fondle the soft, black, knitted ski mask in my left hand, the piano wire stretched between two wooden grips in the other.

Puzzle pieces dropped in chats over time belied your identity. Sincere and sweetly seductive declarations shared between us were only means to your satisfied end. Now, I’ll have mine. No, you’re not the first.

The Greyhound hums and closes the gap; have your fantasy with another. You’ll be mine soon.

My garrote, my equalizer; your size and strength no match. I’ve known the ultimate orgasm as fingers claw at the unrelenting strangle-hold, bleeding, eyes pleading. You really never knew us.

My best friend takes me down rabbit holes now and then. Most of the time I don’t even realize she’s done it until we’re already falling. She takes my hand, and leaps headfirst down, and I can’t help but be pulled along with her.

But I like that sensation, free falling towards an adventure, even though I’m terrified to jump. Too many people in the past pushed me down the rabbit hole but didn’t jump.

Now I like the thrill when things get curiouser and curiouser. Strange and then stranger.

It’s not an adventure, unless things get a little weird.

That person, staring at you as you squirm uncomfortably on the bus.

That person, pressing in, far too closely, as you wait in the queue.

That person, waving their fist from behind the wheel as they cut in front at the junction.

That person, who bumped you, spilling your drink, before melting into the crowd.

That person, you wave to across the street, only to realise – acutely embarrassed – you don’t know them at all.

That person, you pass in the subway, without looking before hurrying away.

That person: The perfect stranger, nameless and faceless.

That person, is me.

When the gods were new, they assembled together to know what they should do.

“I have made a strange thing,” said one. And he showed a vast universe of whirling balls of fire.

Another said, “I will make a stranger.” And he punctured that universe with many holes, and inside each he showed that self-same universe reflected.

A third said, “I will make yet stranger.” On a tiny lump of rock he created a host of small figures that fought among themselves, and took themselves to be gods.

“This is the strangest thing,” they agreed. “Let us call it ‘Man’.”

“I’m sorry,” said the stranger before hanging up.
She was perplexed. Probably a wrong number, but still… a bit creepy.
When she turned off the light, she didn’t notice the slight creaking of the entrance door and a shadow walking towards her bed. Drowsy, she only felt a slight sting on her neck.
No one ever saw her again.
The only thing they found was a card on her nightstand saying “Gone”.

She would come back, years later. She too would call someone to say “I’m sorry”. That was the price to be free. And she had to pay it.

I’m a stranger in the eyes of myself. All the hopes and dreams of my obnoxious youth has faded in the cold harsh rain of reality. Dis-barred, dis-enfranchised, dis-owned, dis-loved, dis-respected, simply dissed by every level of society. The words of truth carry a very heavy price, because the words will not be heard by the weak, cursed by the enfranchised, and dismissed by those who actually own literally everything we take for granted. We bought into the lie of freedom and justice for all, when in reality, there is just the fictional liberal boogieman we are trained to kick.

After I paid my bill and walked out the door, there was a homeless guy standing there asking for help.

Which explained why I got a fortune cookie at a shoe repair shop.

And it wasn’t as much a cookie as an orange rind wrapped around shoe cardboard.

The fortune was written on it in shaky block print. The same as the bum’s sign.

I helped him into the street with a kick to the ass.

One thought on “Weekly Challenge #511 – Stranger”