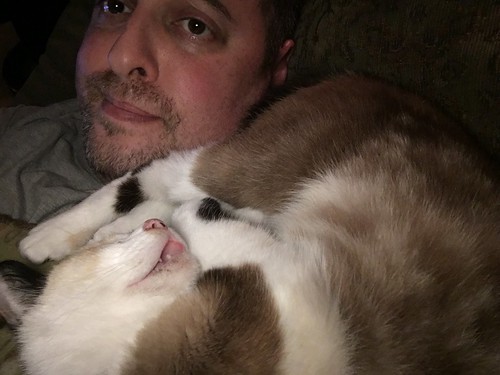 Every four year there’s an extra day in February.

As I’ve no doubt you knew without me pointing it out.

What you may not know is that, when that bonus day comes, I spend it in a church.

This might come as a surprise to those of you know me, as if I’m not atheist as such, my agnosticism with regard to a supreme being leans heavily in that direction, but there it is, in spite of all you might have thought…

For one day every four years, I have religion, because I’m willing to take a leap… of faith.

A few weeks ago L.E.A.P., or The Low Energy Assistance Program, opened their doors, and have since attracted dozens of new clients in town. They offer shots, pills, tonics, electrotherapy, a special diet, and a ratio of 1 trainer/guide for each two members. Some of the medications used are on lists that mention cautionary use, and other items dispensed are kept as private interactions between the LEAP attendants and the program’s clients. Ass hide glue pellets, bi hu (house lizard), and stinkbug (kiu xiang chong) have been used, but contraindications have surfaced and these are being withheld until further study.

The Lower Extremity Aerobic Program (LEAP) just began last week at our local Y W C A. Aerobic programs such as this concentrate on the lower extremities as the primary motive force in building heart strength and lung capacity. No muscles below the thigh are used during the rigid course of repetitions and the challenging positioning of the lower limbs, and joints. The ankles and toes are the point of focus for the day’s exercises. The last two, outside phalanges on each foot must be removed prior to training. Special shoes are also required, but are available at cost from LEAP’s in-house commissary.

Tomorrow is Leap Day, in case you’ve forgotten. It is customary that women propose on Leap Day. A man is expected to get circumcised or re-circumcised if he refuses a marriage proposal on Leap Day. Four years ago, my friend, Tim, refused a surprise proposal from his Irish girlfriend, Heather. At thirty-two, he was kidnapped and taken to a Rabbi in Philadelphia where he was circumcised for the second time by an old Rabbi with palsy. He could never play the trumpet after that time, and to this day, when Leap Year comes around, he cowers in his room, shaking.

Ludwig Mandelbrot was the foremost scholar of time. Using ever-more precise measurements, he calibrated the passing of a second to sub-atomic precision. When a gravity wave passed over the Earth, he made subtle adjustments to ensure that a second took exactly a second to pass, no more, no less.

Similarly, he calculated each orbit of the Sun to an exact degree. Not content with adding a leap day every four years or so, or even adjusting for leap seconds now and then, he added and subtracted milliseconds, then nanoseconds, then picoseconds with wild abandon. Eventually he confused himself as to what day it was.

Or at least that was his excuse to the IRS as to why his tax return was late.

Look Before You Leap
by Jeffrey Fischer

His mother always told him to look before he leapt. Although this seemed like good advice at the time, he wondered if it was universally applicable. Were there occasions where looking ahead of time was likely to be a bad idea? He considered the question the next time he needed to clear a large puddle on the curb. Looking was clearly a good idea. He considered the question again when he dove with Acapulco cliff divers – nope, looking was necessary.

At long last, he thought he found the ideal time to ignore his mother’s advice: when hurtling one’s self off a tall building in order to commit suicide. That was a freaking long way down! He turned around and meekly made his way to the ground the slow way, via the elevator.

I gave the command, and we made the leap into hyperspace – the stars froze, becoming streaks on the viewport, then the strange, inside-out feeling as the ship almost immediately began to decelerate.

Suddenly the ship was rocked violently, throwing us across the bridge.

I gave the order to return fire, but this would be no picnic – enemy lasers shone out in the darkness, and the ship was taking heavy fire.

Right in the midst of battle, I heard a shouted command: “Supper’s ready!”

I paused the game – victory could wait until bedtime.

We always laughed at Jimmy Jones – the Leap Year Kid – having the misfortune to be born on February, twenty-ninth led to endless ribbing.

“Hey Jonesey, ya big three year old! Get back to nursery school”, we’d tease; “Isn’t it time for your afternoon nap?”

I can’t say he took it particularly well, especially since we carried on the mockery into adulthood: “Sorry Jonesey, this is a man’s bar – why doncha go play in the ball pit?”

Of course, he had the last laugh.

Now in my seventies, I swear he doesn’t look a day over eighteen!

He was a man who always embraced the conventional wisdom. Not one to
wander too far from the tried and true. Cautious, Calculating,
Conservative in action. The rock others depended to be immutable in a
capricious universe. But here he stood squarely between the horns of a
dilemma. Clearly the rational choice while practical and profitable lacked
a depth of satisfaction. In counterpoint the irrational choice while
incredibility satisfying was an indictment of everything he held dear. In
the end he chose a leap of faith, and for better or for worst became a
quite different man. He chose love.

In the category of leaps the standing broad jump seems at first glance a
candidate for oxymoronic land, but if one were to closely examine the need
to leap, there is not much of an opportunity to tap into stored kinetic
energy. Oddly enough to be successful at this event both length and
compression is needed. On the line you get as tightly packed as possible,
arms, legs, chest. Then drive upward to full extension. You don’t stop
there. You pull your knees to your chest, fly forward like a cannonball.
The landing is rough, but you’re guaranteed to place.

Benny was old for his age. He was 14 going on 56. It wasn’t because he was
young of heart or hyper extended adolescence. He was born on Feb 29, a
leap year baby. Each year on the 28th and 1st his family would throw these
two day unbirthday parties. Double the presents, double the ice cream,
cake and clowns. As an adult he continued the practice to legendary highs.
One year he rented the whole god damn Ringling Brothers Circus. Another
one aboard the Titanic II. For his 15th birthday there are plans to book
the International Space Station

Life, you said, was passing you by – you wanted something more fulfilling, less of the routine, more excitement.

“You’ve got to learn to live a little”, I said, “have fun, try new things, take the occasional risk.”

Even so, I was pretty surprised when you took my suggestion seriously, although when it came to the crunch, you were starting to get cold feet.

“Look, I said – bungee jumping is perfectly safe – consider it a leap of faith.”

And, six and half seconds later, you hit the ground.

Maybe I should have tied the knot tighter?

The red leather toe of her shoe made tiny figures in the air between her and I.

“Want to know something?,” she said. “I’m really only seven. I was born on Leap Year Day.”

I looked at her black hair as she sipped. The evening felt inevitable, like a movie I’ve seen already.

“Yes,” she said, and her toe stopped. “Have you ever slept with a seven year old girl?”

She stood up, her dress the shimmering blue promise of tomorrow’s rain.

“Just leave that. We can’t take anything.”

The two ran outside to join the mass of people hurrying down the street.
The military crammed as many as they could in their vehicles before speeding away.
“Hop in,” he said, dragging her towards one of the trucks.
She shook her head.
“We are going to die if we stay.”
She pulled her sleeve up, and a blue light popped up.
“I am like them.”
He was speechless. Then he stretched out his arm. “To be with you.”
She injected him.
They never looked like humans again, but they were still together.

Adages for a happy life.

Never chew off more than you can bite. The mouth was created, or evolved to be, the appropriate size for efficient consumption. Consume food, and life’s challenges, in reasonably sized pieces.

Don’t walk faster than you can run. It’s got to do with body mechanics and efficiency. You’ll go a lot farther, in the long run, if you just walk at a reasonable pace.

Never look before you leap. What are you going to see, anyway? Crocodiles? The distance is too far?

You’ll never accomplish much if you let fear, or death, hold you back.

The planet Triselii orbits chaotically about three suns, spending a few orbits around one, then around the other binary pair. Not only do the years vary drastically in length, but also the days. Nevertheless, their astronomers have decreed a standard year and a standard day, to which are added leap months, leap days, and leap hours, so that midday always coincides with the closest sun being at its zenith, and the seasons fall at consistent times of the year.

So complex are the calculations, that they believe mathematics would never be developed on a planet orbiting a mere single sun.

The salmon run along the Columbia River isn’t much of a run anymore.
Dams block the migration of salmon back up the river to their spawning
Engineers built spillways and fish ladders that allow the salmon to leap from pool to pool, until they rejoin the river on the upside of the dam.
Some rivers use siphon pumps and trap elevators instead of the spillways, but the goal is the same.
Whatever the technology, I prefer to use a net at the entry point.
Let’s collect up a few big ones and take them home for dinner.
Delicious Salmon!