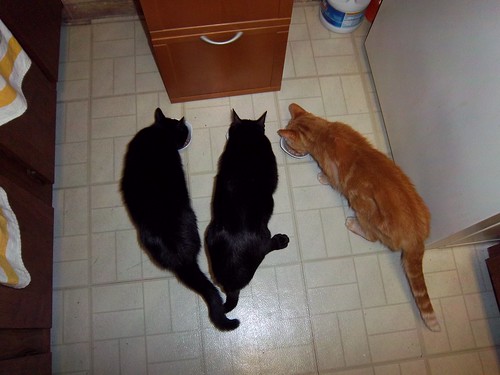 The blinding sparkle of local street lights contrasted with the deep shadows of dark street corners.
The army tank looked eerie.
Everyone knew they were about to lose the war.
The others were all over town with their soldiers and their heavy artillery, blocking the roads and asking for ID as if they owned the place. The others controlled the comings and goings while everyone tried to lead a normal life in the middle of utter chaos.
What gave them hope was the fact that someone was somehow setting those tanks on fire. One by one. They’d never give up.

He laid down the aerosol, and stepped back to admire his work.

He cut rather a strange figure, balding and bulbous nosed, surrounded by the youths in their low slung jeans and hoodies.

“What do you think lads?”

The boys nudged each other, one or two stifling a laugh.

“Sorry grandpa, graffiti’s moved on since your day. That tag of yours… Well, it’s just not up to standard, mate. You just ain’t one of us.”

He sighed. Maybe he was too old for this now.

Hands stuffed deep in his pockets, with head bowed, Kilroy shuffled off down the alleyway.

When the Circus Comes To Town

In 2165 New York City declared standard graffiti to be the office type
face of all city documents. LA followed and soon would Chicago, Houston,
greater Seattle and finally as far as Nome and the far islands of Hawaii.
Lawyers hated it cause you really could go below 24 points. The paper and
print companies love it. Not to mention the spray paint manufactures. I
can’t say I was fond of it, but vax populous rules. As in all things,
fashion reared her ugly head and by the turn of the century it was back to
Time Roman. Back to boring.

The Circus Comes to Town

The old posters, weathered and defaced by graffiti, proclaimed in the
standard advertising prose of their vintage time that the circus was
guaranteed to amuse, that the tights of the lady who danced on the pony
would sparkle as she galloped through a ring of Real Fire, and that the
entertainment would be blinding in its ability dazzle. The blithering
blandishments continued on into tinier and tinier type until they lost all
readability.

The old barn on which the posters were plastered had not been used in half
a century, and the road had been replaced, far from local view.

See the dust twinkle and sparkle with inner fire. Magical and precious, there are few things as potent and powerful as ground unicorn horn.

It’s pretty wasteful, of course. The only way to get the horn is to kill the beast, and they’re not exactly small animals. That’s an awful lot of pony left over!

Mind you, meat is meat.

Butchered, minced and turned into sausages, nobody complains about the quality, especially at the prices I charge, and I’m doing a pretty brisk trade in burgers too.

In fact, I’m making more from selling the meat than from the horns.

Billbert scratched his head and said, “I guess the standard response would be, ‘Of course you would know your own boy friend’.”

The goth girl smiled, nodded her head, and straightened her jacket with sparkles and ponies pinned on the lapels.

“Are you a blithering idiot?” Linoliumanda stood up and pointed at Billbert. “He’s not Rhineheart. His name is Billbert and he’s my boy friend.”

Billbert realized he must be grinning like a fool when the girl asked him, “Does something amuse you?”

“Yeah,” he said. “I’ve never had a girlfriend before, and now it looks like I have two.”

Don’t call it graffiti, Rico said. Call it street art.
Mixing glitter with the paint produced the best sparkling unicorn ponies.
How does he make it glow at night like that?
Fluorescent paint needs a blacklight, right?
“Phosphorescent,” said Rico. “There’s a difference.”
Rico’s not book-smart, he hasn’t been to school in years.
But he watches YouTube videos, arts-and-crafts and science stuff.
Why the sparking unicorns?
“Girls dig them,” grins Rico. “Their daddies pay me to spray up their bedrooms.”
The little girls invite Rico to their tea parties with their stuffed animals.
The big girls offer something more private.