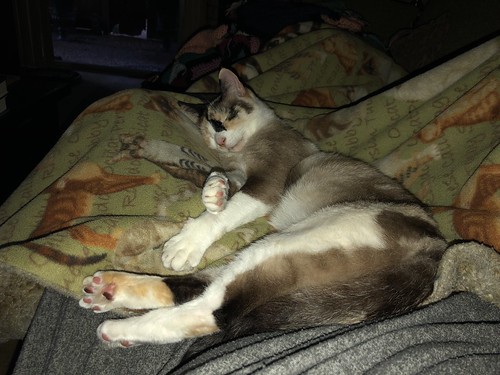 A Cirus Life for Me

Nancy Volt was billed as the “Human Lighting Rod”. She performed, if one could call lighting up like a Christmas tree performing, for Gill Brother Circus during the 1920’s. The high point of the act was when a random member of the audience was picked to give Nancy a peck on the cheek. The sad rube would make contact a blue plasma arched across his lips follow by a 10 foot backward ride through the air. When the circus disbanded in down state Illinois. She married a farmer in Olney, IL. Had three kid with electric blues eyes.

“Yes, I hired it.”
“You hired a heart attack?! How can we hire a heart attack?”
“Talk to it and settle for an amount. Easy.”
The prosecutor looked at the judge. The judge shrugged.
“When did you talk to this heart attack then?”
“Two months ago.”
“And it said it would kill your boss?”
The defendant nodded.
“Are there many heart attacks around doing hit jobs?”
“No, there’s only one.”
“And what’s its name?”
“Cock-eyed Paulie.”
“Ah, that’s why your boss is still alive.”
The room burst into laughter.
A few weeks later, the prosecutor died of a heart attack.

“Strip!” was the stern command.

I gulped. Offering personal services for hire on Craigslist, you never know what your customers may be like, and this was probably the most intimidating one so far.

Dressed head to toe in latex, she stood before me, invading my personal space, giving the distinct impression that she was very much in complete control of whatever happened next.

However, I’m made of stern stuff, and a domineering customer wasn’t going to faze me.

“I’ll get right on it “, I said, climbing my stepladder.

“And once I’ve stripped this wall, I’ll start painting the hallway”

Shock humour is all the rage these days – YouTube has thousands of ‘prank’ videos, where unsuspecting victims are subjected to terrifying ordeals in the name of entertainment.

It’s only a matter of time before somebody dies from the shock.

Which is how I came up with my business – ‘Hire a Heart Attack’.

It’s simple: You pick a victim, send me their details, and I surprise them with a scenario so shocking they have a coronary!

It’s a fantastic birthday surprise! I’m also available for other occasions; and if they don’t pop their clogs, you get your money back!

Wanda rolled her eyes. “Don’t have a heart attack. It’s not like I had to hire a private eye to figure out that Billbert has super powers.”

The bell rang telling the students lunch would be ending in ten minutes. Billbert scratched his head. “How did you figure it out?”

“Simple. I live down the street from Linoliumanda. I saw the two of you fly by my house on Friday night.” Wanda shook her head. “You don’t need to worry. I’m not a rat fink. I won’t tell anyone else. Be careful, though. Some would like to weaponize your ability.”

Nancy hired the strippers for the bachelorette party.
They were dressed as first responders.
A paramedic, a fireman, and a policeman.
“We heard there was a party emergency here,” said the doctor.
And he pulled a Bluetooth speaker out of his bag and started the music.
The bride-to-be had so much fun, she forgot to take her pills.
The heart attack dropped her like a stone.
Nancy dialed 911, while the paramedic stripper said he’d taken first aid classes.
“I know CPR!”
Well, not really. With the first compression, the sweaty hunk crushed the patient’s ribcage and finished her off.