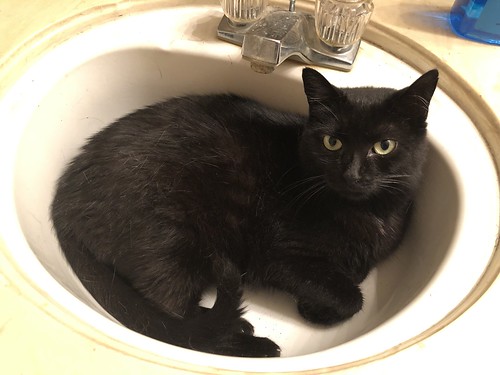 The trouble with religion – no matter which brand – is the level of devotion demanded from those who choose to follow them.

You’re either spending time being charitable, or performing ritual obligations to honour your selected deity.

Those vague promises about the afterlife, eternity and absolution are all very well, but in the absence of proof, it’s a lot of embarrassing mucking about when you could be doing something more interesting.

So, I’m starting my own religion, and the only devotional act I require is that you fill the collection plate… After that, you can believe whatever you want!

He was devoted to his hobby and he had the best tools. He looked up. Days under the blazing sun hadn’t discouraged him. The pole had to be perfect for the challenge. It took him a while to accomplish his goal but he chopped it off. A blaze of sparkles scattered in all directions as the pole hit the sand.

What followed was a lot more impressive than a few sparkles. He didn’t even see it coming.

The military knew nothing while the media spent weeks debating if there had been any victims of that misguided bomb.

Billbert obviously didn’t know when to shut up. Though he could barely breathe through his constricted throat, he wheezed, “Marrissa clearly doesn’t have the devotion for you that you think you have for her, or she wouldn’t have asked to meet me at the dance.”

Tony blinked his eyes as if considering a possible response and then slugged Billbert in the stomach and pushed him backward onto the grass.

Billbert clutched his stomach and lay in the middle of the soccer field. He watched Tony turn and run to the busses in time to climb on before they drove away.

“That’s so touching”, people say, and I suppose there is something special about a little dog that sits with utter devotion at their owner’s graveside.

People stop and give me treats, blankets and food. The local newspaper even ran an article about me… ‘Faithful companion, even after death’.

I’m happy to let them think what they want, but at night, I sneak back to the warmth of my own kennel!

My vigil has nothing to do with devotion, love or loyalty.

I’m just waiting for the body to rot so I can make a decent meal of the old bugger!

Seek Now Reason Within These Walls –

In Matters of religious consistency do not expect satisfaction when questioning practice to purpose. As a child I was on mission to get my grandfather out of purgatory. To this end I took my entire piggy bank of change and dumped it in to the metal offering bank below the bank of tiny votive candles. Lit all of them. Next day I get call into the principal’s office. I get I through dressing down for nearly burning the church down. I said if you didn’t want them all lit why did pull so much out there. No reply to that.

The security cameras show the girl’s valet unit pushing her out of traffic before the truck destroyed it.
Is it possible for a robot to be devoted? Or is it just programming?
We reassembled the damaged valet’s memory core and installed it in another unit.
It booted up and greeted us, and asked to see the girl.
The girl ran up to the valet, hugged it, and thanked us for fixing her friend.
She seemed to be completely devoted to the valet.
So, we shut her down and began analyzing her memory core.
Devoted companion robots will make a fortune.