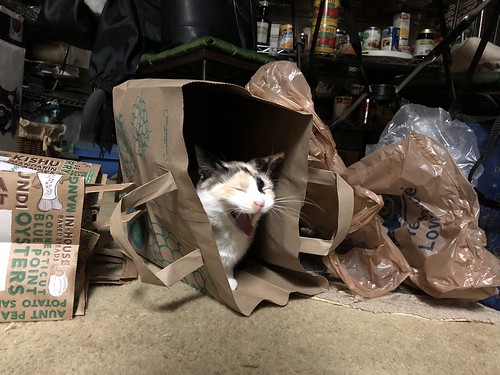 Surprised by Ms. Frunsio’s request, Billbert could only shrug. “Okay. I guess.”

When Linoliumanda started to follow, the principal held up her hand like a traffic cop and said, “No. Just the boy.”

At the side of the dance floor, Funsio turned on Billbert. “I saw that guilty look on your face when the lights came on. Tell me what you had to do with this fiasco, and don’t lie. You could easily be caught in the web of your own deception.”

“My what?” Billbert was truly confused.

It was the mid-80s and the river of money was running deep in Bay area. Unfortunately my oldest friend had moved to the center of dying America. Farming communities in the Midwest were being depopulated by the effect of the Clean Water Act. He had bought a failing cake shop and gave it his all for 3 years. With a wife and three kids Dan was always on the edge of going under. On one late night call he told me he would measure the level of gas in his car to compute his current net worth. Times were tough.

He sat on the edge of the bed, transfixed, as I slowly removed, first my blouse, then slipped out of my skirt.

I swear he was drooling as I snapped off my suspender belt straps, then slowly and sensuously began to roll my fish net stockings down, and off, dropping them carelessly on the floor at his feet.

His eyes filled with lust as I teased off my lingerie.

Then lust became horror, and disgust, as I produced a scalpel, and began peeling away my skin, exposing the muscle and sinew beneath.

I beckoned to him…

No one had ever seen such a gigantic bug. The Mayor met with the police to come up with a plan. There was panic in town. And then came the models. The bug’s wings flapped and flapped, creating a swoosh that made every aspiring model in town shake their manes. The others looked perplexed. The town was on the verge of collapse and they struck poses? Suddenly, the bug flapped its wings faster and everyone ran for shelter. Well, not the models. The bug flapped away, while the models waved their arms in the air. No one saw them again!

The Gospel According to Norman – The Parable of the Fisherman

Verily I say unto you, there was once a fisherman who spent his entire day casting his net over the left side of his boat, yet caught no fish.

His companions sat at the lakeside laughing at his fruitless efforts. Later that day, the Master came walking towards him upon the surface of the water.

“My son, you must have faith – cast your net over the other side, and believe”

The Master returned to the shore, where the disciples were waiting with pizza, fries and cold beer.

“Can you believe that guy?”, said the master, cracking opening a bottle.

My Uncle Bob said if you cast your net wide enough, you can catch pretty much anything.
My Uncle Steve said that using a net to catch anything wasn’t very sporting.
Use a hook and bait. Now that takes skill.
Neither Uncle Bob nor Uncle Steve would catch any fish.
So, Uncle Jerry would pull out a stick of dynamite, light it, and toss it over the side.
A whole lot of dead fish would float to the surface.
He’d scoop them out with Uncle Bob’s wide net.
Uncle Steve shook his head. “Dynamite’s not very sporting, either,” he said.