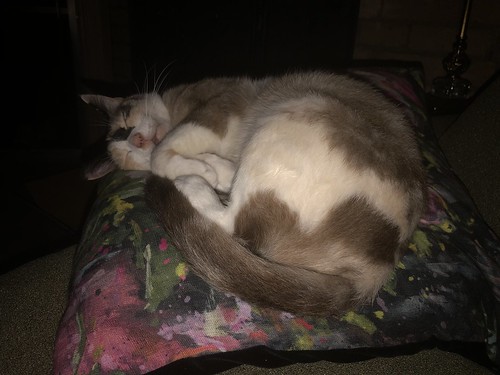 Just as Billbert thought the principal was going to come unglued on him, he was saved by the girl’s PE coach.

Ms. Gastrock climbed onto a small table and shouted, “Okay boys and girls. It’s time for a little game I like to call, ‘Mix and Match’.”

The students never found out what the game entailed because, as the coach drew in a breath, the table, obviously less sturdy than the coach believed, collapsed beneath her weight.

The principal rushed to where Ms. Gastrock lay on her back.

Billbert took advantage of the distraction and slipped away to find Linoliumanda.

Balance is a Bitch –

Sam grew up on the north-side of Chicago. No sane parent was about to let a kid bike through those streets. Wasn’t going to happen. One of the selling points of this parent’s move to the south subs was he could final have a bike. “Here,” proudly presented Dad. A red Swing fit for a six year old. “What are those?” protested Sam. “Training wheels. They’ll make the bike sturdy.” Ok, thought Sam and took off with dad’s left hand on his shoulder. When dad let go, Sam listed hard right then did plowed into the sidewalk. “Done think so.”

The cave hideout stank of bacon. Whoever was there had cooked himself a hearty meal.
The treasure, however, had to be moved.
He tiptoed inside. A lamp sat by the side of the entrance and lit the way.
When he reached the spot, he shoved a few chests aside.
“It’s not here.” In a frenzy, he dug through the sand. “It’s not here.”
That’s when a sturdy little man waltzed in.
“You want the cave? You can have it. I bought myself a new crib.” And he waltzed away.
Throwing a pebble at his head didn’t do a thing, unfortunately.

Sturdy
———
Her proper name was Amélienne, but when she grew up to be a heavy-set little girl, and not the delicate, wispy aristocratic ideal of a daughter, everyone mocked her with a commoner’s name. “Sturdy Jane! Sturdy Jane!” the other high-born children jeered, while imitating her stumpy gait, until her parents hid her away in the servants’ quarters.

She learnt a great many things among the servants, who became as friendly to her as if she were one of them, and not Amélienne de Coucy-Sancièremont et Carabonne.

Her parents were the first up against the wall when she led the revolution.

You should always pick a sturdy beam, from which to suspend the hooks. Too often, people under estimate just how heavy a dead human body is, and the last thing you want to happen is to have your ceiling brought crashing down, due to an insubstantial fixture.

Why hang them in the first place? I hear you ask. Which shows how little you know!

The best flavour comes with air drying and a curing process that can’t be rushed.

If you want second rate meat, by all means, throw it straight in the freezer.

But I have more refined tastes.

Arthur was a furniture designer, and he insisted on making sturdy furniture.
When Arthur was young, his father died in an earthquake, when some flimsy bookshelves fell on him.
So, he was obsessed with bracing everything and sturdiness.
He came up with the perfect balance of strength and portability.
It wasn’t pretty, and some of it was downright ugly.
The military bought some of his designs, and he became very rich
He built a mansion, and filled it with fancy furniture.
None of it used his practical, ugly designs.
So, when an earthquake hit, Arthur died under a flimsy bookshelf.