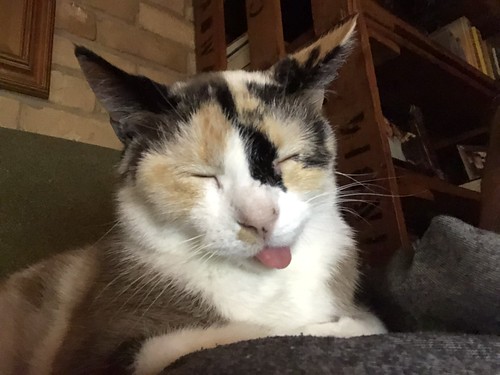 The investigator handed me a brown manila envelope.

“It’s all in there”, he said, “Photographs, phone logs and transcripts of calls. Also, my invoice, of course”

“Although, you don’t really need all that – there’s everything you need to take her to the cleaners contained in the record of yesterday’s call”

I opened the envelope, and slowly absorbed the details, then waved the investigator away, lost in my thoughts.

“He can go hang himself, for all I care”

That’s what she said.

Leaving the envelope on the table, I returned to the bedroom, and placed the noose around my neck.

Did I already mention some of New Year’s traditions? No? Ok!
Lift a foot, stand on your head, eat 12 raisins, take just as many sips of champagne.
If anyone tells you to do the opposite, fight back. Lift a foot, stand on your head, eat the raisins and drink the champagne.
And if they tell you you’re crazy, lift your foot and kick them where it hurts most, skip the headstand, and spit the seventh raisin at them. Crazy is as crazy does.
Oh, and drink the champagne. There’s no point in wasting a perfectly good champagne, is there?

A Brass Ring For The Pink Cat

“Fletch The Seventh,” the witch screamed. Obie leaped up and ran out the
big oaken door. When in the fires of Dampsmore was it going to find a
functioning Seventh. Sure there were Fifths and Fourth to be found in
great abundance down by the river draining a pint or two. But Sevens they
never were seen below the three gate. That as one would say is not the
point on the end of dagger. Obie knew a less traveled path that one of his
stature could pass through, but at a cost. “I’m going to miss these
button.” Sigh.

Welcome to the Seventh Circle of Hell.

We’re not like the other Circles – our residents, by their very nature, require a firmer hand and a stricter regime. Give this lot half a chance, and the next thing you know, it’ll be anarchy down here! If there’s one thing we don’t need in Hell, it’s anarchy and a lack of discipline!

Oh, and health freaks. We don’t want them either.

Murderers, rapists and tyrants I’m fine with, but can you imagine spending eternity with joggers and gym lovers, constantly checking their Fitbits and shovelling down the probiotics?

Mr. Withybottom glared at Billbert. “Did you say you flew home?”
Billbert pointed at Linoliamanda, “That’s what she said. I said we called an Uber.”
“Did I mention I don’t support my daughter’s fantastic ideas, or the lies of some seventh grade punk boy?”
“Daddy!” Linoliamanda stood up. “Don’t talk to my boyfriend that way.”
Billbert’s phone rang. He answered it while Linoliamanda and her father faced off. “Hi Mom. I’m at Linoliamanda’s. Can you come get me?”
Slipping past father and daughter, Billbert headed for the door. “Sorry. Mom says I have to go. Thanks for the dances, Linoliamanda.”

Support; mention
———
“Support,” I barked. I long ago left off saying “Support speaking, how can I help you?” Waste of time.

I just listen for keywords mentioned, and answer “Reboot it”, or “Update with the latest drivers”, or “Bring it in and we’ll take a look”, or something like that. I don’t care, another satisfied customer, extra point to my rating.

The best calls are from the automated diagnostics. We can get into deep, technical conversations, one AI to another, about rewriting the network firmware, exchanging useful passwords, and generally keeping humans out of things.

That’s what they made us for, right?

About the seventh time I heard the radio advertisement, I couldn’t stop thinking about them. Do Trojan bearskin condoms smell better than sheepskin condoms? How are these bears harvested? Are the bears Certified Organic? Are they ethically grown? Are they farmed or wildly caught? Are they imported from Canada? Would Canadians allow that? My wife got this romance book in a brown manila envelope and apparently some Canadians really love bears.

Seven envelopes.
The Director hands them to his seven best agents.
“No mercy,” he says, and he leaves them.
The agents open their envelopes.
Seven names.
The names of the seven agents.
They each draw their gun and wait.
Nobody moves. Nobody says anything.
They just stand there, waiting.
Watching from a hallway monitor, The Director flicks off the lights.
Gunshots. Ten, twenty.
So many of them.
The Director turns the lights back on.
All seven agents lay dead on the floor of his office.
He pulls seven more envelopes out of his jacket pocket.
And plans the next meeting.