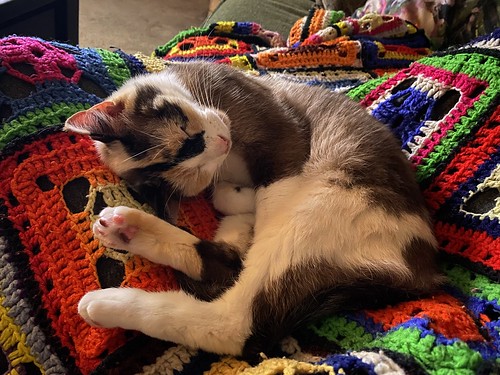 I covered my walls in tinfoil so my enemies couldn’t find me, but fearful that I needed more, I extended it throughout the house, and covered the windows and doors in a double layer.

Still concerned, I wrapped the garden, followed by the exterior of the house – you can’t be too careful, after all.

But I was still vulnerable in the outside world. So I tinfoiled my car, made tinfoil clothing and carried a roll of tinfoil with me wherever I went.

Within a matter of days, my enemies had found me.

“What gave me away?” I asked them.

I recall the fresh sandwiches wrapped in tinfoil, the extra juice in a clear bottle, Agatha Christie’s books packed in twos just in case I could read a whole book in a few hours.
The stubborn folded chairs, the clean towels, and the golden sand, sneaking through the seams.
The waves, the wind, and the seagulls fluttering about, announcing a storm.
“It’s your turn,” someone said.
I look at my pieces and I have nothing but an apple. The tray beams with words, but my only thought is… The sun still shines. They are gone… But the sun still shines.

Tinfoil
———
Did you know that tinfoil isn’t actually made of tin any more? The aliens have got wise to it, y’see. They can’t broadcast thoughts into your head through tin, so they’ve replaced all the tinfoil in the world by this alien metal called al-u-min-um. What sort of word is that, ancient Egyptian? They’ve even put a whole fake history of al-u-min-um into Wikipedia. Still called tinfoil but it’s transparent to their thought control rays.

Anyway, I’ve got a source of genuine tinfoil, rarer than gold these days. Buy one of my proper tinfoil hats, wake up and see the Matrix.

They laughed at Old George in the ramshackle house at the end of the street, with his crazy theories and his tinfoil hat.

They laughed when he told them the government were beaming microwaves into our brains, frying our minds and controlling our thoughts.

They laughed even more when he spoke of the coming new world order, and how the reptile overlords in positions of power would one day compel us to be their slave drones.

Yes, they laughed at Old George in his tinfoil hat.

But, believe me, not one of them is laughing now.

Led Me To Your Taker

You see that guy over there with the tinfoil on his head? It look quite fashionable, in a retro sort of way. No, why is he wearing a tinfoil hat? To prevent alien thought control from turning him into zombie meat puppet slave, who will blindly do the bidding of his overlords the Zorss. Come to think of it that might not be a bad idea. I’ll ask him if he has any spear foil. So Ruby wanders over to the guy. They talk. He come back all disappointed. What I ask. He said it boast the signal from his planet.

As Billbert approached the Fararri, Marissa and an older man, who looked like he might be her father, got out to meet him.
The man held out his hand, not to shake, but to stop Billbert in his tracks. “I’m Joey Albragetti. My daughter says that you can fly. Before I let you take her for a ride, tell me, how do you do it?”
Billbert cleared his throat. “I wear a plastic bag. It gives me super powers.”
Mr. Albragetti scoffed. “Right. And I wear a tinfoil hat to communicate with space aliens. Tell me the truth, boy. Now.”

I remember when we had to wrap tinfoil around the radio antenna to get a better signal.
The same worked for the television antenna when we wanted to get a better picture
So, why were people wrapping their heads in it to block signals from the spy satellites flying overhead?
Based on experience with radio and television, you’d think people would realize that amplifies signals, not blocks them.
Instead of keeping the government out of their heads, they were making it easier for the government to read their minds.
Not that they had anything in there worth reading, mind you.