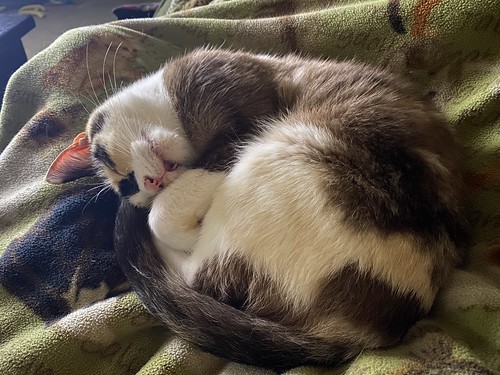 So, I totally forgot a cat photo last week… I make at least one mistake every week, whether it’s the cat photo or not changing pitch on Planet Z or copy-pasting a topic wrong. It happens, and life goes on.

The radio was on and a tired voice repeated their names. These were the names of poor souls lost forever.
The authorities tried to warn everyone. No one cared. Everyone continued to do as they had always done.
The tears came first. They thought it was due to too much exposure to flash lights.
And then they simply disappeared into thin air, as happened when the light is turned off and darkness takes over.
The radio repeated the names because they were considered missing persons, but they weren’t missing. They were gone. They were gone into unbearably impossible killer selfies.

“To hell with the critics!” I shouted, throwing the newspaper across the room, I stomped to the drinks cabinet, and poured myself a large whisky.

What did they know about acting anyway? Closeted away with their typewriters in their smoke filled offices, and only let out when the editor wanted fresh blood to spill across the theatre pages.

Every director knows it’s an impossible task to impress a critic, besides, it wasn’t even me at fault: The cast was rubbish.

Resolute, I headed back to the rehearsal, I’d make those kids perform a decent nativity play, if it killed me!

“Mind if I take a selfie with you?”

I knew you’d agree. I’m sure it’s something you get asked countless times a day; one of the downsides of being a screen icon. Yet still, you wrap an arm around the shoulders of your adoring fan, and smile happily for the camera.

But, surprisingly, you’re not smiling now?

I know the cable ties are painfully tight, and the bruises will now be starting to throb, but surely you can make the effort to squeeze out one little smile?

It’s only a selfie, after all.

And I am your number one fan.

Soon Cabin Fever Will Take ME

Bernie want to do the impossible selfie. Something so beyond the pale it would leave the great part of the world slack jaw in wonder. The first order of business is where to take the shot. The next was who should be in the frame, for though selfie implies singularity, it is all but that, include a vast array to persons. The last element is the distribution of this seminal work of art. You might think the net would be the logical place, so pre Corona. Viral is the new viral. Bernie is calling it Bernie 19. Not funny dude.

Billbert and his father watched the Fararri drive away. “Okay son. I know you’re young and you didn’t mean to do anything wrong. But the mistake was made and now you have to do the needful thing and go pack up your room. We’ll be in another state by Monday morning.”
“This is impossible, Dad. I’m a teenager. I can’t just pack up and move,” Billbert whined. “I’ve got friends here, and a math test on Monday.”
Mr. Wienerheimer shook his head. “It goes with the territory. Maybe next time you’ll be a little more discrete when using your powers.”

How do you take a selfie?
Simple, really.
Hold up the phone, tap the reverse camera icon, and smile.
You can put your phone on a selfie stick and use voice commands, too.
But a lot of places ban selfie sticks. They’re dangerous, right?
And people will use voice commands on you.
“Put away that selfie stick!” for example.
Maybe they’ll take it away and break it.
Maybe they’ll grab it and try to shove it up your ass.
As you lay there, in agony…
People will run up to you.
Not to help. But take a selfie with you.