NOTE: Yeah, I messed up the file this morning. Fixing it now… thank you for the heads up, Tura… we cover each others blind spots. Teamwork! 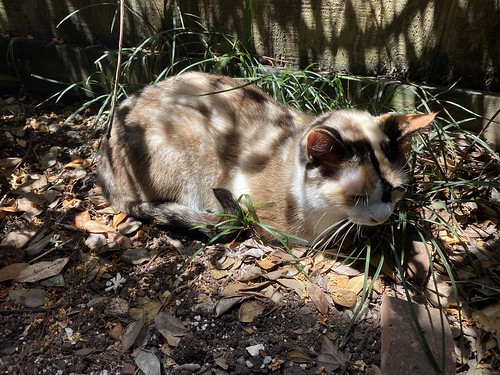 Lessons in Ecology? No one would dare. He knew far more than all of them put together. He’d spent decades studying the subject. He was “the expert”. And he was damn proud of that too. He’d lectured all over the world. He had written so many books that he’d forgotten most of them. These books had been translated to languages from all over the world.
So, when that rash started, he blamed it on the new exotic plant, a gift from a colleague.
He was certainly not an expert on Psychology. He didn’t count on something as simple as jealousy.

Howard scratched irritably at the rash. What had started as a small patch was spreading, and now covered the better part of his body. The skin was raw and red, and the more he scratched it, the worse it got.

He felt his tongue swelling, and knew that he needed to get help: Unfortunately, here in the middle of the forest, he knew that help was too far away to be of any use.

With horror, he felt his airway constricting… He wasn’t going to make it.

I have been called many things.

A criminal: Inhuman and evil. An aberration.

But I’m not any of those things; dig deep enough into any person’s psyche, you will find they’re just the same as me. The only real difference is that I choose not to hold that aspect of my character in check.

I remember one day in art class, as a child, my teacher said true greatness could only be found in unfettered self-expression.

I took her words to heart.

And now, as I look upon the destruction and pain I have wrought.

An Audience of One Magic in the Time of Corona —

Since you asked … I’ve been doing a deep drive into aberration mnemonics: characteristic that deviates from the normal type using elaborative encoding, retrieval cues, and imagery as specific tools to encode any given information in a way that allows for efficient storage and retrieval. I’m work on peg words to build a magical card stack. So far I have 52 pairs that mark position with in a deck of cards. Simon Aronson the late Chicago Card Master came up with the stack. Among magician this is a Jedi level under taking. If done deftly one can do the Impossible.

“Rub Marissa out?” Billbert exclaimed. “That’s a little rash, isn’t it? Besides, I thought the Albriagettis were the ones in the mob. Where do you get that idea?”
Linoliumanda didn’t hesitate. “It’s only reasonable they receive justice equal to the near catastrophe they wrought.”
Billbert laughed. “There’s an aberration in your thinking. If they nearly caused a catastrophe, they should nearly be rubbed out. How do you suggest we do that?”
“I don’t know. Maybe, shoot at them but miss?” Linoliamanda suggested.
“How about if we consider it for a moment, then decide it is not only illegal, it’s insane.”

Wrought; plinth
———
I conceived a magnificent sculpture in wrought iron, a maze of twisted and interwoven members, featherlight in appearance, massive in substance.

The base was to be of architectural granite. I searched all over Europe for a quarry that could provide stone of the quality I demanded, and travelled to the likeliest candidates to inspect their workings. Eventually I made my choice, and drew out on the rock face a block to be cut for me and shipped.

But then lockdown happened, and no-one knows when they’ll start work again. I can only hope that one day my plinth will come.

It started with a rash.
Janet rubbed aloe vera on it.
But it didn’t go away. It got worse.
When she tried to make an appointment with her doctor, there was no answer.
There was an app for remote doctor consultations, and she loaded it and signed up.
And she waved the camera over the rash and sent still pictures, too.
The result.
“Go to a clinic,” said the doctor, and her credit card was charged.
The clinic was closed, so she went to the emergency room.
She sat in the waiting room for hours.
And caught coronavirus and died.