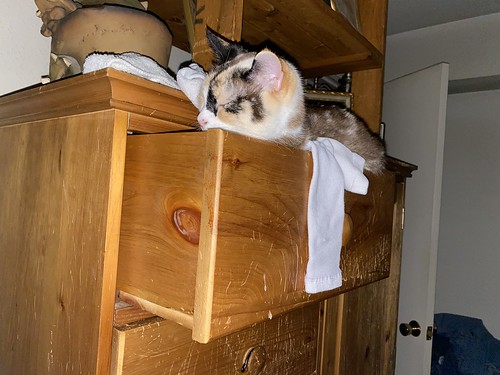 The impressive statue filled the room of the museum. It held an ax and a noose, and also a plate of fruit.
Strange combination, he thought.
“Whatever you do, don’t touch it,” said the security guard, walking away.
He touched the plate, of course. Nothing happened. The noose. Nothing. The ax. Still nothing.
He shrugged.
Suddenly, something hit him. He got snatched back by the neck and was gone when his back got slashed.
Before the cameras, the director promised he would find the culprits.
The security guard hid the noose and the ax away, and calmly enjoyed his apple.

I like ambiguous words. You know the sort: when you can use the same word to mean completely opposite things, like the word ‘fast’…

When our marriage commenced, our relationship was rock solid, and we felt it would hold fast forever, but now we’re fast approaching the end.

The wife tells me, that no matter what, we’re bound by our vows, and therein lies my getout clause.

That way, I have a contractual obligation to divorce her.

It’s one of my favourite words – cleave.

Unlike stab, chop, cut, carve and slice it conveys a real sense of intent – a premise of permanency, of finality and complete conviction.

You can’t cleave something half-heartedly and there’s an element of surgical precision too: Cleaving is undertaken with gravitas and commitment, it’s not haphazard, incidental or impulsive.

And, for all those reasons, cleaving is far too good for you.

For you, my friend, it’s the choppy, stabby, slashy, frantic cut and thrust of frenzied abandonment. The messy kind that causes pain and intense suffering.

I’ll save the cleaver for someone better.

Cleave
———
Three eminent masters of their respective crafts contended to see which was the greatest.

Master Ding the butcher said, “My blows with the cleaver are so sure, that in nineteen years not once have I needed to resharpen it”

Master Qing the carpenter said, “In nineteen years, I have never needed more than a single blow to drive home a nail.”

Master Bing the bureaucrat said, “In nineteen years, I have denied every petition presented to me.”

The other two bowed. The next day, Master Bing’s body was found expertly dismembered, the pieces nailed to the gateposts of his house.

When his mother left, Billbert walked over to his father and looked at the computer screen. “Who exactly is headed our way?”
His father pointed to three blobs on the monitor. “These are super villains. I don’t know who these two are, but this big red one is named Atomic Fission.”
Linoliamanda joined Billbert and his father. “What are his superpowers?”
“Her, superpowers,” Mr. Wienerheimer said. “She divides things, like separating the members of our team. Making it possible to eliminate them one by one.”
Billbert gulped. “Is mom in danger?”
His father shrugged. “I don’t know. I hope not.”

“Mama?” “What Cleave?” “Why did you name me Cleave? Timmy says it’s a stupid name.” “Timmy is a dick, and everyone in this direct DNA pool is a sub-primate.” “No, mama, I know Timmy is a knuckle dragging moron. I need to weaponize my name to battle with the god’s less fortunate, thus seeking the almighty’s reward. Well actually I just want to fuck will them.” “Well it happened a long time ago in Italy. Your Great Grandfather, not one to suffer idiots, buried a butcher’s knife it a customer’s head. Go now my little cleaver, and do likewise. Chop-chop.”

The annual Best Cleavage Contest was coming up.
Melanie picked out her best low-cut blouse and bra and checked herself in the mirror.
“All natural, no artificial fillers,” she told herself.
Unlike some of the so-called competition.
It took thousands of dollars of surgery to get close to Melanie’s league.
There was no way they’d make top shelf.
So, they took a different approach.
Up there on the stage, Melanie looked up and down the row of flat-chested women.
Who pulled off their skirts and turned around.
Perfect ass-cleavage, every one of them.
Defeated, Melanie felt like a total… fool.