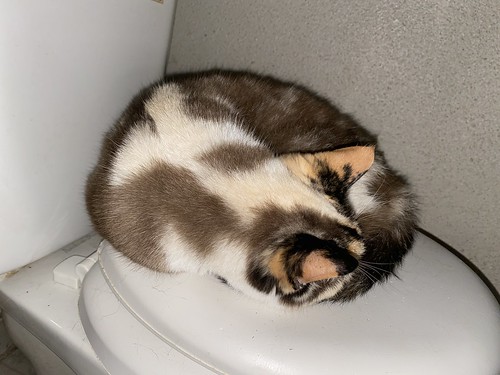 Billbert couldn’t help himself and left the safety of the heights, flying down to get a closer look at the destroyed building, to see if his mother was safe. As they approached the parking lot, Nuclear Fission turned, looked up at them, and sent a wave of energy, blasting them apart.
Linoleamanda plummeted to the ground.
Billbert shot to her, catching her just before they both hit the ground, tumbling across the tarmac.
Linoleamanda sat up, rubbing her forehead. She looked at her hand, slick and red.
She smiled. “Who’s blood is that?” she asked and collapsed onto her back.

Don’t Piss Off the House Mum

“Who’s blood is that?” Asked Mary Ann. The crew looked sheepishly at one another, not a sound. “How many time do have to tell you guys. Drain the glass before starting a new one. Look there’s dozen of half-filled glasses. It not like blood grows on trees.” Tim pointed at the window. A new crop human-cycles were turning slows in the wind. “Not funny.” Return Mary Ann driving a six inch piece of hickory into the soon to be dust pile of Timmy. Many hand grabbed many glasses. “That’s better. Good to the last drop” Mary Ann left the room.

“That was my familiar!” she screeched. “It was a perfect black cat, bred especially for me!”

“Don’t worry, it’s fine, I just drew a sample,” I said. “A test run, see? For the next step I’ll get a stray from the cat shelter. They have stronger spirits than your over-bred delicate pets, anyway.”

I did not tell her that when I had perfected the ritual, she would be the sacrifice for the final summoning.

The orderly arrived at the nurses’ station somewhat out of breath.

“This was urgently requested, he gasped, holding out a full plastic bag, “whose blood is this?”

“I’ll take that”, I said, taking the packet from him and signing his docket, “thanks”.

“Someone must be pretty sick to need it so urgently”, he continued.

I checked my watch, “It’s my break time, girls – I’ll be back later” I called over my shoulder, heading for the kitchen.

Once there, I slit open the bag, filled a glass and took a long drink.

“Who’s blood is that?”
He tilted his head, wriggling his nose. Strange card.
The monthly dinner party was a scrumptious meal seasoned with intelligent conversation.
Who’d written this? Certainly not the host. Mrs. Bates would never make such a blatant mistak…
“Wait…”
He folded the card. “Who’s that?” Makes sense. These dinners were always slightly mysterious.
He folded it again. “Who’s blood?” Ummm…
How about “Blood that?” Too much folding.
He set the card aside and dinner proceeded as usual.
At midnight, the letters on all cards turned red.
He was the only survivor. Apparently, folded evilness doesn’t work properly!

I could sense trouble as I walked in the door.

“Whose blood is that?” She demanded, grabbing my collar, twisting it viciously to show me the tell-tale mark.

“No sweetheart, it’s not what you think! That’s not blood, it’s erm… lipstick!”

“Don’t you sweetheart me, you low life! You’ve been hanging out with your Mafia buddies again, and now you’re lying to my face about it!”

She slapped me hard, before storming off, slamming the door behind her.

Breathing a sigh of relief, I rubbed at the lipstick stain, thankful that my affair – for now, at least – was still undiscovered!

An old farmhouse, a hidden room under the basement … chains, shackles, a cage. Blood everywhere. A place of torture, pain, rape, and death. 12 years with the FBI … Janet had seen this before …

Above the workbench strung on wire as mementos … small ears … children’s ears … Maybe 150 or so.

Who were these kids? Their fear … how they died … all for their adrenaline filled blood!?!?

Janet swore … “Somehow, someone would pay for this!”

Well, we found blood on the scene, but it wasn’t the victim’s.
None of it was, despite the victim having been shot six times.
The lab ran it through all their tests, and they handed back some sheet music.
“It’s for the piano,” they said. “Not the oboe.”
As if we’d use an oboe. The boys in Burglary use oboe, not us.
Thing is, none of us play piano, so we hired a session guy.
A nice, jaunty boogie-woogie tune.
We all had a good time of it, paid off the piano player, filed the paperwork, and closed the case.