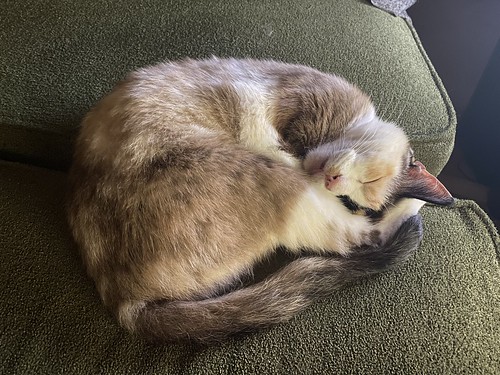 Heal. The pain. Some pain. No… The darkness will stay for as long as I live, he thought. Fight for money, fight for food. Fight. Be nothing but a smashed up face everyone will have forgotten by tomorrow. Move on to the next town. Fight some more. The posters plastered all over. The money. The food. And onward he went. Town after town. They all looked alike. Until that day. Her kid, her dog, her smile. It’s complicated, she said. He didn’t think it was. It was actually quite simple. Heal. The pain. All of it. Just heal. And smile.

My parents used to tell me to be true to myself, no matter what others think. A philosophy that they followed themselves.

We lived in a rough and uncompromising district, which made it tough for dad to indulge his passions for flower arranging and needlepoint, but he stayed true to himself, and oddly, the roughnecks in the neighbourhood gave him a wide berth.

I admired dad for sticking to his guns and to me it proved that even the toughest opposition will always respect integrity.

Although, on reflection, my mother’s reputation as a champion heavyweight boxer may have helped too.

Nearly half a century ago I had the best joke a 20-something could have. When folk were making 3.50 I was pulling down 15.00 an hour. I worked in a natural food bakery packaging pastries: I was a boxer. We got paying 2 Cents a cookie. I could grab 20 cookies in a hand with one swing across a cookie parchment. The trick you learn when on piecework is never, I mean never tough a piece of paperwork. Anything remotely administrative is on a separate clock. When management push back we said ok put us back on the clock. Crickets.

You’re not really a proper serial killer until the press have seen fit to grant you a headline grabbing name.

But it’s hard to gain true notoriety anymore, because so many names, I’m sorry to say, are rather predictable.

It’s usually just a case of your location appended to your methodology… Like the Boston Strangler, Yorkshire Ripper and so on.

If I’d known I’d become famous, I’d have reconsidered my own methods.

The ‘Pondhaven Boxer’ is a crappy name.

It’s not because I punch my victims though.

It’s because I box up their remains and send them to the cops.

A large man with a short black beard charged into the emergency room, and shouted, “Where’s Olive Oil?”
The squinky eyed sailor jumped up and bounced in place, his fists held up like a boxer.
A nurse appeard through double doors. “Linoliamanda?”
Her father escorted her to the nurse. He said to Billbert, “Don’t go anywhere. I’m not done with you, yet.”
As they dissappeared from view, two men in suits and dark glasses walked into the room and scanned the occupants. When their eyes fell on Billbert, they approached.
Without introduction they said, “Get up. You’re coming with us.”

George was never gonna be the champ, but, he was a damn good boxer. Iron chin, decent uppercut, stiff jab, 4 or 5 combinations he could work righty or lefty.

George had a gimmick. A natural lefty, trained as a righty … A couple times a round George switched up …

Righty to lefty …
Lefty to righty …

Not just punching … footwork too!

While his opponent adjusted George had a tremendous advantage. He pounded them!

Beat them to a pulp!

I loved playing Mike Tyson Punchout.
You’d progress through increasingly tougher and quirkier boxers until you ended up fighting Mike Tyson.
All it took was one punch and he’d knock your ass down.
And he’d knock your ass down a lot.
When I say you, I mean a scrappy little boxer, not Robin Givens.
Who’s she?
Mike Tyson knocked her ass down a lot, too.
I don’t play that many games anymore.
Arthritis. Bad stuff.
I do watch videos of gameplay on YouTube.
Let them pay for the game and put in the hours.
And I’ll ignore the commercial breaks.