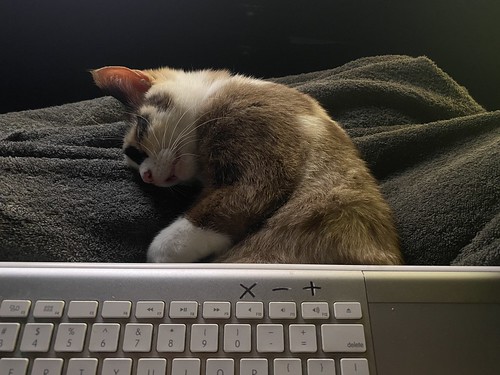 Take my advice, and never marry a sex kitten.

Don’t get me wrong, it’s a blast at first – the admiring glances and barely disguised jealousy of other men who can only dream of having what you do; the ill-concealed bitchiness of other women who wish they had her looks and style.

It’s great, but living with a sex kitten isn’t quite what it’s cracked up to be.

Frankly, the novelty of emptying her litter tray ever day has waned; and you never get used to seeing her hawking up a hairball on the carpet.

I dream of you in colors that don’t exist. In sounds that are as silent as a forest full of life.
I dream of you sitting next to me, cloaked in shiny certainty, wrapped in playful energy.
I dream of you being you and jumping and running.
I whisper a thousand moments of you.
I whisper and smile, desperately trying to keep you here.
I breathe the past to escape the now. But you’re not here anymore.
And you’ll never be here again. Never again.
I have to let you go, don’t I?
I just have to let you go.

I love my little kitten, he’s so cute and playful, a lovable ball of fluff and mischief.

I can’t imagine what I’d do without him and his mad antics.

And there’s you thinking I’m a horrible person, with no heart or feelings; no conscience or morals.

Just goes to show how wrong you can be.

It’s true that I’ve tortured, murdered and desecrated family, friends and strangers alike, but I’m not all bad. My lovely kitten means the world to me.

Best of all, there’s nothing better than a cute little kitten to lure unsuspecting children to a horrible end!

Murray’s mama was a lap Kitty. Fluffy, well groomed, and sweet! One night she slipped out the back door and found passion in the back alley.

… Murray was cut from different cloth.

Fierce, violent, aggressive …
back alley wild …
the way of the fang in claw!!!

Beast of the streets …
Baptized in blood …
Ferocity, savagery … coursed through his veins!

And yet, when the girl child gave him milk, scratched his neck … Murray would purr and purr

But … he lapped up the milk … and purred.

The kitten was not cute nor particularly pretty. It looks like an assembly of damp pipe cleaners. It was alone, scared and hungry. She or he had been dump at the end of the street and had made it to the safety of the back deck. We play a game of hide and seek, because if the kitten see me it will duck under the deck. I can’t just leave out cat food. The deer, raccoons, chicken, and woodpeckers would eat it first. So we play hide and seek at dawn and dusk. Sometimes the kitten wins, sometimes the deers.

When Billbert didn’t respond, the two sunglass wearing agents moved a step closer.
“Come on, boy. Let’s go,” one of them said.
Before he could get up, Dergle Vander Hoont stepped in front of him and said, “He doesn’t have to go anywhere with you.”
One of the agents sneered. “Take your emotional support cat and get out of the way.”
Dergle was clearly offended. “This is no paltry kitten. This is the source of my super powers. The powers of the wiener dog.”
“Yeah, Right.” The man laughed. “More like you have the powers of the Christmas Fruit Cake.”

BEWARE OF KITTY says the sign on the fence.
But I don’t own a cat.
I own a Rottweiler. And I named him KITTY.
All capital letters, too.
Because I shout KITTY a lot.
After words like SIT and STAY and KILL.
KITTY is usually well-behaved.
I stress the usually.
The postman started to carry mace, so I made goggles for KITTY to wear.
Then, the postman started to carry a gun, so I made KITTY a Kevlar vest.
I have a box at the Post Office now.
And never get coupons or political shit hung from my doorknob anymore.