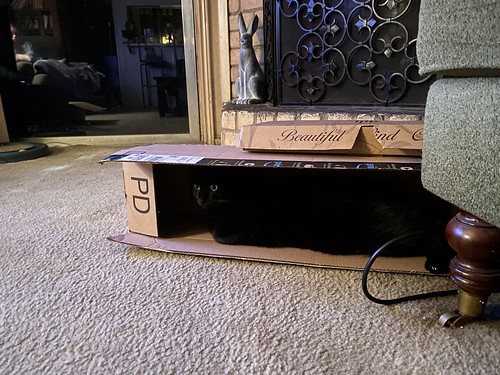 Grasp a line of thought. Or try to.
And those animal heads mounted on the wall. The moody embalmed fish that was supposed to look alive and looked even deader. All conspiring to kill.
The door swung open and there it was. They dumped it on the table.
To work.
The chainsaw slashed through the skin, the meat, the bones. Cracking sounds signing the final surrender.
A leg, another leg. An arm, another arm.
The head… Oh, the head… That grimace of anger.
Good thing they didn’t have to mount her head on the wall. The fish wouldn’t like it.

I’ve never owned a chainsaw, never wanted one and have no idea what I’d do with one anyway.

It’s not exactly an essential accessory for the man about town in an urban environment; chainsaws aren’t really necessary for unclogging the photocopier or for hosting Zoom meetings.

I don’t possess any checked shirts, or have any giant redwoods requiring felling, and I just know that putting me in charge of a chainsaw is about as sensible as giving a baby a loaded Kalashnikov.

Even so, being a guy, I feel I really should own a chainsaw.

Those chainsaw massacre slasher movies really wind me up. Clearly created by idiots with no practical experience of serial killing, carving up bodies, or for that matter, owning a chainsaw.

To begin with, chainsaws are messy. Yes, a bloodbath sounds fun, but in practical terms it’s a nightmare when it comes to cleaning up.

Then there’s chainsaw maintenance – cleaning and oiling the chain and guide, constant re-fueling, and the tedious business of sharpening chain teeth: Bone blunts them dreadfully.

It’s a lot of hassle, time and energy, when an axe will do the job just as well.

I’ve lived a Forest Grump life. I’ve meet a mess of folk early in their careers. Robin Williams, Penn and Teller, Donald Rumsfeld, Rodger Stone, the girl who sang on Paradise By the Dashboard Light and the band Styx. Hands down the odd guys were the Flying Karamazov Brothers. I was living in Santa Cruz and I would go watch them practice moves in the park near the bakery during lunch breaks. They had this funny bit juggling running chainsaws. While cross tossing eight saws they did this patter. “You rip a these, you mend a these.” Damn they were good.

Billbert’s mother hurried to take him in her arms.
A man followed her, still covered in the dust from the collapsed headquarters. He laughed at the two agents with a ratcheting growl that sounded more like a chainsaw. He asked, “What’re you federal boys doing here?”
“Why we’re here, is federal business and we’re not ready to share that with the likes of you people. What we’re here for, is to take this boy for questioning.”
Billbert’s mother stepped in front of her son. “If you’re going to take this boy for questioning, you’ll have to go through me, first.”

Chainsaw
———
The kid pushed through the saloon doors and stared wildly around. The old men stared back.

At last, one broke the silence. “You lost, boy?”

“This is the Last Chance Saloon, right?” said the kid.

The kid said nothing.

“If it’s advice you’re looking for, I got some right here.” He leaned toward the kid and leered. “Don’t cut your genitals off with a chainsaw.”

“Hey, that’s some pretty good advice you got there, boy!” wheezed another old-timer.

The kid bolted outside.

It was exactly three in the afternoon.

It’s one thing to have a cord of wood, and another to make it suitable for the stove or fireplace. Pickup truck, chainsaw, log splitter … Mike had a good gig going. Splitting logs and stacking wood all over the county, cash only, all word of mouth recommendation.

People were always getting Rabbi Chaim Esau’s name wrong.
Instead of taking offense, the good rabbi embraced it.
“I am Rabbi Chainsaw,” he says from the dais, firing up a gas-powered McCulloch and waving it in the air. “Who wants a circumcision?”
The congregation would laugh, and he’d get right into the sermon.
He performed this opening gag for forty years.
And then, one Saturday, as he hauled the growling chainsaw into the air, he suffered a rupture.
The blade fell through his head like a knife through butter.
They made sure to get his name right on the headstone.