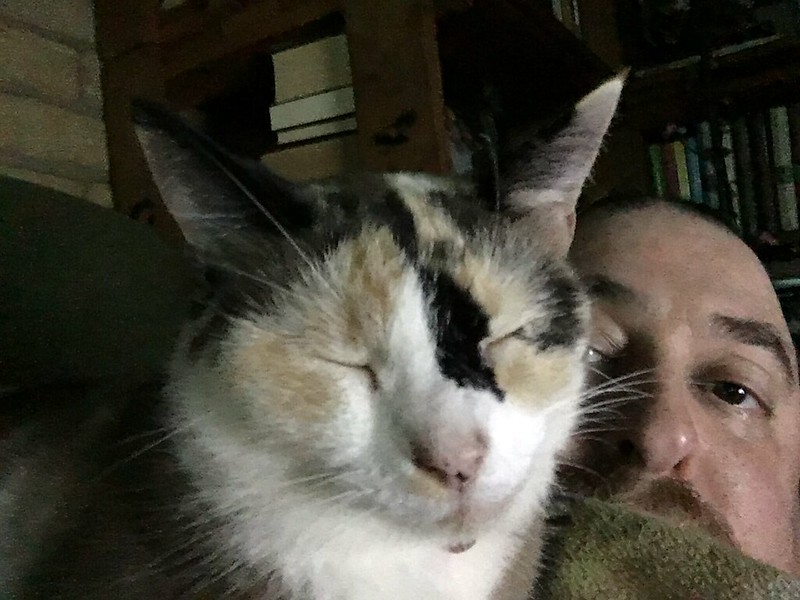 Not quite Bonnie and Clyde

“Earthling Wine is swill,” grumbled the little green man. “Shut your air hole,” returned the big purple woman, “your Frackn idea to crash on this Gor forsaken rock.” “Because you didn’t filler up at the Alpha Centauri Zmart.” “Right, right it’s my fault you second rate amphibian.” “Look child of a tree sloth, I’m just laying out the facts.” “Ok Almond eyes, Fact one who pocketed the Eye of All Seeing Sight during the Emperor’s coronation?” “No, Zero fact who made off with the Generals ID plate?” “Initiative.” “Oh really?” “Fur ball” “Pond scum “Shut up pass me the Thunderbird.”

The End of the World
By Christopher Munroe

They say that, from a certain point of view, every end is a new beginning.

I assume this is intended for people who’ve been dumped, as it does NOT apply to the end of the world.

It came from beyond the clouds, a being beyond any earthling’s comprehension, and we knew instinctively there was no way to defend ourselves, no hope for humanity…

Well, we who weren’t driven mad did, anyway.

Myself, I tried to be philosophical about it.

I drank up the wine, eyes on the horizon, and waited for the end…

I was certain that the cloud passing over was a sign and a threat to all the earthlings that dumped their garbage in the ocean and built atomic missiles. It was the beginning. That day, that hour–that the aliens finally put their hooves down and let us know that they were here, that they were taking over for our own good and theirs, and that we had fugged things up so much they decided we needed a lot of radical changes to save ourselves and save them, in turn. They were out to prove that we were irresponsible poopheads.

#2
I dumped two bottles of wine in my schlep bag and went to the apartment where the writing group met. I had planned to blow smoke up the behind of the editor of our local weekly. Hoping he was going to be there, I wore my best blazer and my favorite tie. I wanted to get a reporter job where I could write to my strengths. I had written two or three hundred short stories, published on line, but they offered no challenge to my real talent, and didn’t give me any satisfaction. I was on automatic when I wrote.

“Isn’t this a great day for a picnic?” Dad exclaimed, his manufactured enthusiasm only delaying the inevitable responses.

“I was going to hang with Dylan,” said my sister Jan.

“Sit on damp grass, attract ants, and have lousy cell reception? No, thanks,” I said.

“It’s a lovely idea, dear, but the day is turning cloudy. We don’t want to risk rain dumping on us,” Mom said.

“Then it’s settled: we leave in an hour.” Dad spoke to me only, as Jan was already on the phone to Dylan, explaining that she had the worst father in the world. Mom was putting a bottle of wine in the cooler. She felt the outdoors was best experienced with a serious buzz. I sighed and checked the charge on my Game Boy.

Prices at CVS are terrible, so I never go without a sheaf of coupons. Just as certain as bad prices, I can always count on being unable to use one or more coupons. I’ve had the self-checkout machine eat several, had some the system simply refused to take, and had others good on merchandise that the chain doesn’t carry. My favorite is the “25% off your purchase” coupon. The fine print explains that the coupon is not good on sale items. This turns out to include “buy one, get one half off” items, even if I’m buying only one. “But I’m paying full price!” I protested, to no avail. I dumped the merchandise on the counter and left, feeling the beginnings of a tension headache.

#1 – The Gospel According to Norman: In The Beginning

In the beginning was the heaven and the earth, but both were incredibly boring, so – to liven things up a bit – god said “Let there be wine”… And there was wine.

Much partying and merriment ensued and the heavenly host grew rather the worse for wear, and more than a little drunk.

Seeing his creator distracted, man had a party of his own, sinning both originally and copiously. It didn’t matter: An angel drunkenly left a tap running, flooding the earth.

Fortunately, a few righteous individuals were spared – some boat builders who didn’t have time for partying.

Space is becoming messy. We’ve dumped so much trash out there, circling in geosynchronous orbit, most of the stars you see at night are just reflections of sunlight on stray bits of metal and dust.

Dead satellites, lost spanners, fragments of foil, bags full of astronaut poop: A massive cloud of debris that’s not going away, and nobody knows just how damaging if might be.

Not that it matters to me – by the time it’s anything to be concerned about I’ll be long gone.

Unless of course, I’m taken before my time… An unfortunate victim of falling space junk

I’d always denied the existence of aliens, but faced with the thin, grey creature, with the dark oval eyes, I was finding that was difficult to do right now.

I giggled nervously; “You’re not going to ask me to phone home or take you to my leader are you?”

The alien looked at me steadily: “You are to stand trial before the Galactic Court of Justice as your planet’s representative. Humans are beginning to become a cosmic pain in the butt!”

For me, the beginning was when I joined the school newspaper. I was enamored by my uncle, the foreign correspondent. An advisor yelling at us for being late on deadlines, doing lay out under light boards, hauling ass in my friend’s old MG to make it to the printer’s by midnight. I was certain it would be the rest of my life.

And I tried, taking pay cuts from $11/hour to $10.50, losing years to a hyper-local startup, reporting on big pharma.

Luckily I’m the one who got to begin again, but I’m certain it’ll never be the same.

“Would you like another glass?”, I asked, offering the wine bottle.

He smiled and nodded – they always did – and then, shortly afterwards, the look of surprise as they found themselves slipping into unconsciousness and slumping onto the table.

I’d perfected my technique after some idiot tried to date rape me using the same method – he hadn’t succeeded, and now I was on a mission – it was simple revenge against the arrogance of the male of the species.

When he finally woke up, he’d find himself dumped in an alley, missing his wallet…

And missing his testicles!

“Look, this wine costs a fortune,” said the sommelier, tilting the bottle.
At the beginning, the teen students seemed interested and nodded.
“If I dropped it… What a catastrophe!”
Then some started yawning.
“It must taste heavenly!”
Several strayed away.
However, the sommelier was quite proud of his presentation and he didn’t see it coming.
One unsuspected elbow and the bottle slipped from his hand, crashing on the floor.
All laughed uncontrollably.
The sommelier died inside… He dashed onto a shelf, smashing a fortune and his future.
The kids just gazed back at their phones and forgot all about it.

Cloud; beginning
———
Find a little fluffy cloud, and stare at it patiently. After a few minutes you may begin to not merely notice that it has changed shape, but to directly see it writhing in the sky. The transition from “seeing that” to “seeing” is unmistakeable.

Practice this whenever you see clouds.

When you can look at the sky and at once see a roiling cloudscape, you can try staring at the surface of a lake until you see the minute disturbances telling the movement of fish below.

Eventually, you will be able to see grass grow, paint dry, and friends age.

“Wait here,” Mickey told Cherry Cola, taking furry brown monkey shorts from his backpack.
Just because you’re a monkey doesn’t mean certain parts just disappear. In the beginning, when he first changed, it came as an embarrassing surprise.
In a storage room, he dumped his clothes in an empty wine crate and left the room as a large howler monkey.
“Oo, oo,” he said to Cherry, motioning her to follow.
Outside, he leapt to a fire escape and swung to the roof. He wouldn’t be among the clouds, but he’d be above the gravity bound earthlings on the street below.

I had to go to the planet because almost everyone seems to be playing this new game called Poke a Mango. Since Mango is in the name of the game I am almost certain that the earthling Matthew Sandborn Smith is somehow mixed up in it. I met some friendly people who shared a mobile device and much wine. I liked the sweet taste but after involuntarily dumping my stomach I began to think this drink is only for humans. I think it was the reason my head was in a cloud and I didn’t catch any Poke a Mans.

Long ago, Manfred Mann’s band sang about The Mighty Quinn, an Eskimo so spread peace and love and joy.
Ever since then, I’ve always thought that song must be hell for any Eskimo or person named Quinn.
“Are you an Eskimo?” people would ask Quinn.
“Are you named Quinn?” people would ask the Eskimo.
Although, now that I think of it, I don’t believe that I’ve met many Eskimos.
I can’t recall the last time I saw one.
I assume that they heard the song, got sick of people asking them if their name is Quinn, and went back home.