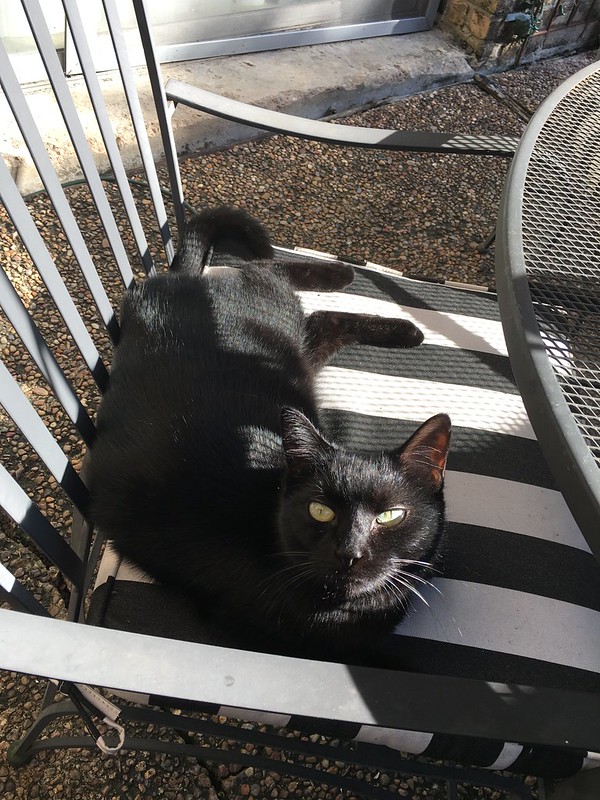 The Darkness
By Christopher Munroe

Whatever you do, in this life, the Darkness will always be there, waiting for you. Always.

The band, I mean.

I’m not in any manner of existential crisis at the moment, and while I do live with mild depression I’m in a fairly stable emotional headspace as I write this. I’m just listening to a lot of The Darkness, lately, because I’ve been in a throwback ‘80s metal kind of mood.

So yes, whatever you do, The Darkness will be there, waiting for you.

Because they believe in a thing called love.

Just listen to the rhythm of their hearts….

Brought to You by Allstate
by Jeffrey Fischer

For a while, I drove home with the sun directly in my eyes. My fault for living west of the Metro station, I know. But I got used to it, and slowly the sun dipped a little lower, a few minutes each day. Finally, I could see again, and so could the crazy home-bound drivers surrounding me.

Then the insane invention known as Daylight Savings Time ended in early November, and, as I left the Metro car that first Monday evening, it was pitch-dark outside. It turns out everyone thinks he can drive well in the dark but no one actually can.

And, in the morning, driving east, the sun is directly in my eyes. Who invented this concept? The insurance industry?

It was a dark and stormy night… The wind rattled the window panes, and the rain hammered against the glass.

Irritably, the writer tore the paper from his typewriter, throwing it onto the growing pile on the floor.

It was shocking that after all these years, the best he could manage was clichéd ramblings and stock prose. He may as well be writing greetings cards, not novels!

In a sudden burst of rage, he kicked out at the pile of wastepaper, scattering sheets everywhere in a flurry of crumpled pages, before storming off to bed.

It was a dark and stormy night, and strange things were afoot in the writer’s study.

Fluttering papers shifted in unexplained motion, discarded pages moving, as if captured in eddies and gusts, and unseen whispers of wind.

As night marched onwards, the pages fluttered and floated upwards, gravitating towards the writer’s bedroom, to hover above his face.

Imperceptibly at first, then with gathering momentum, ink ran from the paper in thick, dark, drops. Trickling over his face, seeking out his eyes, his mouth, oozing into his ears and nose.

The writer awoke, screaming, as the first light of dawn broke!

The writer sat in the morning sunlight – the dark thoughts of last night, just a faded memory.

Feeling strangely inspired, he began typing – fingers moving of their own volition, as words and ideas poured unbidden onto the pages.

All day, he continued until finally, it was finished. Quite the easiest novel he’d ever written!

Retiring to his bed, he congratulated himself on a job well done.

In the darkness, the words seethed… Who did he think he was taking credit for their work?

Silently, slowly, the dark ink ran, and the pages returned to their pristine blank state.

He was short, dark, and butt-ugly. His mother had eaten too much candy containing Aspartame when she carried him.

As a mature man, he didn’t spend much on his wardrobe, as he felt it wouldn’t make a lick of difference in the acceptance he would get in the community. He also saved a lot on housing, prophylactics, automobiles, theater tickets, and restaurant dining.

Lenny did invest his money in entrepreneurship, and made a fortune by opening unique and popular businesses in his area.

Soon, as his bank account grew, many realized Lenny’s idiosyncratic looks worthy of attention and their friendship.

“Study hard, or you won’t get a good job,” threatened his teachers.

“Behave, or you won’t get any Xmas presents,” nagged his mother.

But Sambo didn’t care about an ordinary job. He couldn’t give tuppence about pleasing Santa, Nick, or Father Christmas. Sinterklaas was the one that he aimed to impress.

His plan worked beautifully. Sambo was kidnapped on Christmas Eve, never to be seen again. Now he lives in Northern Scandinavia, works one day a year, and lives it up from January to November with the other naughty boys. With their darkened skin, their own mothers wouldn’t recognize them.

Passports, check. Boarding time, check. “Here we go!” Flying wasn’t always an easy endeavor but the enthusiasm was big. A small group united in their will to win, as they had so many times in a recent past. They kept their eyes on their future, as they should. Then, a horrifying twist of fate put an end to everything. It put an end to lives… Children lost their fathers, wives lost their husbands. Mothers and fathers, families, friends, had to mourn their loved ones. It was raining. The pages of the passport fluttered in the strong wind amongst the wreckage.

A darkness that swept us up, followed by almost an upturning although none of us ever fell.

A shake rocked our world.

Frozen in time the snow flurried round us, drifted, stopped the traffic although even the elders could never remember it moving.

Almost as soon as it began the quaking stopped. As if we were on solid ground again. A stability as the snow swirled down rebounding against a solid sky.

Rested over our scene.

And calm was restored.

Jack Dark was a most interesting man. A vast intellect and soul of unparalleled depth. The council to the powerful and rich, but at the same time an advocate for those with little or no voice. No less of a man who knew well his short comings and failings. Kept his darker demons at bay and let the angels of better his nature wheeled the flame sword of justice. Quick in action, slow to anger. In a time of darkness he shown like a black light and all who following in his shadow found their way thru this endless night.

Dark is not the absence of light; it is the absence of usable light. If you are in a tunnel underground, your eyes will find a tiny candle adequate. But someone standing between you and the Sunwill be Dark, invisible to your vision.

In our Dark house all the lighting is wrong. You cannot see your face in a mirror if the light comes from behind. Worse, lights above a mirror, rather than at the sides, shine down and make dark shadows on your face. The place you cannot see to knot your tie is the definition of Dark.

Don’t be afraid of the dark… There’s nothing lurking in the shadows to be fearful about. Neither are there monsters hiding under the bed, waiting to grab your leg as you vault the gap between floor and blanket.

These are all illusions: Creations of an overactive mind, and deprived senses.

They’re not real, and they certainly cannot harm you.

Old Nietzsche had it right – the true darkness lies in the mind; and if you do gaze into that abyss, it will gaze right back at you…

Now, look into my eyes…

And see what really lurks in the dark!

Dark
———
I got up from my desk and answered the doorbell. “Come in, Janet,” I said. I turned on the hallway light, it being a gloomy midwinter afternoon.

Janet, my research student, had spent the last month visiting European libraries and archives to examine some original documents from the Middle Ages, many never translated.

We discussed what she had found, and she left me a copy of her digital transcriptions and audio notes. It was well into the evening before I saw her out.

I closed the door and turned out the light. For it is always light, where I am.

Though it was dark, simple deduction told them that the five cars ahead of them blocked the highway completely, and they weren’t getting past in that direction.
“Can we turn around and go back?” Ferret asked Mickey without taking her eyes from the blockade.
In answer, the four by four appeared over the rise behind them.
Ferret waited until the the truck bore down on them and then gunned the minivan, spinning a doughnut in the median between lanes of the highway. Less maneuverable than the van, the truck had to jam on the breaks to try to follow them.

Dr. Odd found abortion to be morally repugnant, so he invented a new form of birth control.
He called it The Dark. It moved the fetus to the dark space between space and time, an endless timeless nothing.
It was perfectly safe for the mother and the fetus. And it was completely reversible, where a fetus could be moved back from The Dark to the mother.
People asked him what happened if the fetus were never retrieved.
“Nothing,” he said. It simply doesn’t exist.
Unless he accidentally pulled it back out while trying to retrieve his Winter wardrobe from storage.