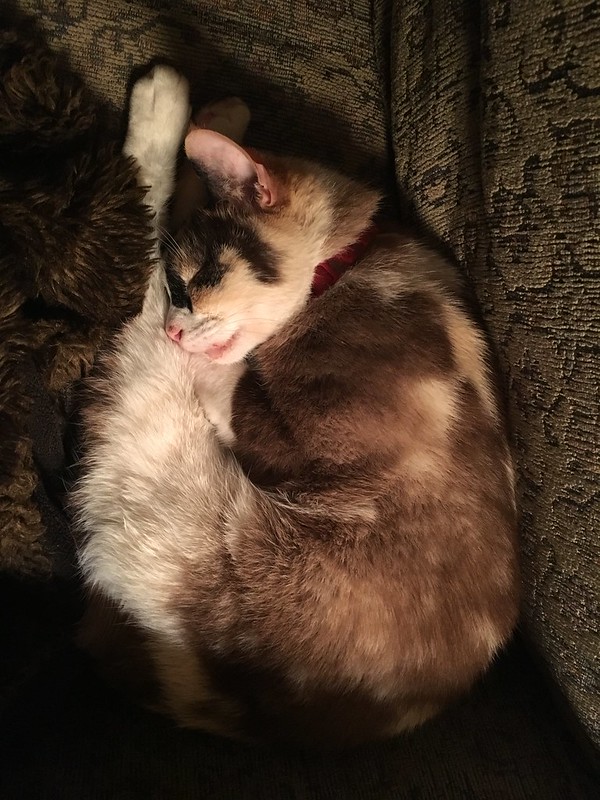 I forced my little sister into the tumble dryer after I caught her searching my laptop history and bookmarks. I secured the door with sheet metal screws and clicked on the switch.

Thirty minutes with the heat turned off should teach her not to fool with my favorite game machine.

Forty rotations a minute for thirty minutes is twelve hundred rotations. Twelve hundred bumps against the steel ribs inside the dryer would probably be enough to knock some sense into her and hammer a few concussive reminders into her skull.

My sister is forty years old and a crack addict.

I stared at the controls. My choices were “tumble dry,” “casuals,” and “cottons.” I stared at the load of wet laundry. Jeans, so that’s cottons, right? But the next handful of clothes were polyester shirts and women’s underwear. No cotton there, so maybe casuals? Can underwear be casual? Okay, surely tumble dry means something. I had the vision of one piece of clothing tumbling over another as the thing inside the machine rotates. Wait – isn’t that thing called a tumbler? So all the settings are really tumble dry, aren’t they?

I gave up. “Honey, it’s a nice day outside. Why don’t you hang the clothes on the line outside to dry?”

New Year’s Day: I woke up, on my sister’s couch, with a raging headache and covered in blood – my own blood.

I had no idea what led to my unfortunate condition, other than it was almost certainly due to the now empty Wild Turkey bottle that lay on the floor next to me.

Eventually the story came out – I’d taken a tumble on the concrete driveway, whilst nipping outside for some fresh air.

Just to rub it in, my brother in law had drawn a chalk outline around my prone body, before dragging me back inside to recover.

She Never Gave Up, A Mere Mortal Would Have.

Her name was Sally. None of that foofoo, hippy stuff, like River or Willow. A sensible name for a sensible woman. So it was that when her cat Max wove between her legs sending her tumbling to the floor though it had jarred the tiny dot of Sunshine LSD from her hand she had the presence of mind to track its parabolic position relative to the rapidly approaching rug. Save the face, or follow the drug? Sadly the equally orange sag carpet swallowed the orange dot. “NO YOU DON’T” she screamed. Six hours later it was hers again. Sensible Woman.

When she had asked him to join her he had been suspicious. Her invitations usually involved jibes at his record in the Senate: often about his staunch anti-environmentalist stance. His constituents back in the dome liked the quality of their air consistent! Her mercantile empire sold products that were so-called ‘Natural,’ which made money from their novelty and nothing more: mere gravy on top of the water sales.

Being outdoors gave him a headache, so took aspirin. His martini tasted wrong with the artificial juniper. Waiting for her, he stared out at the eggshell color of the dry polar clay.

The Long Tumble Down
By
Jon DeCles

“I think it started the long tumble down when they invented emojis. –No, it was long before that. They were already using hieroglyphs to represent words on computers and stereo units and, oh, all kinds of things. But once the tumble had started it could not be stopped, any more than you can stop an avalanche with a whisper. And they were not consistent! They made up symbols as readily as they misappropriated words, so meanings got tumbled together and things stopped meaning things. People began to get even worse at communication, less able to convey even the simplest things…”

They taught me to tumble as a child. One of my earliest memories is learning to forward roll, soon followed by somersaults and backflips.

Now I’m a coach for the Russian Olympic Squad, but times have changed. Competition has become ruthless and there’s no room for half measures.

When I was young, we’d force children into unnatural and painful positions, crippling their bodies to achieve gymnastic perfection, but there’s no time for that these days.
Instead, we take babies and surgically remove their connective tissue, replace bone with pliable plastic, and fix joints with titanium bolts.

All, with parental consent.

Time tumbled the walls of the old theater. Abandoned for years, it became refuge for all sorts of animals, including good old Ronald. Ronald found a secret room underneath the stage and decided to hide there. This time he didn’t run too far. The only problem was the kid. He always kept half the money Ronald gave him to get food, and he was a dangerous blabber. When the kid’s mom showed up and dragged Ronald by the ear to the local police station, the kid waved the little flag Ronald had placed on the wall of his secret room.

Poor Sumbal Trumble took a tumble while she fumbled with her jumbal
and stumbled over the dumbbell in the jumbled mess that was her room.
The cake crumbled all over the umbel scrumble she had just crocheted
and her lumbal was in pain as she bumbled around to get upright again.
Oh did her stomach rumble at the loss of her dessert, but Sumbal
mumbled for it to behave. Still she grumbled about the tumble but
being humble, Sumbal knew she had to just do it all over again. It was
only her fifth trip that day. What a drumble.

Juliet stumbled sideways, clutching her shoulder, and fell backwards out of site. Benny hoped she wouldn’t tumble down the stairwell.
But that wasn’t his biggest concern. Someone behind him had just shot his former partner. Was that intentional, or had they bumbled his assassination and hit Juliet instead? Wasting no more time, Benny tumbled to the floor and rolled sideways into a cubicle listening for sounds of his pursuer.
All was silent for several minutes and Benny thought his attacker must have left.
As he climbed to his feet, a man stepped into the doorway of the cubicle and smiled.

All Things Move Toward Their End
By Christopher Munroe

There will come a day when everything we’ve created tumbles to the ground, when the things we’d used to define ourselves are torn from us, leaving us naked and exposed before an uncaring, impassive universe…

It’s an unsustainable lifestyle, after all, built upon untenable foundations, and we knew when we began that none of it was meant to last.

And no talk of “Busses” and “Parties” changes that.

Yes, it will all collapse, and we’ll lose everything we value, some day, and some day soon.

So: Back on the bus, we have a party to get to…

Tumble
———
The sun would soon rise, and in the glim of the pre-dawn a group of about a dozen people were walking down a rocky path. Among them was a woman with a two-year-old toddling along the path beside her. As toddlers do, she toddled, and wobbled, and fell down, going all her length on the ground, then burst into tears. Her mother bent down and swept her up into her arms, bouncing her on her shoulder to calm her, and walked on.

Just an everyday incident, in a tribe of Homo erectus, a million years ago in the Olduvai gorge.

Jojo and Klaus were two German tumblers who toured the Old West with their strongman act.
Slim and muscular, the men went from town to town, challenging the strongest man in town to a fight.
Klaus would brain the challenger with an iron bar, while Jojo would finish off the sucker with a dagger to the heart.
Usually, the strongest man in town was a drug or a thug, and wouldn’t be missed.
So, the Germans wouldn’t be charged with a crime. Or, in some cases, they’d collect a reward.
Eventually, the two retired to a tree ranch in Oregon.