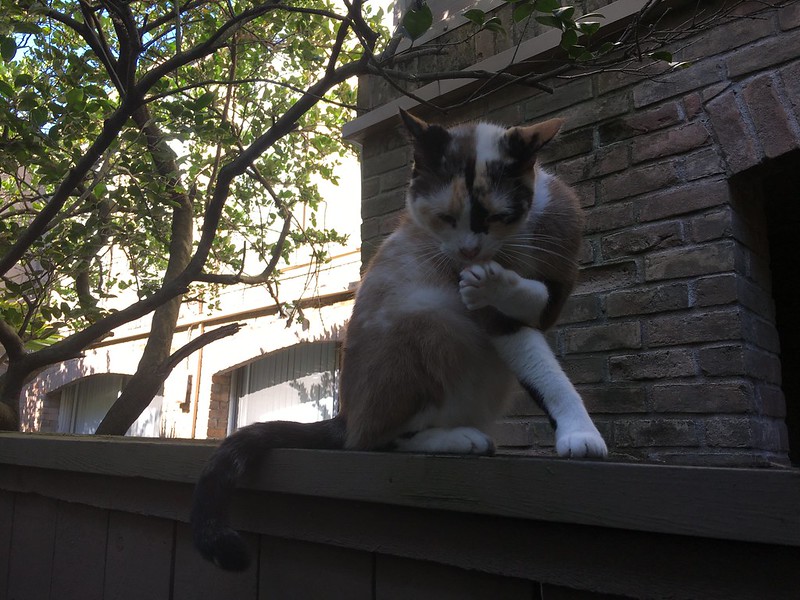 Betsy was an efficient secretary but had difficulty adapting to new technologies. Her responsibilities included taking dictation and transcribing the dictation for signature. She made few typos, and those were easily corrected with a dab of White-Out.

When the office removed Betsy’s beloved Smith-Corona and replaced it with a word processor, Betsy was confused but soldiered on. Dictation, typing, correction fluid. Turns out that scraping White-Out from a CRT was no easy matter. Management wanted to fire Betsy on the spot, but HR insisted they give her another chance.

One day the computers were gone, replaced by technology that imprinted words directly on one’s retina. Head gestures replaced keyboard commands. Betsy was ready with her dictation equipment and her trusty bottle of White-Out. She retired on disability pay when the doctors said the blindness was permanent.

As he drifted into the curb, his back wheels broke traction and he slid far to his right. He knew he had to correct and use the power to get out of the spot he was in.

He downshifted, and pushed his foot into the accelerator, hoping he could power out and still have control of the heavy sedan.

His Uber passenger in the back seat was screaming and trying to dial the office on her cell phone. She couldn’t dial, as her big ass was sliding back and forth across the leather seat.

Almo was fired the next day.

When I was a youngster, I had an errant tooth – rather than grow in the correct place, it decided it would be fun to erupt right in the middle of my palate, like some bizarre enamel stalactite.

Two hours of orthodontic surgical torture, and three years of braces and retainers later, and now I have a snaggletooth that they never quite managed to correct.

Personally, I could have done without all the drama and pain – just yank the damn thing out is my attitude.

Which is probably why my kids are always so terrified about visiting the dentist!

It depends who you ask – the Greeks, Lebanese, Italians and French all tell you something different. Ask an Aussie, and an Indonesian and they’ll have their own take, as do the Dutch and the Spanish.

Some will have nothing but a short, black espresso, whilst others think the perfect coffee requires copious squirts of flavoured syrups, a dash of Baileys, or beans that have travelled through the intestines of a rodent!

I have my own opinion, but I know one thing: No matter how you take it, Starbucks have got it wrong.

If Jimmy had been correct once, just once, life might have worked out for the poor little urchin. It wasn’t so much as a lack of brain power, he had considerable street smarts. It was that refined social etiquette that let you move effortlessly through the maze of class land mines. In the decades since The Thinning you were pretty much on two side of the tracks or the other. Those on the side with the goodies, life was pretty good. Those on Jimmy’s side had to keep an ever consistent eye on the baddies. Jimmy was bad for good.

“The correct answer is…

“No, wait, I’ve got it this time! The Thlacine! The Marsupial Wolf!”

“No, I’m afraid the correct answer is…”

“Wait now, this is really important. -The Smilodon! The Saber-Toothed Cat.”

“That’s not it either. The correct answer…”

“That is not it. The correct…”

“The Demetrodon! That’s the answer!”

“That is not the answer. The correct answer is…”

We’ll happily employ flogging, shackles, waterboarding, and what critics might consider more extreme forms of control – the fact is, we’re incredibly successful at what we do: Once a child has been through our processes, they’ll never return to old habits.

So, what sort of deviant behaviours earn a place on our programme?

Nail-biting, speaking with their mouth full, nose picking, staying up past bedtime… You get the idea. These are the type of bad behaviours that we guarantee to correct… No matter what it takes!

“Didn’t I tell you not to stand at the back of the room, staring at the ceiling? I find that extremely annoying, not to mention distracting. You cannot just stand there in silence. You haven’t said a word since the course started. Your attitude is totally unacceptable,” said the teacher, furious.
Without any sudden movements, the student pointed at the ceiling and everyone looked up.
A gigantic spider had built a massive spider web where huge flies were stuck and desperately fought for their lives.
“Correct me if I’m wrong, sir, but that’s quite the life lesson, wouldn’t you say?”

Benny peered up at the man standing in the doorway. His Roman nose and strong jaw gave him a regal appearance.
“King Lear,” Benny said. “It was you all along.”
“Correct,” the man said, holstering his pistol and looking toward the door to the stairwell.
Suddenly it all made sense. Benny said, “You weren’t after me. You wanted to draw Juliet out of hiding.”
“Correct, again,” Lear said, and headed for the stairwell. “Thanks for your help, Benny.”
A bullet between the shoulder blades knocked Lear to his knees.
“You’re still in love with her?” Lear gasped.
“Correct,” Benny said.

Hank always imagined being on a game show. He didn’t care which one;
he watched them all. When Hank finally had an opportunity to really
play, he proved his worth, answering questions correctly and amassing
quite a sum, but Hank had never anticipated the additional pressure
and anxiety. Upon winning, down fell balloons and the host approached
to shake his hand. The stress became too much. Before millions, Hank
heaved and vomited over the horrified host. Despite his brilliance and
wealth, Hank was forever going to be remembered for one thing, and
from that was born his nickname Hurling Hank.

Correct
———
A tax official was subjected to an inspection. Clerks examined his accounts, the records of those who had paid taxes, and the records in the capital of remittances received. They found that his assessments and collections were correct in every detail. Not the smallest copper coin or bushel of rice was out of place.

General Wei pronounced, “When a story is perfectly correct, it cannot be true. Perfection is not to be found in the Middle World. Therefore, let this tax collector be sent to attain the perfection of the heavens.”

The tax collector confessed his crimes before being executed.

Baron Otto Von Correct was the Grammarian of Bavaria, walking around and correcting other people’s grammar.
His staff would levy fines against serial offenders, who would complain to the local magistrate about the Baron’s behavior.
“There isn’t an actual Office of The Grammarian of Bavaria,” said the mayor, wadding up each ticket and throwing it in a wastebin.
The mayor ordered his men to round up the Baron’s men and lock them in the city jail.
The Baron himself was beaten to death and thrown into the river.
He had nothing to do with AutoCorrect.
I just don’t like Germans.