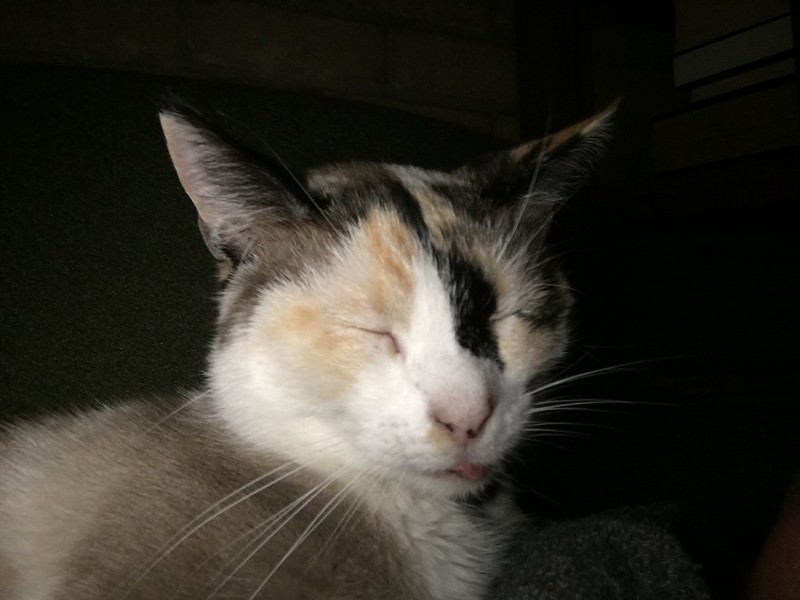 I eyed the can with suspicion. “Monster” the can read. “Energy drink.” That was my goal: I wanted to be a real monster, scaring the living daylights out of people and not be responsible for my actions. I popped the can open and chugged it down. And waited. I felt jittery, but nothing more. How disappointing. I swallowed the contents of a second can and felt dizzy. Too much caffeine for sure, but I felt no more monstrous than before.

I looked in the mirror: scales, a forked tongue, a barbed tail. Sure I looked good, I looked the part, but I really couldn’t muster any rage. I considered myself a failure to my family. The company was getting a nasty letter for its deceptive advertising.

A long time ago in a movie theater far, far away I sat with my friend to view the second Alien film. We laughed, “How much scarier could it be then the acid dripping, face grabbing, chest erupting original monster?” Well, so said the seasoned boomer movie goers. There’s a scene when the Badie has trapped Ripple and the little girl in a med lap …. released the infant Alien on wheel who scream around the floor. I’d like to say we calmly remained in our seats snickering, no we screamed and fully jumped off the floor into our seats.

Marcel was a monster. His idea of fun was to play practical jokes on everyone. His jokes were cruel and someone usually got hurt physically or emotionally.
Sometimes his jokes backfired, but never enough to discourage him from playing another joke on someone.

He would draw a full ounce of Super Glue into a syringe, and shoot it into someone’s car door lock or between the driver’s window and the rubber gasket so the mechanism would cease to open the window.

He was caught by a Samoan wrestler while vandalizing his Mercedes. An ounce of glue went up Marcel’s stern.

The monster that dwelled inside demanded sugar and electricity. Cold maple syrup drenched a frozen banana, eaten with a fork. This was embellished by hooking wires from the socket to clamps affixed to a metal tub with an inch of water in it. The monster insisted that he step into the tub for as long as he could control his spasms, and then lie on the kitchen floor and abuse himself.

Lamont started the day like this. Every day. He lived a long life, friendless and detached until he visited the coffeehouse where he was the life of the party.

As I child, I was a terror – my parents despaired they would ever control my behaviour.

Eventually, they turned to cruel and inhuman means to get me to toe the line. They told me that I really should be afraid of the dark and the bogeyman was actively looking for me; they warned me the monster under the bed was real, and he wanted to trap me and kill me!

All attempts to get me into bed at night, and keep me there.

What they didn’t know, was that the monster under the bed, was absolutely terrified… of me!

Clowns are monsters decked out so that we can laugh. The unexpected that would terrify us if we found one at the back door at midnight.
Carnivals always play on our fears and our desire to be frightened, just a little bit. Even the most cheerful pictures conceal a ride with heart-stopping disorientation.
If the ticket taker had worn a comical plaid suit, his presence in the mirror maze would have seemed explicable, part of the show.
It was late at night, and I didn’t recall many customers. His eyes held me as my heart beat faster. Could I escape?

People call her a monster, but Brian Transeau’s music in the movie telling the Aileen Wuornos story is breathtakingly beautiful.

I listen to it as I drift off to sleep at night; it helps me relax; and it inspires me…
It plays quietly in the background as I plan my own killing spree.

Not because I’m a monster – far from it – I seek beauty and peace from life, just like the music as it fills my thoughts.

My only wish, is for Transeau to write an equally beautiful soundtrack when they make the movie of my own life.

Monster
———
Anna burst in and screamed, “There’s an alien monster on board!”

As captain, I knew exactly what to do. “Jenkins,” I said to the most annoying crew member, “investigate the mysterious noises in the sewer line on deck 27. Metal man” (I call our synthetic person that to annoy it), “secretly work against us. Everyone else, split up and wander into dark corners to get picked off one by one.”

Of course the monster would get me at some point (because War Is Hell), but in the end Ripley would succeed in blasting it into space.

What could go wrong?

The third run at the monster truck rally was Albert’s time to shine.
He bolted into the muddy arena weaving among the moving vehicles.
Filth splashed, Albert flailed his arms and roared to get the crowd’s
attention. For several minutes, he danced with danger, dashing and
dodging until his foot slipped. Albert fell. Big Bertha rolled a
tire over him. The crowd voiced their horror and watched with morbid
fascination as Bertha slowly backed up to reveal Albert’s corpse, but
the rail thin man popped right up, already shouting his persona.
“Flat Jack available for parties, pranks, and general shocks.”

Frankenstein was not the monster. He was a scientist, a doctor, who got caught up in the furor of his era. Everyone back then was trying to find an elixir of life, a universal solvent, and a cure for worts. Vivisection, grave robbing, and reanimating the dead was just something a guy did to gain a foothold in the scientific community.
The creature that Frankenstein created wasn’t a monster either. He was just multiple victims of circumstance, all rolled into one big guy.
The real monster is the liberal news media casting a negative slant on good old fashioned science.

They say that the Universal Monster movies represent different stages of life.
Frankenstein represents our youth, because he is so innocent and fresh… until he throws a tantrum.
The Wolfman represents our adolescence, with hair growing out of weird unexpected places and unusual appetites.
Dracula represents the cool suave sex god we all wish to be in our adulthood.
And The Mummy represents the slow creepy horror of Death approaching.
All of the Bride and Son movies represent family obligations.
And then there’s the Abbott and Costello Meet movies.
They represent the need to do shameful things for a paycheck.