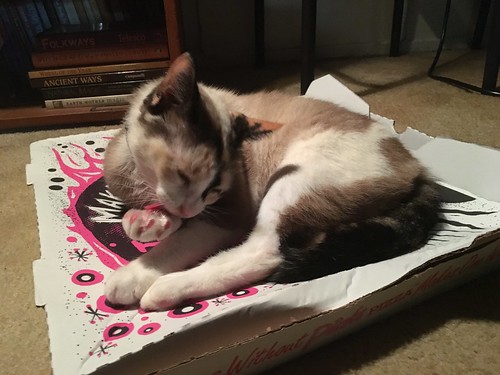 Ok Ok. I know. It seemed like a good idea at the time. I got the good stuff, there was a lot time to figure out how to get out of the deal. Ya Ya, the quy has offered the same deal to bunches of folk over the millenniums. There’s a mess of operas and poems about how it turn out so wrong, but I’m a damn clever guy. I got an ace up my sleeve. So now at 110 years old, think I’ll lay it on the table.

Méphistophélès is turned away by the shining sword of the archangel.

This concerns the gaseous expression of hydrocarbons in and about the home.
My aunt was lighting a birthday cake with her butane grill lighter, and feeling an august explosion forthcoming, she reached behind her and lit it off, unknowingly starting the dining room curtains on fire.

She brought the cake into the living room as the house filled with smoke and flames. The fire squad put it out.

They offered me a deal: Names, in exchange for immunity from prosecution and a new identity.

I wasn’t sure about the ‘new identity’. The people I mixed with didn’t like snitches, if they caught up with me, who knows what they’d do?

Changing my name and relocating wouldn’t be enough, if I was recognised it was definitely game over.

“Don’t worry, kid, we can fix it so your own mother won’t recognise you!”

I gave them the names.

They set me up! Told the gang, and left me to their mercies.

My own mother didn’t recognise me after they’d finished!

The Art of the Deal
by Jeffrey Fischer

“Deal me in.” I sat at the empty chair and tossed some cash into the pile. I sensed a big night coming for me.

As the hours wore down, so did my stakes. These pups were taking me to the cleaners! I felt my anger begin to rise, but I kept my cool.

Finally I was out. Beaten. The dollars weren’t the issue: I could afford to lose them. No, it was the blow to my pride that stuck with me. Who’d have thought dogs would be so good at playing poker? Must be all that practice those hounds got while posing for endless portraits.

The deal was that you’d never scream at me. The deal was that a smile would be a smile and not a sarcastic sneer thrown at my soul. The deal was that I would live today, dream of tomorrow, regret nothing of the past. And now, I live today, dreading tomorrow and desperately trying to forget what happened. The more they told me to walk away, the more I pretended not to listen. I covered my ears, shut my eyes, sheltered my soul, and one day, in darkness, I decided to leave. May my tombstone read “The deal was broken.”

Here’s the deal: Keep your mouth shut about what you’ve seen and neither of us have to worry about any comebacks – me, hassle from the law, and you, hassle from me.

Of course, I’m taking a risk in letting you go. It’s not what I’d normally do. You see I prefer to go by the principal of ‘dead men can’t talk’, but I think you’ll agree that one murder tonight is enough?

Even so, I’ll need to be sure… Mute men can’t talk either!

Did I say ‘keep your mouth shut’? What I meant to say was…

The cameras go 200 frames per second, and I had to single-step to see it. Dealing from the bottom, under the top, peeking at the corners, faster than the eye could see.

Faster than human fingers could move.

“Android or just enhanced, we need a SWAT team to handle this one,” I said.

Sometimes I think we should give up and let anything sit at a poker table. They did that in sports years ago.

Comedy boot camp isn’t pretty. It isn’t meant to be. It exists to separate class clowns from comedians. New recruits are barraged with questions requiring rapid-fire responses. The first question is always, “what’s the deal with airline food?”

Routinely instructors yell “drop and give me twenty!” A recruit goes to his knees and begins shouting “Well, excuuuse meee!” Everyone thinks they can do twenty at first. After ten they’re sweating and shaking. They say it builds character.

At the end comes Hell Week. It involves drill instructors screaming orders as they randomly change persona from Sam Kinison to Jerry Lewis.

The deals of the table were red, Scots pine, not white: which meant that we could afford it. The lumberman told us that the white, from Norway spruce, might be stronger, but would be more expensive. He said the table would be very serviceable in any case, and vastly cheaper than one of hardwood.

We cared little for the ultimate quality of the table. It would soon be scarred by the strokes of our cleavers and saws. A plain deal table was all that was needed for our purpose.

The pine would burn readily, leaving no evidence for Scotland Yard.

Axelrod wondered how fate could deal him such a crappy hand.
Born on the Galactic Battle Base to low ranking personnel who had as little ambition to transfer to a planet side duty assignment as they did to advance their careers enough to get a larger cube closer to the entertainment sectors.
Axel had twenty years of drudgery to look forward to before he could he could transfered out on his own merit.
He’d heard that others deal in black market goods.
That could be exciting, and get him a shuttle off the giant tube before he’s forty years old.

Back in the Seventies, there was this game show called Let’s Make A Deal.
Audience members dressed up in stupid and crazy costumes, and the host would invite them to trade for various unknown items in a box or behind a curtain.
The best game was when the host offered money for a particular common item, like a comb or a toothbrush.
Things got awkward when he asked for a flask of whiskey or pain pills.
And downright awkward when he held up a twenty for a blowjob.
“If I feel your teeth,” said the host. “You only get five.”