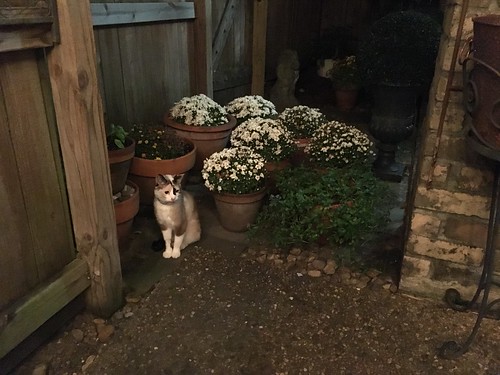 Mary recognized the smell as soon as she opened the door. She worked as an EMT and was trained to detect even small odors of gas. Her training told her to leave the house immediately, find a safe place, and call 911. She debated doing that but, against her better judgment, she stayed put.

“Har-OLD!” she bellowed, opening as many windows as she could. “Don’t you notice that overpowering smell? I told you to do something about it the last time this happened!”

Her husband appeared in the doorway. “Sorry, dear. I filled up the tank today, and you know I can’t resist those 7-11 burritos.”

It was about time I did my bit for the environment, using alternative energy.

I tried solar power – but it’s never sunny in Britain; I’m too far from the sea for wave power, and I couldn’t get planning permission for a wind turbine. So, I bought some cows and all my energy needs are now supplied from bovine methane.

It has drawbacks – like angry neighbours complaining about the smell, but it’s definitely the right approach.

Even the cows approve – many times whilst inserting gas collection pipes, (unpleasant, but necessary!) – I’ve received a pat on the back!

Conrad had a tough childhood. His parents were sorry he was born. He grew sorry as well.

He was a goofy kid, with no merit at all. He matured and soon became a lazy, loud bully in his pre-teen years. His parents made a decision, and took Conrad with them when they visited relatives in Oklahoma.

They left Conrad staked to the grassy knoll behind the Conoco station in Ponca City, just a bit off Highway 60.

He was discovered by a couple stopping to picnic nearby. It was too late. Coyotes had gnawed off his legs and his ears.

A visible plume of gas rose from the couch cushions. The toxic soup that covered the inside of the living room had subsided a bit, and now we dealt with the destruction and poisons left behind by the floodwaters.

A fish wiggled in the corner until the cat’s eyes were drawn to it. A fresh, but tainted meal for a hungry pet.

We shared cans of pork and beans, crackers, and cans of lukewarm soda. Uncle Larry drank what was left of the whiskey in the cabinet, until he sank into a stupor.

A bullfrog jumped out of the bookcase.

Classical Gas
40 years ago at the end of the Summer of Love a curious film was show on The Smothers Brothers Comedy Hour. It was called 3000 Years of Art by Dan McLaughlin. 100s of the world’s greatest works of art flash by at ten of a second. The driving music behind that river of art was Classical Gas by Mason Williams. By today’s standards a quant footnote of the counter culture. But at the time it was pretty impressive, so much so it ended by aspirations at an accountant and set me on the path to a career in art.

They Are Really Quite Safe

The last time I was there they made quite a deal about how the most important documents of American History were preserved in Argon. That is, The Declaration of Independence, The Constitution, and The Bill of Rights, which you can see right in front of you, are in chambers filled with Argon. Moreover, they showed us a model of how, in a flash, those chambers, with their documents, could be lowered into a huge lead vault, sufficient, they believed, to survive a direct nuclear attack. Some people call the building The Tomb of Liberty.

Argon is a very Noble Gas.

The painting on the wall flickered, alive with the dancing flames of the gas fireplace. The man sat on a chair. His attention was on the geometric face. He had never intended it to come out like that but he thought it was beautiful. He cleaned his hands with a colorful cloth. She hated that. She hated the smell too. She hated when he sat in the living-room in his “rags”, as she called his painting overalls. When she saw the painting, she wanted to burn it. His nails had red underneath, and the painting was still on the wall.

Most people are completely uninformed about us cannibals. We’re more refined than you might think.

We’ve good jobs, lovely homes, and hold responsible roles in society. Although we may enjoy the odd meal of human flesh, it’s not some sort of zombie ready meal; it’s far more likely to be a slow roasted escalope of thigh, with a balsamic reduction, accompanied by a good pinot noir.

You certainly won’t find us daubed in paint, dancing half naked around a couple of missionaries in a massive cauldron, bubbling over a log fire.

These days, we’re cooking on gas!

Axel didn’t need to read the platform numbers as he descended the stairs to know he neared the lowest levels of the Galactic Battle Base. Level fifty was the water storage level, and forty-nine was sewerage treatment. The smell of methane gas told him forty-nine was only a few levels away.
Exiting the stairs at level forty-eight he stepped into the passage link deciding which way to turn. Recycling centers dotted the length and circumference of the forty-eighth level. He had to find the center where Astrah, worked. The center where they recycled items other than, old jumpsuits and uneaten food.

As the dentist left the room I moved the mask from my nose to mouth and took a couple deep breaths. The hose fell off the mask. My arms seemed twenty feet away as I fixed it and put it back on my nose. The little outlet valve popped into my lap. Feeling around with tingling fingers I got it on just as the dentist returned.

Nothing happened. He turned it up some more. Nothing. He reached over and flicked the mask with his finger. I saw God. Best dentist ever!

Yes, you always do, or leave a window open, or something. That’s why I check everything myself after you’re in the car. But all the way it’s, “I left the back door open! I shut the neighbours’ cat inside!”

One year, she kept this up every day of the holiday.

“Hey, it’s so quiet!” said the kids on the way back. “And so much space! Did we leave something behind?”

“Not accidentally,” I say, and drive on.

All of the refineries shut down when the hurricane passed through.
It’s taking a while for the engineers to get them back up and running.
Gas prices went up. The numbers on the signs ticked up daily.
That is, if they had any gas to sell.
Some places just have Premium, and others just have Regular.
A lot of them don’t have any gas at all.
All the stations along the highway are dry.
But they keep their signs lit, luring people in.
I guess they’re hoping to sell lottery tickets, or milk at five dollars a gallon or something.