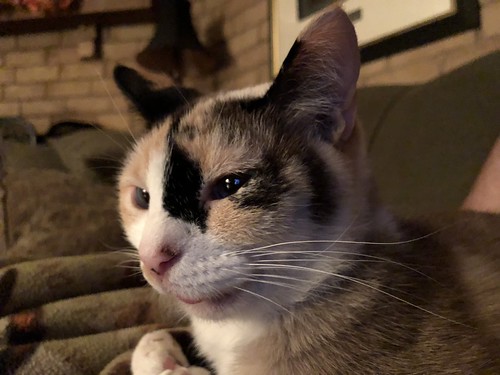 Belinda was a masked individual. Her face had been traumatically altered in an accident when she was young. Surgeons had attempted facial reconstruction at that time with little success. As an adult, Belinda held various back room jobs in stores as well as in restaurant kitchens. She could not work in view of the public for fear that the scars would scare patrons. She failed to inure advancement in office jobs because of an overriding fear on the part of her employers that the face of trauma might intimidate female co-workers. She maintained routine visits with a plastic surgeon. In time, the appearance of scarring no longer shocked the world. In time, she began to feel less guilt for being a monster.

What The Eye Don’t See
by Jeffrey Fischer

You bought a mask, I put it on
You never thought to ask me
If I wear it when you’re gone

Get real
— Sisters of Mercy, “When You Don’t See Me”

My boss chewed me out because I was late. I tried to look contrite. He chewed me out again when he read my report – not up to standards, he said. I smiled wanly and said I would rewrite it; surely it would be better with his comments. At the staff meeting, the section chief commended the group for their efforts over the past year and those who made the company proud would be honored at this afternoon’s company-wide awards ceremony, though he noted that some weren’t pulling their weight. He stared at me while making that last point. I kept my mask on.

At lunch I went to the garage, found my car, popped the trunk, and took out the guns stored there. Screw the mask I had kept for many years. Today I had my own way of rewarding the company’s overachievers.

It was one of those priceless moments.

A real trouser-tearer that practicality echoed throughout the chapel during the solemn silence. As for the culprit, we never found out.

The timing was perfect, the incongruity and inappropriateness, delicious… And my response, all too predictable.

I tried to mask it, but the badly disguised smirk on my face was obvious. As were the shoulders of the mourners in front of me, shaking with barely suppressed mirth.

With superhuman control, we somehow managed to regain our composure…

But it made for an unforgettable send off, for a somewhat less than memorable acquaintance!

You see it everywhere – at every protest, every riot, every scene of political unrest.

The Guy Fawkes’ mask – now wholly appropriated as the best-dressed protester’s choice for anonymity. It’s replaced the balaclava with its overtly paramilitary overtones, whilst the old standby – a scarf covering the face – suggests a lack of preparation and any real dedication to the cause.

I can’t help wondering what old Guy Fawkes would have made of it. I can imagine him smiling at the thought. Although you’d never know it… On account of the Guy Fawkes mask that he always insisted on wearing!

He started to wear mask the day he was convicted of pederasty in the small town where he lived. He further disguised himself by gaining a hundred pounds and changing his dress style. He disguised his voice by getting a private voice coach.

No one ever questioned his mask. He voluntarily revealed the disfigurement he suffered in Paris from an acid attack. He wore a scarf tight, to further disguise himself and to heighten the illusion.

Unknowingly, the mask was that of Oscar Fingal O’Flahertie Wills Wilde. Literati and hipsters put two and two together, so his secret was out.

I couldn’t mask the smell by spraying lemon oil. The odor persisted. Someone had “upper decked” my commode during the party. It was the gardener – recently fired for his poor attitude and his outrageous rates. I invited him because he was a relative.

The prank blocked the outflow, and the subsequent eruption caused havoc and an odor that triggered most of the party-goers to leave, dry-heaving and retching as they went out the doors.

I was never able to prove whom the guilty party was, but from that day on, I made it my duty to “upper deck” everyone’s toilet.

“Would you like something to mask the pain?” I asked, with genuine concern in my voice.

You nodded, through the agony, teeth gritted, eyes wide with pleading.

I wanted to be certain that I understood what you were telling me.

“Yes!” You screamed, with all the strength you could muster.

Well, that was pretty clear, and to be honest, I was a little surprised. But, I wouldn’t argue, if that’s what you wanted.

So I hacked off your feet too.

“There you go. That should take your mind off what’s left of your hands!”

Before Me and Behind Me
By
Jon DeCles
We mask our feelings: we mask our fears, we mask our joys, showing nothing to those around us. Our masks are armor that protects us from the untoward unrealized threat.
But worse than the mask we wear to show to others how little power they have over us is the mask we wear that faces inward, the mask we show unto ourselves, pretending who we want to be and looking at that mask and believing we are that, and not the shadowy person who lives behind the public mask, the inner mask, the person whose raw nature we fear most.

My Salad Days, When I Was Green in Judgement, Cold in Blood
By
Jon DeCles

A salad is usually made by the chef, but only on rare occasions does the chef actually cook a salad, so on those occasions is he cooking or not? We could call him a cook, but suppose the cook works in a salad bar? Or how about those occasions when desert is assembled out of freshly chilled raw comestibles, like fruit or ice? There is a delightful Philippine desert made of what I think to be slightly fermented fruits mixed with small chunks of ice: that’s not cooking, is it? But we do have it prepared by the cook, no?.

Return with us now to those thrilling days of yesteryear

It was 1957 and every kid who could talk their parents into springing the coin wanted to be the Lone Ranger for Halloween. Rudy had not only got the cool black mask, six shooter, and silver bullets. He had also convinced his less than enthusiastic little brother Lenny to accompany him as Tonto. For the greater part of the night they were racking in serious sugar cash, but then a pack of kids dressed at the Butch Cavendish’s gang fell on them. “We’ve been in worst straights, Tonto.” “What do you mean ‘We’ Whiteman?” said Lenny exiting stage right.

Mask
———
The Red Flash and the accountant faced each other.

The accountant whipped off his mask, “No mere accountant I,” he said. “Behold Magnetron!”

“Curses! But your X-rays are powerless against–” Magnetron whipped off his mask, “Galaxian!”

“But I am really–” said Xray, whipping off his mask. “–Mr Neutrino! Nothing deflects me!”

“But I am–” said Galaxian, whipping off his mask, “Nigel Weems, Accountant! Your neutrinos are a mere accounting error!”

Nigel awoke, sighed and returned to his desk.

The security guard strode down the passage.
Axel looked anywhere beside the advancing officer, hoping to mask his overwhelming anxiety.
His worst fears were realized when the man stopped in front of him.
“You’re in a controlled sector. Why are you here?” the guard asked.
“I’m waiting for someone. And this isn’t a controlled sector, or I couldn’t have walked into this passage,” Axel countered feigning bravado.
His act didn’t work. The guard suddenly had him in a choke hold, dragging him toward the link.
“You’re here to make a drug deal and I’m going to find out for whom.”

“What do you think, Jack?” she asked, flaunting her new look.

The mask advertised a fresh new face in just twenty-four hours and
Sara couldn’t wait for Jack to see what she did for him, always for
him. They hadn’t spoken in weeks, but she kept tabs on where and what
he did. When the mutual friend’s party came up, Sara arrived smiling
with bright whites, tossing her blowout, and batting the eyelashes of
her new face.

Jack looked with his usual disdain and shook his head. “Sara,
nothing’s changed. Your insides are still showing. Go away, you
psycho bitch.”

The Devil was looking over my shoulder. Had been for ten minutes. Maybe an hour, I was pretty stoned. I didn’t want to say anything to anyone. They would just say, “you are so high!” So I sat there, hair on end. I decided one more look then I’d tell someone. I glanced around and his face shot toward me. I was up, across the room with the lights on in one move.

My “friend” stood in the corner with a Devil mask, laughing hysterically. I punched him in the chest as hard as I could, then we were cool.

Halloween was right around the corner.
Every year, Freddy trick-or-treated as a ghost, and his mother would take away his candy because he’d ruined a sheet.
Once again, he’d waited too long. The stores were out of costumes.
Even those crappy plastic smocks with the lame cardboard masks with elastic bands.
Freddy sighed, grabbed a sheet from the linen closet, and cut out two holes.
But this time, he’d take two candy bags.
One to stash the good stuff in a tree, and one to hand over when he got home.
Sadly, Freddy stashed the wrong bag in the tree.