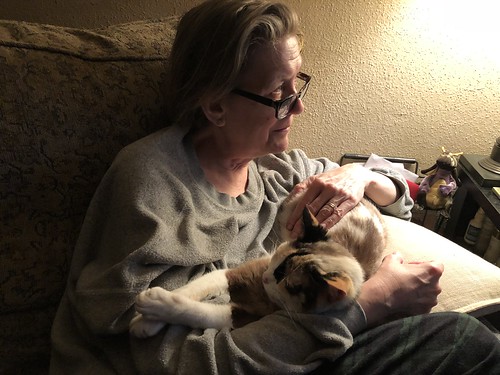 The boxer approached the ring on bouncing feet pausing for effect, pawing the air with a quick one two punch. Fans in the arena twirling towels above heads. Towels blazed in red and gold flame colors like flags. They were chanting the words “Knock out” pointing towards the seated opponent in her corner of the ring. The cadence of stomping feet made a dramatic scene for the pay per view audience.

Sometimes you have to be careful about what you ask for.

Work was tough: It was our busy time of the year, three people off sick, and I was expected to cover, do my own job and still meet the targets!

Then the regional manager called in, and I was summoned into his office.

“We want you to take on additional responsibilities…”

I protested. Asked him to cut me some slack.

A great big slice of slack – so now I don’t have to worry about any cover, there’s no targets and no additional responsibility.

And no job, either!

“Dust everywhere.” Whenever the Duchess arrived at the hotel, she criticized everything. “Look at this.” And she slapped the velvet on the chairs.

Mr. Roberts, the manager, smiled and nodded, gently guiding her towards the elevator. Once she was safely tucked away inside the diabolic machine, as she called it, peace would return.

When the diabolic machine, no doubt highly offended, decided to take revenge, plummeting two floors down into the dust infested cellar, the Duchess went to the papers and vowed never to stay there again.

The hotel then became extremely successful. Dust can be such a lifesaver.

There’s an art to this job – actually, it’s more a science than an art. You’d be surprised just how complex it is.

Too much slack, and they’ll crash into the ground below; messy, and a whole pile of paperwork to fill out.

A little less, and it gets even messier – you can imagine what being brought up short from a drop like that does to a body!

Too little, and they just hang there, dangling like a broken puppet – hardly ideal.

And the science comes in handy when I’m doing executions too!

GO Down to the Sea in Ships

The Mother watched in horror as the child pitch over the edge of the boat. The rope tied to the child trailed under the bow. If she put it tough her baby would be pull against and under. If she let the line go slack she had to trust the little one would boob to the surface. Though her white knuckles held the rope with a vice like grip she willed her arm to remain frozen. It was the hardest thing she had ever done in her life. When Sally surfaced she hooked the vest and pulled her into the boat.

Back in the early 80s, in high school, the marching band was taken VERY SERIOUSLY. Oh, not by the students, who, like now, found everything hilarious, but by the earnest band director. His opening speech at the start of the year included a version of: “I know you kids like to wear jeans and such, but we’re not going to do that. In my room, the girls will wear skirts or dresses and the boys will wear a nice pair of slacks.” This inevitably cracked up the room. The director, who apparently was unaware of the word “pants,” would turn red and demand to know what was so funny. Just say it out loud: “slacks.” It’s a funny word. Especially when you’re 16.

Jimmy pulled in the slack of his line bringing the bait right in front of the fish’s nose. He could see his next meal hovering in the shadows beneath the bank. If only the trout was as hungry as he was. Then it would bite.

Thramble, the rock troll, crept as silently as a rock troll could, his net held ready to cast on the boy. Just two more steps and he would have his lunch.

The trout dashed into hiding.

Consequently, no one got to eat.

Tightrope walkers have always been some amazing risk takers. That’s what makes a good sport. They have crossed Niagara Falls, the Thames River and high between too many skyscrapers to even list.

Todays sport balance aficionados are slackers. No, literally slackers. While the rope walkers of yore would be hundreds of feet in the air and no net, today we find everyone showing off their skills on a “slackline.” A limp rope two feet above the nice soft grass. When tightrope walkers failed, it was epic, deadly and made the paper. Today they just get a rope rope burn.

Slack
———
Bring me the metal and I can forge anything into a knife. Steel cable, a motorbike chain, the lock on a condemned cell, anything. Then there’s the quenching. What goes in the slack tub can get rather esoteric. Ordinarily it’s water or oil, sometimes sand, but a lot of people, usually from biker gangs, think bulls’ blood is just the thing. One client asked for baby fat, but it’s just too difficult to get in any quantity. The knife I’m forging right now, he wants it quenched in a live human body.

George was a pirate, but he wasn’t a very good pirate.
He got caught a lot.
Dragged from a jail cell and into a courtyard, a yardarm and a noose waited for George.
“Any last words?” asked the magistrate.
“I guess I’ve come to the end of my rope,” said George.
The magistrate put the noose around George’s neck, tightened it, and shoved him off of the platform.
George landed on the ground below.
“You didn’t tie it down,” said George, laughing, and he ran for his ship.
They added the theft of a rope to his list of charges.