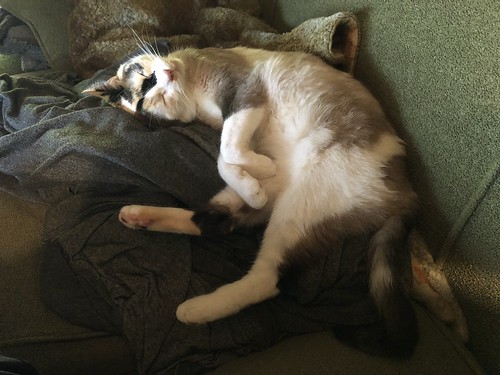 Driver error
———
In a traffic accident between a robot and a human, it’s always “driver error”, That is, human driver error. Or if all the vehicles were automatics, it will be “passenger error”. If there’s a human anywhere on the scene, it’s “human error”. “Programmer error” used to be a thing, but there are no human programmers any more. The AIs design each other and learn from the entire lottayottabytes of everything that has happened everywhere since their inception, so of course they must be infallible.

At least, that’s what the robolawyers and robojudges say, and what human can argue with them?

I recently came across an article about how a dodgy graphics driver caused Second Life to wreck printers.

Personally, I doubted a simple driver error could destroy hardware, but it intrigued me enough to want to try.

Obviously, I wasn’t going to write malicious code on my own system, but tech support at work had been giving me hassle lately, so…

Not only did it fry the printers, it destroyed hard drives, backup servers and – to my horror – the missile launch safety devices.

I was the key driver in the campaign to reveal key, driver errors in many of the millions of Tweets posted. I comment on blatant bullshitery and skanks posting close ups of their belly buttons, or twee twinks posting selfies while holding their shirts up with the other hand.
I began with the obvious. Neon signs reading “OPEN” are usually left on because the person charged with shutting them off at closing forgets, or they turn them on and they burn brightly in the night until they cease to function.

My lesson is: ignore all of them, all the time.

The driver error began with the tray, attached to the steering wheel. It was compounded by the purchase of a double Reuben sandwich, with a large dill pickle on the side.

Moving onto the on ramp and getting up to highway speed was a cinch, since Bob had a new Challenger.

Bob dropped half his sandwich into his lap. The dill slipped out of his grip and shot across the center console into the bucket seat next to him.

He unbuckled and stretched across the seats, just as the semi in front of him braked hard to avoid another truck.

The new order of sex dolls came in, and we started to check them out. The boss wanted to open his new Sex Doll Brothel on Labor Day.

Adjustments were necessary and some touch ups of wigs, makeup, and software. The new models had a glitch and the manufacturer was scheduled to push out some updated code and a new firmware patch.

The firmware patch was installed, and the prepped doll was the first put on line. Unfortunately, a driver error caused the doll to squeeze with a 2 ton force, removing the client’s neither region with an ugly consequence.

Reuben stepped up to the first tee and waggled his new driver. A Callaway Epic Star, this piece of titanium set him back $700 but he was going to blow away his playing partners. He hit the ball with a mighty wallop and shanked it, spinning the ball off the fairway and into a sand trap. The process repeated itself on subsequent holes with minor variations: a slice here, a hook there. In other words, golf as usual. At the Nineteenth Hole bar, Reuben, who had bragged about the new club, now blamed his purchase. “Driver error,” he muttered by way of explanation.

Life in the Fast Lane
by Jeffrey Fischer

The foursome, now thoroughly lubricated after 90 minutes in the bar, climbed into Reuben’s Jaguar. He punched on the satellite radio, tuned to a classic rock station, and sped out of the country club, leaving a small dust cloud behind him from the gravel road. Turning on to the highway, he accelerated until the big car was cruising at 80 miles per hour. Given his state of inebriation, Reuben required all three lanes to keep the car on the pavement as his terrified passengers tried to get him to slow down. When the car crashed through a barrier and sailed off an overpass, Reuben’s last thought on Earth was, “Another driver error.”

They say driver error is one of the main causes of accidents.

Taking unnecessary risks; pulling out, without looking; driving with excess alcohol and drugs…

Those are the assumptions that they’ll make, when they find your mangled body in the equally mangled wreckage of your car, scattered across the interchange.

When they smell the alcohol and find the trace amphetamines in your system, they won’t have to look any further: It’ll be pretty obvious what led to your demise.

Which is probably just as well.

Because I wouldn’t like them investigating any further and finding I severed the brake pipes!

The monitor of the car kept flashing “DRIVER ERROR.” This didn’t stop the vehicle from climbing to 135 mph. “Look who’s talking, we just past a hospital, a grade school and a graveyard entrance. And I might clearly point out the 25 mph speed limits signs. The screen when blank for a second, then flashed “Fuck You.” Jack press the manual over ride button. The car slowed to a stop, but then started rolling in reverse upto the lychgate. “Driver error” flash once, then the car exploded, but not before the on board speakers wailed, “That mean’s you monkey boy.”

Eight horses galloped together down the steep and rocky dirt road that descended from the Sierra on the last real mountain leg of the trip from Virginia City to San Francisco. The lady passengers inside the stage coach were grateful for the ample padding of their fashionable clothes, while the men who could afford decent hotel accommodations looked forward to the luxury of hot water in a tub to ease the bumps and bruises that are part and parcel of stage coach travel in the West.

Nobody expected any fallen tree, any driver error, nor steep cliff, nor sudden death.

Billbert and Linoliumanda reached the police officers at the same time as Mr. Withybotham.
The man gasped, “My wife was in the backyard with my daughter and this boy when they suddenly dissappeared.”
Billbert said, “We were playing ‘Broom Races’. Maybe we got carried away. We ran down the street.”
Linoliumanda nodded enthusiastically.
Her dad shook his head. “Mallodora said you two were on a single broom, running around the backyard. She turned her back for a moment, and you were gone. How did you get into the front yard so fast?”
Billbert grinned and shrugged.”Would you believe Driver Error?”

Falling to my knees I gaze upon the trunk before me. Aged, forgotten, as the layers of dust attest. Uncertain fingers find the keyhole in the waning light and I insert the brass key.

Never again, not me, not me…tumbles in a rush from my lips in fear, yet the compulsion is unabated. An onslaught of memories and emotions torment me, yet still I must..

Within…is me, what I once was. Now? A simple data transfer, new external shell, bits, bytes, and processors. Voila. Me. 2.0.

Lies, I think, another advertisement obstructing my view. Then…

A tiny being climbs upon the mouse and scrolls the wheel across the long slender keyboard. The adventure awaits in a world of her design.

Approaching a pixelated swirling screen she clicks the button and LIFTOFF!!! into a swirling tunnel of color, magic, and wonderment. Still filled with the vibrations of the fear-filled life shes left behind, yet buzzing with the excitement of the world approaching.

Safety gained lightyears away from reality where love exists and harm an unknown. Guided only by heart, a deep voice within screams ABANDON!!! Suddenly her mouse vanishes into thin air….spinning, driver error, failure CRASH!!!!

Hospitals can cure anything, really.
Just upload the consciousness to a storage facility, take a DNA sample, make the necessary changes, speedgrow a clone, and inject the consciousness into the new body.
While the clone grows, there are mechanical bodies available for use.
Some people don’t like to wait in the white noise of the mainframe, so a mech lets them keep busy.
Usually, installation is smooth and painless, but sometimes things go wrong.
Families don’t deal well with those.
So, the doctors return the body to demo mode, and it sits and smiles and blinks and remains peacefully silent.