NOTE: I ramble for a bit. Skip ahead to 8 minutes if you don’t want to listen to the ramble. 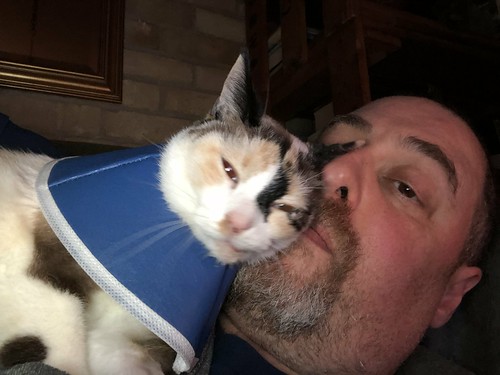 She was supposed to read those damn books. She did pick one of them up once. Don’t do this, don’t do that.
She looked out the window. It looked bleak. Pollution, you see. And they were worried because she smoked. She was one of the last few who did. Smoking had been banned.
The door opened.
“Ready?”
She nodded.
“What did you read?”
“That one.”
“Good. You may go. Tomorrow, more.”
She nodded meekly.
Now I need a cigarette, she thought.
She wasn’t sure what she was addicted to, whether the cigarettes or just being subversive.

This topic comes at a really bad time for me.

At the weekend, someone I’m very close to, and whose odd behaviour I’d been becoming increasingly concerned about, told me they were on the verge of alcoholism. Currently to the tune of three litres of vodka a week.

You do what you can: You counsel, advise, provide a shoulder to cry on, nag, bully and console.

Then sit at home, worrying if they’re OK and whether they’ve given in again to their demons… Because you can’t be there all the time.

And write pointless words that don’t help at all.

My addictive personality includes several favorite, known addictions of the modern world. Number one is food, two, the bombardment of the nucleus accumbens with a tidal wave of dopamine, and three is gazing upon the sprawling, audacious, naked body of a puppy at playtime.

Addictions are to be refined and honed once they have been narrowed to those that supply the most satisfaction. Some can be refined to the point that they, too, become addictions themselves. A love of food is one thing, but a love of sweets or salty things is another.

You can be addicted to addictions.

I’m fascinated by the assemblage of personalities that are accepted by the show’s producers. There are very short men that have been stunted by organ birth defects, gorgeous, tall blond women that are not shy about showing off their rounder bits in the dorm hot tub, and mouthy black women that shun authority and team cooperation.

Addictive
———
People complain that computer games are addictive, but that just means that people want to play them. What are we supposed to do, make games no-one wants to play? Apparently so, because we got commissioned to make a game about the dangers of gaming. Of course none of the kids want to play this lead balloon. That’s what non-addictive means, dum-dums.

But it’s popular with parents, teachers, and the whole educational system, because it’s another thing they can make the kids do that they don’t want to do. Like Orwell said, the purpose of power is power, the final addiction.

A staunch liberal, Nelson boycotted Chick-fil-A over its founders’ views on homosexuality. Then it occurred to him a lot of people seemed to like the chain, and they couldn’t all be right-wing crazies. He ate there to find out why. The long line moved quickly and the friendly cashier wished him a pleasant day. As soon as he bit into his sandwich, he felt warm and content. He returned every day for lunch that week. Surely the evil chain added something addictive to its food. A chemist analyzed the ingredients but found nothing.

Summoning all his willpower, Nelson avoided Chick-fil-A on his next lunch break, stopping instead at a trendy salad place. “Whaddya want?” asked the surly clerk. “Hurry up, I don’t have all day.” Nelson realized what the addictive ingredient was: pleasant, polite staff who treated all customers well.

You can’t blame me for the things that I do. Just because they may be unpleasant, antisocial, immoral and illegal doesn’t automatically make me a bad person.

And there’s nothing you can do about it anyway, because thanks to political correctness gone mad, I can express myself in any way I want. It’s my right and you can’t tell me otherwise.

Try it… And I’ll see you in court!

Addictive? Many things are known, seen, and recognized as addictive. The un-noticed addictions left from scarred past experience are the worst.

Painfully lived and experienced from a place within unseen by those around you but burn like a brush fire to the very core.

All consuming friends and enemies intertwined that make up an image that gets presented to you, a mere shell, acceptable to the world in a space of unwillingness and unforgiving making it unbearable to breathe.

Outward standards set beyond our means and control creating an addiction to please that traps you in the hamster’s wheel of…Existence!!!!

Too Cute to Kill
If you’re going to a have an addiction a hand-held video game isn’t a bad
choice. How much money can you really spend through google games? Wear and
tear on the body? Pretty minimal. Loss of family and friends, not likely.
With all that said, I did actually hit bottom on Panda Pop. I was slumped
in a chair in a Panda Pop Den and this ancient magus taps me on the
shoulder to inform me that 1000 new level had been add. I scrolled down to
delete and never looked back. “Hey Mac pour me other red bull and
schnaaps.”

The policeman closed his notebook. “I can see there has been no kidnapping.”

Mr. Withybotham watched the officer leave before scowling his way back into the house.

Tentatively, she took his hand. Like Peter Pan and Wendy they flew up around the maple tree. They landed on the porch just before Mr. Withybotham opened the door to call them in. He frowned. “Why are you holding hands?”

the vet found a mass under my cat’s skin.
then another. and two more.
the surgery went well.
stitches and staples on the incisions.
and a protective collar.
we got home and i let her out.
she ate and drank just fine.
kibble, wet food, treats, and a plate with a dollop of whipped cream.
she ate it all up.
she slept on me for a bit.
then it was time for her pain medication.
she took that just fine, too.
and i had a drop of it.
and another. and another.
so. nice.
maybe she needs some more surgery?

One thought on “Weekly Challenge #647 – Addictive”