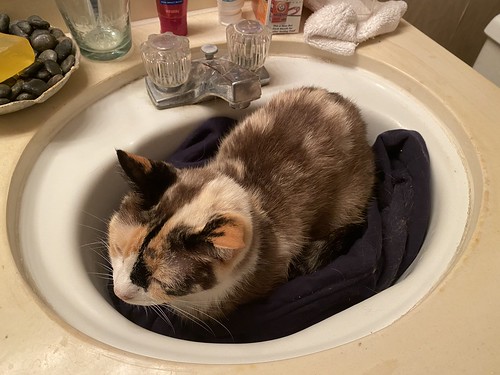 The train was too cramped. But she had no other option than to take this one.
A man was playing with a rope.
Too cramped, too awkward.
She wanted to get there quickly. The boat was ready and she was ready. Sailing around the world was her dream, and that dream was so close. She only needed to survive this bloody crowded train.
Suddenly, the train hiccuped, startling everyone.
When she woke up, a rope tied her to a pipe on the wall and the police were knocking at the door.
She wanted to scream. Horrified, she realized she couldn’t…

It’s out there, lurking in the darkness. Watching and waiting, hoping for an unguarded moment and the opportunity to strike.

Prowling silently: You know it’s there, but where and when that moment will come remains unknown.

It’s waiting for you.

Which leaves the question, what do you do now?

Do you hide away?

Or stand and fight?

Are you prepared to take the risk and sit tight in the hope that it will go away?

Or risk all, and face the challenge, head on?

Well, how about it, what are you going to do?

I don’t feel very creative right now. I wish I had an inner impatient writer yearning to burst forth an utterance as the acorn seed waits to push out an Oak.
“You’re a discovery writer” someone once told me. At times I’m like a young child whose overloaded paintbrush hits the paper and a fat line of liquid aubergine appears and shocks, threatening and promising to bring presence to everything. At that young age I was attuned to the risk and ecstacy of self expression… one finger scratching my chin purple as watery orange rivulets dribble at will.

Prowling; Canon
—-
While prowling through the canon of great literature, the celebrated Shakespeare scholar Bagnold P. Bagnold chanced upon a curious work bound with a rare 18th century edition of Shakespeare. It purported to tell that playwright’s life, but its sordid and implausible detail suggested it might have been penned by the Marquis de Sade.

He discreetly consulted with some specialists in old manuscripts, who pronounced that the pages were certainly contemporaneous with the rest of the volume.

But the detail that dissuaded him from revealing it to the world was the author’s name. He identified himself only by the initials B.P.B.

I was a good kid. Never got into trouble, always behaved perfectly, and was the very model of good behaviour.

As a teenager, whilst my peers might well be described as juvenile delinquents, I bucked the trend. Butter wouldn’t melt in my mouth.

But now, I’m all grown up, and with the maturity that comes from adulthood I’ve decided that my time has come.

All that pent up anger; the rage; the disobedience and bad behaviour I never let out as a youngster is all about to be released…

First we kill the Writer

Everything around here is fuckn Canon. The producers got a bigger bible then the King James, and hell of a lot less poetic. The main character is british, but rasied by wolvies on the russian steeps. They want a wolf russian hip-hop delievery. I say buddie this. It turns out the money behind the money, is a guy so damn close to Putin. So I repeat everything around here is fuckn Canon. I suggested, suggested possiblely the love interest was from …. say Ukraine. Found a dead horse’s head in my bed. Really funny, you fucks. Now, its Putin’s niece, Fuck.

“Dad. I didn’t know you played chess in high school,” Billbert said.
His father laughed. “You don’t know everything about my past, Son. I wasn’t a juvenal delinquent, but I was a bit of a loose cannon. Your mother settled me down a lot.”
They pulled into an all night diner and went inside, unaware of the woman prowling the parking lot.
When the waitress came to Billbert, he said, “I’d like to order the All Day Two Egg breakfast, too.”
Outside, Nuclear Fission didn’t risk standing beneath parking lot lights knowing her spray tan disguise wouldn’t fool the Blanketmakers.

They lurked behind the corner of Jaden’s house, barely stifling their giggles, unable to manage the adrenaline flooding their systems. Braxton peered out, checking if the coast was clear.
“Can you see her?” Jaden hissed, too loudly.
Braxton could easily see their target, but they both knew if Emmy spotted them before they reached paydirt, they would be caught.
“No,” Braxton whispered back, keeping his volume low. “On three,” he commanded. “One… Two…”
“Three!” they gasped in unison, simultaneously sprinting from cover.
As they barreled toward the base, Braxton spotted Emmy breaking from her cover, determined to cut them off.

Nobody ever saw Mindy Bakersfield’s face.
She wore a full diving suit with air tanks.
A note from her parents allowed her to skip Gym class.
Eating her lunch all by herself in a special room, and a special bathroom set aside, too.
Kids dared each other to try to pull her helmet off.
Bobby Watkins managed to attach a mini-camera to the helmet.
But when Mindy took it off for lunch, the camera faced the wall and it never caught her face.
The next day, Bobby wasn’t there.
His family suddenly moved away.
And Mindy sat in his seat.