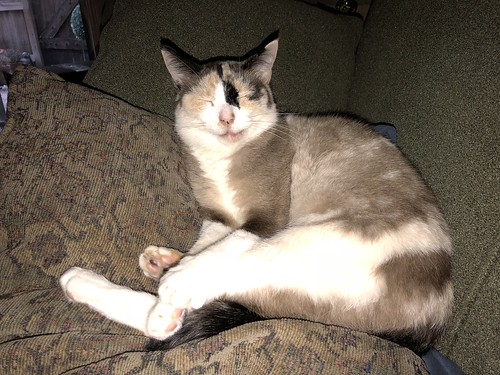 As a country boy from rural Connecticut, I started chasing tail in grammar school. I learned many useful skills and strategies from my grandfather, Pete, and from my uncle Jim. Grandpa was a carpenter, and Jim was a Chief Gunner in the Navy.

The tail I chased was attached to a little, red fox that lived in the woods in back of the house. I would walk into the woods and stay there, quietly reading, until I heard the rustle of leaves. I’d look up, waiting for a glimpse of the fox.

There it was, the long, white-tipped, bushy tail.

I chased my tail for the first 30 years of my life. College was a waste of time and money. After I learned to handle a gun and spend some time in prison, I realized I could make a good living as a thief and drug dealer.

After accumulating a sizable amount of money, still in my thirties, I found a rich sponsor with similar, political ambitions. He sponsored me and I worked my way through city councils, mayorships, the House and the Senate.

I will probably be elected governor next election if I can get all my records purged.

I sometimes feel I’m going round in circles with this hundred word story lark – I churn one story out, then it’s time for another, week after week, story after story.

I like to think some day I’ll find that elusive combination of one hundred words: The Holy Grail, so perfect and sublime I can finally lay aside my notebook, retire my keyboard, and be at peace, knowing that no matter how many more words I write, I’ll never do better.

I haven’t found it yet though, so until I do, I shall continue in my quest… chasing my tale.

Chasing my own tail
———
I spotted the tail the moment I went out. It was a cold November evening, so I decided to tire him by walking about the city at random, as if sightseeing. I stopped for a while in a coffee shop, forcing him to shiver in the cold across the street. At last I continued, but made a show of suspecting his presence. I briskened my pace, crossing busy roads at random, nimbly avoiding the traffic, until at last, I heard somewhere behind me a screech and a thud.

He thought he was tailing me, but I had been chasing him.

The whole event became a disaster when a stubborn sponsor decided not to give the organization the agreed amount.
Nine of the models chose to leave while the other five were unsure.
The designer couldn’t do the show with five models only.
Everyone was in a frenzy, debating the same issues over and over again when a woman came up from behind and laughed hysterically. She pulled out an automatic and took the money from the sponsor.
“No money. No show. No debate. There, solved. By the way, do you need a free model?” And she struck a pose, smiling.

A Tale of Tails
by Jeffrey Fischer

As a pup, I had hours of fun chasing my tail. Round and round, the furry thing was always just out of reach. Big Man thought it was funny, and I suppose I did, too. When I tired of the game I’d stop, panting, and Big Man would scratch behind my ears. Sometimes he’d give me a belly rub.

Then Big Man took me to the Bad Place. When the wrapping came off, I found I had lost my tail! No chasing, no belly rubs, no laughs. I now chew on everything of Big Man’s. I laugh. He doesn’t. Serves him right.

Danger Man
Simon Lake spun the Lotus in an arching drift across the New York intersection and then repeated the move to drop behind the little red Covet. Over the car speaker central command chirped “Chasing your tail, very smooth move Mr. Lake.” “Thank you Miss Winters, we aim to please, we got eyes in the sky tonight?” “Front and center.” “Good. Please get a shot of this for my collection.” “Affirmative.” With that Agent Lake hit the break and release his two stingers. The Covet burst into flames and careened to a dead stop. He race pass it, on the right.

As a puppy, my owners used to laugh at my antics. “Aww, look at you, chasing your tail”, they’d chuckle.

Over time, as I grew up, I realised it wasn’t natural, and my silly little quirk was purely a result of their torment: They would have me chasing in circles, teasing me with toys, and whipping me into a frenzy until I was so confused, I was snapping at my own nether regions.

But, I am no longer a puppy.

And tonight, my owners are going learn what it means to be tormented.

And let’s see who’s laughing then!

Facebook yesterday announced a location based find a friend feature. The auto opt-in feature attempts to pair individuals who frequent the same locations for long periods of time.
Vincent “Big Vin” Poletti, current resident of the New Rochelle City Jail isn’t too sure about the new feature.
“I’m just sitting there minding my own business casing this marina warehouse, when I get a Facebook ping that Detective Sergeant Ed Carrol of the Harbor Unit is 20 feet away. Do you want to be his friend, it says. I didn’t even get a chance to say yes before he arrested me.

“What’s wrong, Axel?” Ursseanna asked when he collapsed into their study station.
“I had all I needed. Enough credits to get a shuttle off the battle base, Sixty thousand credits, and Flick blew it all to bits,” Axel said between gritted teeth.
“Well. You’re no worse off than you were a month ago, then.”
“Twenty years on this base, circling the galactic loop, and you’ll be back where you started. Like a giant ouroboros worm, you’re chasing your tail,” Axel said. “I want out before I end up like my parents, just doing the same thing for another twenty years.”

I made three random turns and he was still on me like a bad tattoo. I had a tail. I sped ahead to the roundabout and instead of taking a right I whipped around and came up behind him. Now I was tailing him. It didn’t last long. He hit the gas and was around and back on my bumper in no time. I floored it and grinned to myself as he saw me in his mirror. Back and forth we went until we ran out gas.

We both hailed cabs and I finally got to say “follow that car!”

We pulled over about an hour out of Barstow to enjoy the sunset.
In the distance, coyotes barked and howled.
I saw one running through the scrub, stopping and turning circles every few steps before racing along again.
“What do you think that coyote’s doing?” I asked my companion.
“Not a clue,” she said. “Ready to go?”
We got back in the car, and as I turned on to the road, we hit the whirling coyote.
We stopped, got out, and watched it twitch for a minute before it lay still.
I shrugged, we got back in, and drove off.