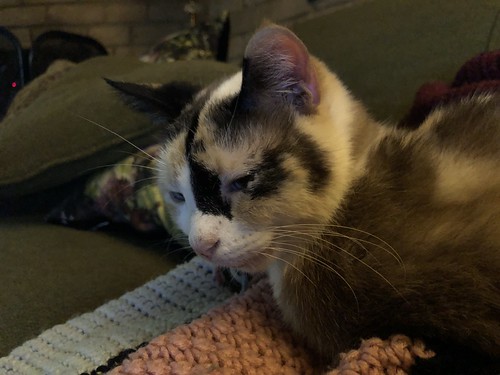 The business was blooming. They sold all sorts of plants to all sorts of people, even to a very important film and TV production company. Every time they crossed paths, they’d nod civilly. But she knew. She knew very well what he was up to. When she found him among the lines of lavender pots, looking rather blue, she smiled and left him there. The lavender would take care of that one problem she wouldn’t mention. And he would never steal from her again. She vaguely recalled him saying he was allergic to… mushrooms. Was it mushrooms? She nodded… civilly.

Business partners – that’s how I view our relationship although, truth be told, it’s a fairly unequal partnership.

We work on the basis of supply and demand: I make the demands, and she supplies whatever I ask for in a timely and efficient manner.

In return, she gets reasonable pay, board and lodgings, and the occasional perk. Personally, I think she does very well out of the arrangement.

Some would argue we should do things on a more equal footing, after all they say, marriage is all about give and take.

Well, she gives, and I take.

Over the years I have spent a considerable about of time in the woods with different flavors of pagans. In a fair number of these it is bad form to mix your pantheons, but it does occur from time to time. In most the attending deities are invoked as Lord and Lady this or that. Often the celebrants have chosen the magical name of Lady Moonbeam Willow River Raven. Even circles that adhere to conscience removal of colonialistic terms get tripped. I once pointed out Queen of the Witch seem to undercut that democratic PC-ness. They told me to shut the fuck up.

Partners in Crime is such a telling turn of a phrase. For me it’s my friend Jim. Over the last 40 years we have successful executed a number of financial endeavors. Sadly none has been actual criminal in nature. I can think of no one I would rather rob the Bank of England with. Or do a Thomas Crown Affair with. Come to think of it a road trip to Las Vegas might be pretty sweet. A thousand networks for the taking. All those years hacking UNIX servers would do the trick. And Paraguay is lovely this time of year

Partner
———
None fare well in the Queue who queue alone. One must have a partner, to hold one’s place if one steps out for a moment, and you will do the same for them, allies in the Great Wait. And when you grow old and infirm in the Queue, to support each other, and if it comes to it, drop out of the Queue a while for their sake, supporting them even if you must lose a hundred places, or a thousand.

For greater love hath no man than this, that he lose his place in the Queue for a friend.

I don’t like the word ‘victims’: It seems such a negative expression, one that negates the contribution of one party to the action and makes it somewhat meaningless.

It’s too passive, too one sided, and it doesn’t accurately describe the complex relationship between killer and casualty.

You see, those I despatch play an important role in the game: There can be no pursuit without the pursued, no control without resistance, no power without fear to feed it.

Those unfortunates who fall foul of my wickedness are never mere victims, they play their part as much as I.

As Linoliumanda’s song came to an end she pirouetted off the dance floor, oblivious of all the eyes staring at her.

A teacher walked into the middle of the room and said, “You have until the next song starts to ask someone to dance and then we will begin to assign dance partners.”

Billbert saw Marrissa and headed toward her with a smile but she walked right past him and put her arm around a boy he’d never seen before.

Suddenly, Linoliumanda was taking his hand and pulling him onto the dance floor. “Come on, Billbert. We can be partners.”

All of the partners in the law firm swore an oath of loyalty to the firm.
Young and strong and smart, they all wore identical rings with the seal of the firm.
Only 100 of the rings were ever made.
And only when a partner died would they pass the ring on to a new partner.
Every year, the juniors came into the meeting hall, challenging the partners to duels.
Usually, the partners won, but when a partner fell, their ring went to the junior.
They’d pull it off of their dead, cold finger and put it on their own.